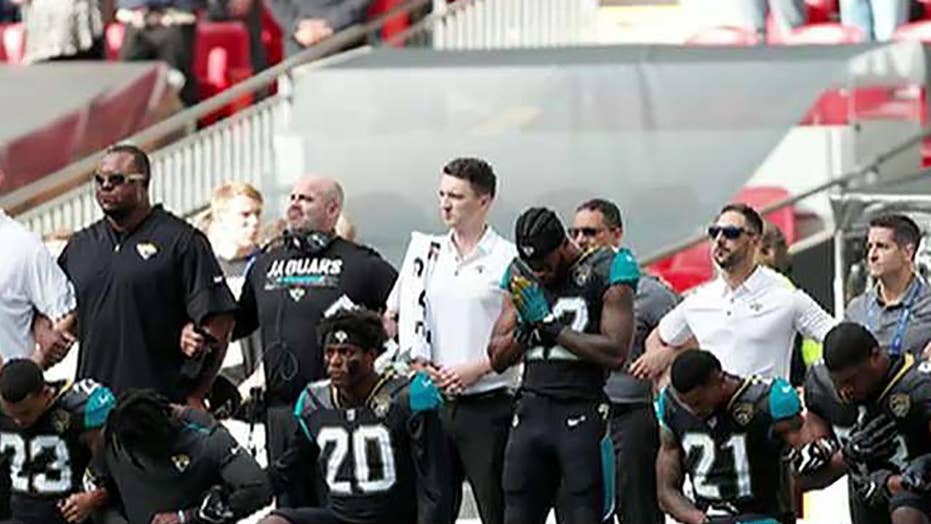 Sunday was a day unlike any other in NFL history, as the kneeling-for-the-national-anthem protest against racism and police brutality that Colin Kaepernick started more than a year ago reached new highs and/or lows, thanks to some well- and/or poorly-timed remarks from Donald Trump. The president urged owners to fire any “son of a bitch” who demonstrated during the national anthem and suggested fans send a message to the NFL by walking out of stadiums where players demonstrated.

The president’s crudity and choice to tackle this topic, rather than, say, nuclear conflagration or rescuing people from floods, is nearly as stunning as the folly of his assault on the prototypically American business institution known as the NFL. Just as perplexing is his attempt to curtail free speech, our most vaunted and valuable liberty, in the name of ensuring national anthems laden with “respect” for the flag, a symbol of the right to fight for freedom of speech.

In any case, several playings of “The Star-Spangled Banner” featured so many players taking a knee that they looked like they were in pre-game victory formation. Ironically, the day’s first game occurred at Wembley Stadium in England – the country that caused our founding fathers to write the documents whose principles were so questioned throughout this football Sunday.

Not far from where King George III issued edicts meant to limit American freedoms, Shahid Khan, the Jacksonville Jaguars’ Pakistani-American immigrant team owner, locked arms with his players before they played the Ravens, a team representing Baltimore, the city whose siege by England in the War of 1812 provided the backdrop for Francis Scott Key’s song. The football day ended just outside Washington, D.C. – home of the Redskins, whose team name and mascot is the subject of a separate racially fueled protest – where several black Redskins and many Raiders made their symbolic gestures.

Between the start and finish of Sunday’s slate of games, attention focused on who stood, linked arms, kneeled, sat and hid. On display was the truth that politics makes for strange bedfellows

Between the start and finish of Sunday’s slate of games, attention focused on who stood, linked arms, kneeled, sat and hid. On display was the truth that politics makes for strange bedfellows. For example, Patriots Owner Robert Kraft – a Trump supporter, who is Jewish but remained silent during Trump’s equivocation over the neo-Nazi protests in Charlottesville – criticized Trump’s criticism of NFL players who protest.

Meanwhile, Steelers Coach Mike Tomlin, an African-American, explained his team staying off the field during the national anthem in pre-game remarks that seemed to misapprehend the very meaning of freedom. “People shouldn’t have to choose. If a guy wants to go about his normal business and participate in the anthem, he shouldn’t have to be forced to choose sides. If a guy feels the need to do something, he shouldn’t be separated from his teammate who chooses not to. So we’re not participating today. That’s our decision. We’re going to be 100 percent.”

Except for Steelers offensive tackle Alejandro Villanueva, an Army veteran and West Point graduate, who stood outside the tunnel from the team’s locker room to show his allegiance to the flag.

In another oddity, the Tennessee Titans and Seattle Seahawks also both stayed in their locker rooms during the anthem sung by Meghan Linsey, who then knelt after completing the song. (NBC reported the Raiders wanted to take the same tack as the Seahawks, Titans and Steelers by waiting out the anthem in their locker room, then decided not to because violation of coin-flip protocols for primetime TV games would have incurred a 15-yard penalty, apparently too high a price to pay for maintaining principles.)

Perhaps the ultimate irony came when fans booed during the anthem. Trump’s whole point was to protect the sanctity of the pre-game national anthem ceremony, but his heightening of attention to this topic inadvertently led to a previously unthinkable display of disrespect, for the anthem itself and/or the freedom the song is supposed to represent.

David Jacobson is a freelance writer and marketing communications consultant, working primarily in sports and social causes. Follow him at @CoachDaveJake.