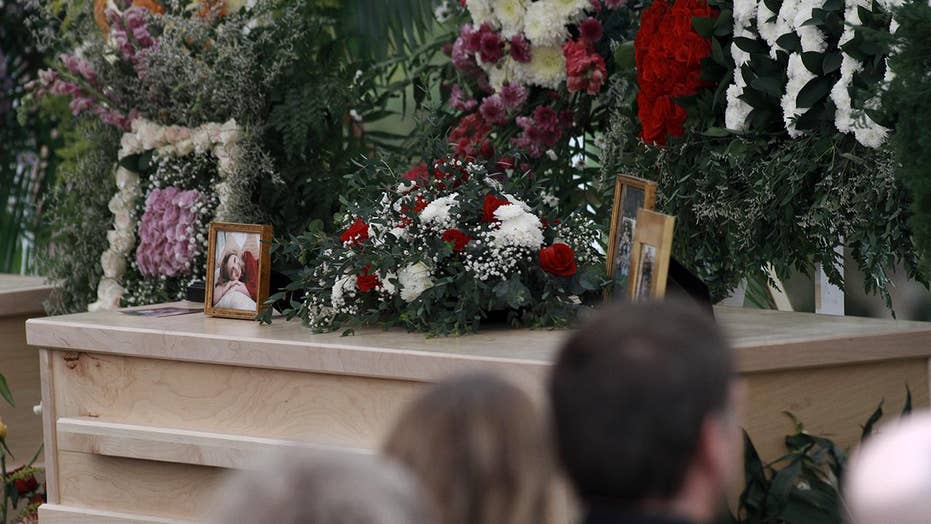 Hundreds of mourners have gathered in Mexico for a second day of funeral services for the American victims; Jonathan Hunt has the latest on the investigation.

The massacre of nine Americans – including six children – in Northern Mexico this week was the latest shocking reminder of a stark reality: Our next-door neighbor has a huge, dangerous organized crime problem.

In response, President Trump was understandably angry, saying: “This is the time for Mexico, with the help of the United States, to wage WAR on the drug cartels and wipe them off the face of the earth.”

The president’s goal is right, but the target is wrong.

TUCKER CARLSON: AMERICA'S SLOW-MOVING DISASTERS ARE DRIVEN BY ADDICTION – IS IT STILL WORTH BEING SOBER?

The key to destroying the Mexican cartels is in America not Mexico.

As long as Americans send an estimated $19 billion to $29 billion in drug money a year to Mexico (as estimated by ICE) there will be cartels willing to take it. Kill one generation of cartel leaders, and a new generation will emerge.

Since 2006, an estimated 150,000 Mexicans have been murdered in drug wars, according to the Congressional Research Service (CRS).

The cartels have so much money and so much organized power that they are virtually a state within a state.

I spoke this week with journalist Sara Carter, who covered the border for years, about how dangerous these cartels truly are. Originally, I was going to reserve the conversation for my Inner Circle subscription service, which I want to invite you to join. But I thought this was so important – such a timely topic and so central to the future of the United States – that I wanted to share it with everybody here.

The Sinaloa Cartel earns more than $3 billion a year, according to the CRS report. As long as that remains true, the cartel’s capacity to kill potential opponents and intimidate Mexicans who would like to live in a safe, law-abiding society is massive.

We have a deep interest in starving out the drug cartels before they bring their corruption and their violence further into the United States.

For example, in a recent confrontation in Culiacan, Sinaloa Cartel gunmen overwhelmed a patrol of police and forced them to release their prisoner — the son of the Sinaloa drug lord El Chapo’s son, Ovidio Guzmán López. About the same time, some 55 prisoners were escaping from prison across town, and there was another prison break in another part of the country.

Let me be clear: This lawlessness and violence isn’t being fueled by Mexico. American money and American drug addiction have paid for the growth of huge criminal organizations of extraordinary violence and cruelty.

In the case of heroin, the Drug Enforcement Administration estimates 91 percent of heroin in the U.S. comes from Mexico. Sam Quinones’ remarkable book “Dreamland: The True Tale of America’s Opiate Epidemic” is an astonishingly clear story of the rise of sophisticated modern marketing and organizing by the Mexican pioneers of heroin importation.

The tragic reality is we have been fighting a “war on drugs” since President Richard Nixon declared it in June 1971. For 48 years, the official American position has been to stop addictive drugs. Yet, many of our policies undermine that war and, in fact, guarantee defeat.

When San Francisco gave out 5.8 million needles in 2018 the city was undermining any effort to stop drugs coming from Mexico. No one considered how much money went to the cartels from the substance that filled those 5.8 million needles.

Everyone who advocates for open borders is advocating for easier access and greater profits for the drug cartels. Everyone who opposes controlling the border is actively making life easier for violent cartels. A controlled border could stop most of the drugs coming north and most of the guns flowing south. So-called “sanctuary cities” are in effect “drug trafficker sanctuary cities.”

Anti-police leftists like Mayor Bill De Blasio of New York make life easier for the drug cartels. A demoralized, intimidated police force has no hope of stopping the type of arrogant murderers and torturers who are challenging the Mexican government for control of the country.

Reforming our criminal justice system, which I strongly support, does not mean we have to accept the legalization of heroin, cocaine, fentanyl and other deadly drugs. It means we must find economic sanctions – and effective treatment – for drug users while retaining much tougher punishment for those making money while enriching the drug cartels.

We have a deep interest in helping the Mexican government defeat the drug cartels and regaining control over all of Mexico.

We also have a deep interest in starving out the drug cartels before they bring their corruption and their violence further into the United States.

If we are serious about wiping the drug cartels off the face of the earth, the place to start is the United States not Mexico.

If American illegal drug purchases fell radically – even to less than a billion a year – the cartels would collapse because they would not have the money to pay their troops and to support their infrastructure.

The central battlefront in this war is dollars in America – not violence in Mexico.