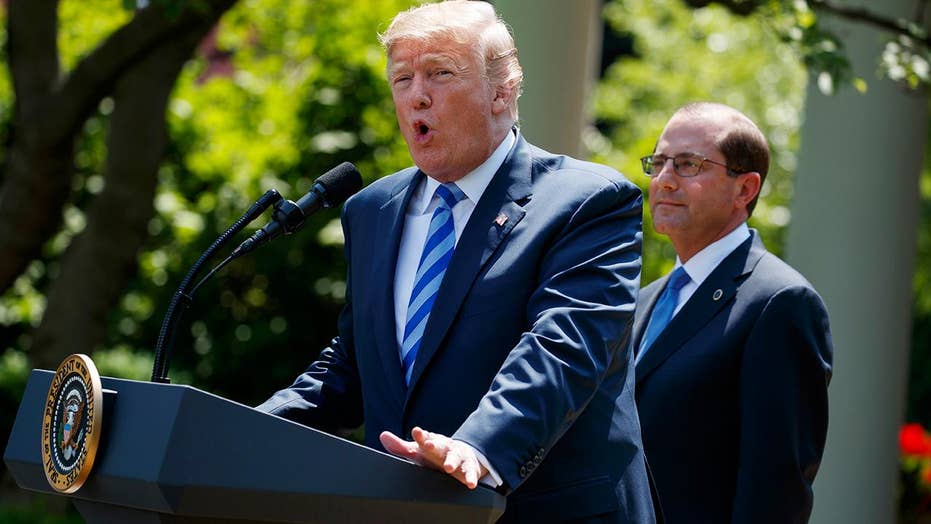 Is Trump keeping his promise on prescription drug prices?

President Trump’s drug price reduction plan – American Patients First, which he announced last week – is an impressive and thorough effort to fix the underlying dynamics in the pharmaceutical marketplace that have made drugs too expensive for most Americans.

The Trump administration’s thorough understanding of what is actually causing these price increases – which the 44-page plan lays out concisely – separates President Trump’s sophisticated and serious plan from the Democrats’ far-left calls for price controls and foreign importation of potentially dangerous drugs.

In fact, while affordability is a challenge, pharmaceutical innovation is producing miracle cures for cancer and other diseases. It is vital that we keep this pipeline of innovation running strong to continue the development of new cures and treatments that allow us to live longer, healthier lives.

Encouragingly, President Trump’s plan follows the same “1,000-step” approach in health care that I have advocated for more than a decade (see my 2003 book, “Saving Lives and Saving Money.”

The health system is too complicated to fix with one giant bill. Nobody knows enough. Rather than trying to develop one giant bill, the Trump administration is taking many different meaningful, smart, measured actions that collectively will have an enormous impact.

President Trump has already made progress in controlling drug costs by streamlining the approval process for generics ($8.8 billion in savings) and Medicare reforms (an estimated $320 million savings in out-of-pocket costs for seniors in 2018 alone.)

The president’s new plan builds upon these successes by addressing some of the core problems in the drug market that are leading to patients having to pay more and more for treatments.

One of these major problems is that there is currently little to no pressure to bring down the list prices of drugs. In fact, almost all the incentives in the current system drive prices up.

A list price for a drug is sort of like the sticker price on a car. The actual sales price to the customer is going to be lower. However, with drugs the real price that is paid by the initial payer – usually a pharmacy benefit manager (PBM), insurer, or the government – is much, much lower than the discount you would see on a car. Sometimes it is a 50 percent cut to the list price, or more.

Pharmacy benefit managers make much of their money by keeping a portion of the discount that they negotiate for their clients. This means PBMs benefit from higher list prices, since it allows them to negotiate steeper discounts.

Meanwhile, the co-pays that patients pay at the pharmacy counter are usually based on the list prices of the drugs, not the discounted rate. This is because the discounts made earlier in the transaction chain are secret. As a result, patient out-of-pocket costs are increasing. At the same time, the “middlemen,” as President Trump calls them, are making more money.

Insurers and PBMs also sometimes negotiate rebates from drug manufacturers for putting their products on certain drug tiers or offering the manufacturer’s drugs to customers instead of a competitor’s.

But once again, while those rebates should lead to lower premiums, patients don’t directly see the benefit at the pharmacy counter, since their out-of-pocket costs are often based on the list price, not the often-discounted actual price.

President Trump’s plan proposes a variety of measures to create downward pressure on list prices, including changing the rules governing the use of rebates, increasing transparency in drug pricing within Medicare, and establishing ways to make sure patients know the price they will pay for drugs when choosing treatments.

The president’s plan also takes steps to lower out-of-pocket costs for patients. One of these reforms would keep Medicare Part D contracts from preventing pharmacists from telling patients when they could pay less out of pocket for drugs by not using insurance.

Other reforms in the plan would make it even easier for generic alternatives to enter the market and eliminate legal barriers that prevent the formation of value-based contracts (in which payers would pay manufacturers based on a treatment’s effectiveness).

Finally, the president’s plan calls for cracking down on foreign governments that use their single-payer government monopolies to extort below-market payments to American drug manufacturers (and ultimately, American citizens).

It is important to understand that many foreign governments take actions that go far beyond negotiating. Many go so far as to threaten to steal U.S. companies’ intellectual property and give it to domestic competitors if the companies do not agree to the foreign governments’ price demands.

The net effect is that foreign countries are benefiting from U.S. pharmaceutical innovation without having to pay their share of the research and development costs that produce new treatments. This raises the cost for Americans, who pay for research for the rest of the world.

President Trump has committed to cracking down on the foreign free-riding problem as part of his administration’s overall much tougher posture on foreign government cheating in international trade.

Along with Health and Human Services Secretary Alex Azar, President Trump deserves praise for releasing a serious and thoughtful plan to tackle high drug prices. I highly recommend that everyone read this report.

It is a perfect example of how the Trump administration is working to reform our health-care system to save American lives and money.