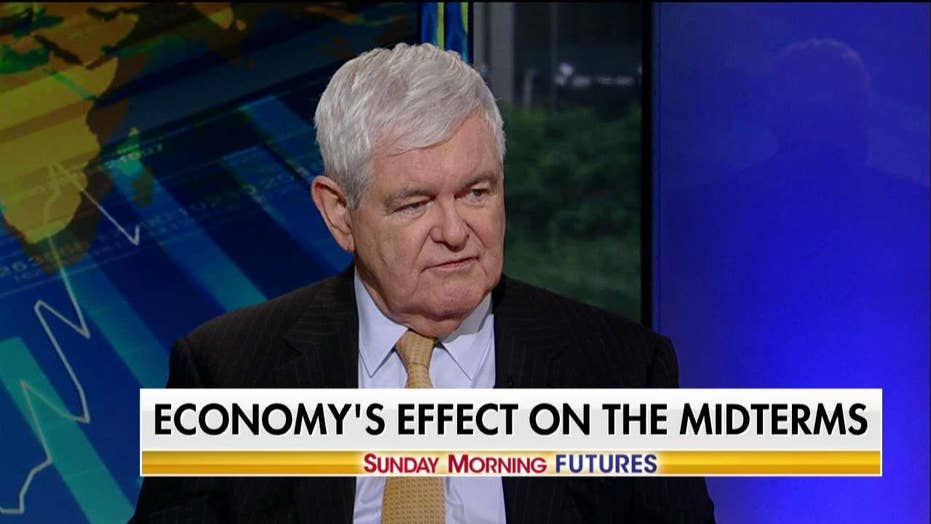 Gingrich: We Are Closer to a 'Red Wave' Than a 'Blue Wave'

Every time members of the elite media mention the “blue wave” that is supposedly coming in the Nov. 6 congressional elections, they seem more and more delusional. In fact, as the elections draw closer, Republican victories are looking much more likely.

In December, it seemed plausible that Democrats would make gains – the opposition party often grows in the first midterm elections of a new presidency. The polls at the end of 2017 also supported the idea. It made sense that the elite media would pick up the “blue wave” theory as a continuation of the reflexive anti-Trump narrative they had touted throughout Trump’s candidacy and first year in office.

However, the “blue wave” storyline was created before many of the benefits of the Trump-Republican agenda began to take hold, and it’s going to be increasingly difficult to convince Americans their lives aren’t getting better.

The passage of the Tax Cuts and Jobs Act, combined with President Trump’s massive deregulation effort, has led to the lowest unemployment rate in 18 years (and the lowest black unemployment rate ever recorded). Wages are increasing, business and consumer confidence are soaring, and more and more Americans are starting to realize the huge disconnect between the America described by the mainstream media and the America in which they are living.

The “blue wave” storyline was created before many of the benefits of the Trump-Republican agenda began to take hold, and it’s going to be increasingly difficult to convince Americans their lives aren’t getting better.

Remember: When Republicans were debating the tax cuts, the elite media and the Democrats claimed working Americans would not benefit from the reduction of the corporate tax rate. They said the corporate tax cut was a giveaway to big business. However, as of Monday, 587 companies had announced “pay raises, bonuses, 401(k) match increases, expansions, and utility rate reductions,” as a result of the tax cuts, according to Americans for Tax Reform.

Additionally, the media and the left claimed middle-class Americans would not benefit from the changes to the personal income tax brackets, yet most median-income families of four will save more than $2,000 in taxes starting this year. (This is what House Minority Leader Nancy Pelosi, D-Calif., called “crumbs.”)

As I write in my new book, “Trump’s America: The Truth About Our Nation’s Great Comeback,” the media are missing (or ignoring) a historic, positive period in our history. I say in my book:

“Under President Trump, America is experiencing a great comeback. After nearly a decade of recession and tepid job creation, our economy is booming. In addition, ISIS has been effectively destroyed, illegal immigration is down, our military is being rebuilt, and our veterans are getting the health care and support they deserve. The administration is achieving success across a variety of sectors daily.

“Perhaps more important than these successes, however, is the reinvigoration of America’s patriotic sense of self, which the rise of Donald Trump has awakened. Our country is being reconnected to our founding principles, the values that made America the greatest country in the world, and in doing so, is coming to understand just how destructive the last few decades of elite leadership have been to our freedom, prosperity, and safety.”

Much of the media’s hostility to the Trump agenda stems from their contempt for President Trump himself. The elite media have always opposed him, and it has become a learned behavior. Reporters’ shared inability to get over their own biases against the president further contrasts the media’s portrayal of the nation and the public’s perception.

As I write in my book:

“Trump has had to fight the media on a daily basis because its members are overwhelmingly, bitterly, and actively opposed to him. In fact, the media has reached a point where attacking the president is the default action – no matter what the story is about. It has become muscle memory for reporters, anchors, editors, and producers to go on the offensive.

“Yes, President Trump uses strong, sometimes harsh, language when dealing with his opponents (including the media). I am never surprised by the hostile back-and-forth over the president’s words and the media’s hurt feelings. Yes, the president, as a businessman in politics, doesn’t speak or act like a typical politician. After more than two years of getting to know him, you would think the media would be used to this by now. Still, they fill airwaves and news pages with panicked outrage anytime President Trump describes a domestic or foreign issue in blunt, realistic, or indelicate terms.

“Clearly, the media is having a hard time adjusting to President Trump’s everyday behavior. To give them the benefit of the doubt, he is a unique commander in chief. However, it is astonishing to see the complete disconnect between the mainstream media and reality when it comes to the substance and outcomes of President Trump’s policies.”

I have no doubt the elite media and the left will continue to prop up their “blue wave” message and keep attacking President Trump and Republicans at every opportunity. However, this will only widen the gap between them and the rest of the country.

When Americans go to the polls Nov. 6, I suspect the “blue wave” will break against the great comeback.