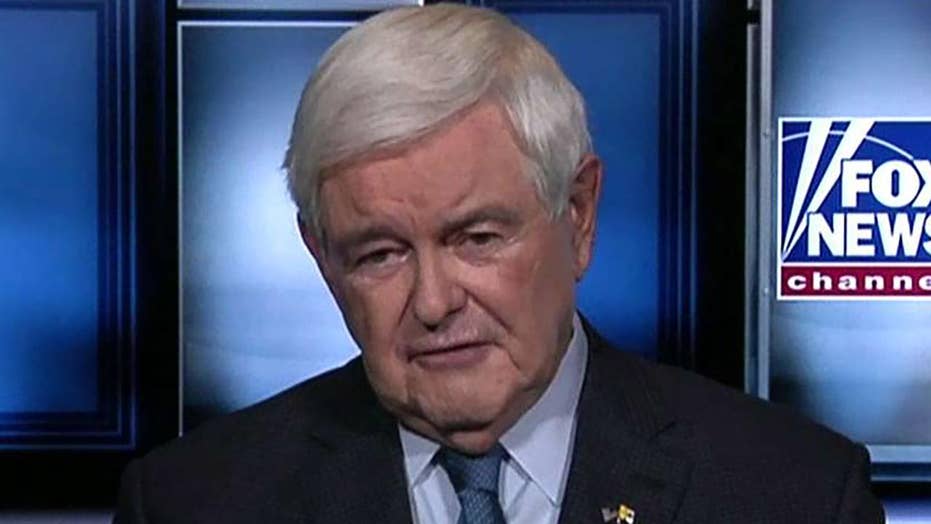 The fake impeachment movement taking place is part of an ongoing effort to drive President Trump from office. It is part of a determination on the left that Trump must be expelled from the White House.

This coup attempt – which is exactly what it is – has nothing to do with evidence or any single accusation. As House Speaker Nancy Pelosi said when asked what she would do if the whistleblower accusation involving Ukraine collapsed, “We have many other, shall we say, candidates for impeachable offense in terms of the Constitution of the United States, but this one is the most understandable by the public.”

In other words, no matter the evidence and no matter how many times President Trump and his team knock down the attack, there will always be another effort designed to drive him from office.

GREG JARRETT: DID MUELLER LIE TO CONGRESS ABOUT MEETING WITH TRUMP BEFORE HE TOOK THE SPECIAL COUNSEL JOB?

This "destroy President Trump" coup effort developed in the first 24 hours after the 2016 election.

On Wednesday, Nov. 9, 2016, a left-wing group announced emergency protests against Donald Trump in six cities that day. Within 24 hours of Trump being declared president, left-wing activists were gathering in Chicago, Los Angeles, Sacramento, New York City, San Francisco, and Albuquerque. As the organizers at Act Now to Stop and End Racism (ANSWER) announced:

In a shock result, Donald Trump has been elected president - but the people can rise up and defeat his bigoted, extreme right-wing agenda! The ANSWER Coalition is mobilizing across the country to organize and take part in emergency actions.

As one of my colleagues discovered, these gatherings were just the beginning. Below, we’ve compiled a partial list of the first week’s intense reaction from the left.

The left’s first reaction was simply to protest Trump's election. It was essentially a protest against democracy and our electoral system.

After weeks of sometimes violent protests, the anti-Trump movement realized that simply shouting and causing public nuisance wasn’t going to get them what they wanted. It didn’t take long for the members of the left to find impeachment was the best vehicle for their coup to drive the president from office.

By Dec. 15, about five weeks after the presidential election and roughly five weeks before the presidential inauguration, Vanity Fair published an article by Emily Jane Fox headlined “Democrats are Paving the Way to Impeach Donald Trump.” The focus at that phase of the effort was the family business, the Trump Hotel in Washington, D.C. and possible personal financial improprieties (all of which disappeared within a few weeks and were replaced by "Russian collusion" as the focus of Democratic coup efforts).

By the day of the inauguration, January 20, 2017, the impeachment hunger was great enough that the Washington Post headlined Matea Gold’s article "The Campaign to Impeach President Trump Has Begun."

As I wrote in my bestselling book, "Understanding Trump and Trump’s America," this effort to drive President Trump from the White House has never been about finding truth. It has always been about subverting the will of the people.

You are not watching an impeachment process. You are in year three of an attempted coup d’etat, which started the day the president was elected. The evidence is there for anyone who wants to look.

“Trump Victory Sets Off Protests On Both Coasts” - CBS Miami

“Anti-Trump Protests Break At The University Of Michigan” - NBC 6

“Louisville’s “Not My President” Protest Wraps Up” - WLKY

“Vanderbilt Students Protest Trump, Shout ‘Not My President’” – The Tennessean

“Round Three of Anti-Trump Protests in Dallas” - WFAA

“Dozens Protest in Olympia: ‘No KKK, No Fascist USA, No Trump’” - My Northwest

“Anti-Trump Protesters March at VCU: ‘We Do Not Respect Blatant Sexism’” - CBS 6

“Day Five of Anti-Trump: Protests Continue in a Number of Cities” – NBC