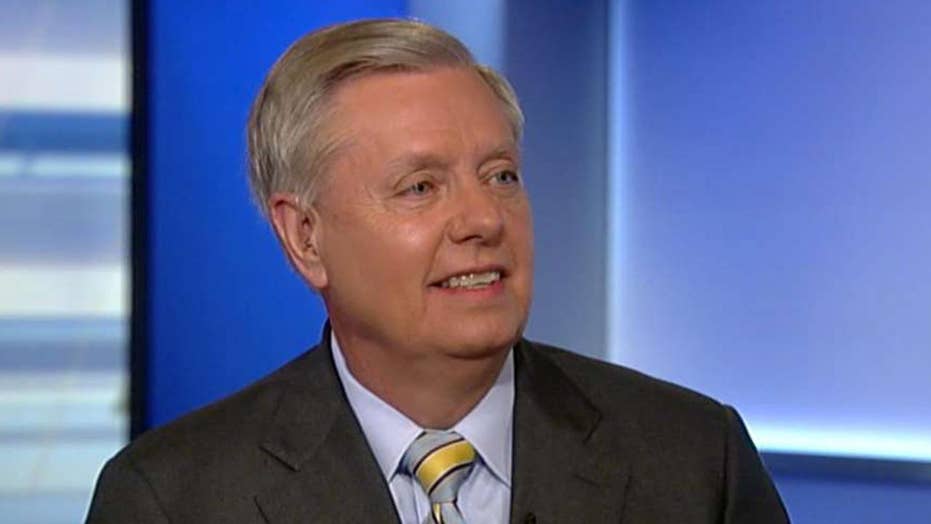 Graham: Let's get someone like Mueller to investigate FISA abuse scandal

The political and media elite in America have some explaining to do.

As the reality sinks in that the Trump campaign didn’t collude with Russia during the 2016 election – and that no obstruction of justice charges levied against President Trump are forthcoming – Americans are going to start asking why we have been lied to for two years.

For the first half of President Trump’s first term, we have seen a wildly hysterical news media, which have consistently operated under an assumption of guilt rather than innocence. They have regularly reported unsubstantiated, politically motivated accusations as facts. Some have gone so far as to repeat accusations that the president of the United States has committed treason and that he would be the first sitting president to be jailed.

We have also seen a concerted effort by the Washington establishment and the bureaucratic deep state to hinder the president’s ability to lead by perpetuating the phony collusion narrative – which appears to have been concocted by the outgoing Obama administration.

In the wake of Special Counsel Robert Mueller’s findings, Americans deserve to hear the truth.

Mueller’s report should spur a series of parallel investigations.

First, Congress should find out how claims this bogus were able to consume and perpetuate through the Justice Department, FBI and our intelligence agencies.

The Obama administration reportedly knew that Russians were trying to influence the election. Why did officials decide to spend energy pursuing a false narrative rather than aggressively combatting Russian hacking efforts during a presidential election cycle?

The group at the FBI that has doggedly pursued the false collusion story is the same group that let Hillary Clinton slide on deleting official emails, creating an illegal computer server and destroying evidence of her wrongdoing.

It certainly appears now they were simply trying to hurt the Trump campaign. How involved was President Obama himself – or Vice President Joe Biden?

Why has former Director of National Intelligence James Clapper been so convinced that the collusion story was real? For that matter, why did FBI Director James Comey break FBI protocols and seek to spread the collusion lie?

Congress should call these people in and ask them under oath.

Additionally, Congress should fully make the Mueller report and all its supporting documents public – to the extent that the law, national security and decency allow. The agents who wrote and signed the Federal Intelligence Surveillance Act warrant applications that were based on the absurd, unsubstantiated Christopher Steele dossier should be held accountable.

As a part of all this, members of Congress should pressure their colleague Rep. Adam Schiff, D-Calif., to step down as chairman of the House Intelligence Committee. Even after Mueller’s findings have been made public, Schiff has continued to lie to the American people about alleged secret intelligence. He has no business knowing our national secrets if he’s willing to fabricate them for political gain.

Second, Congress should look at the wide gap between the Justice Department’s willingness to aggressively pursue phony allegations about the Trump campaign while completely ignoring documented lawbreaking by the Clintons.

The group at the FBI that has doggedly pursued the false collusion story is the same group that let Hillary Clinton slide on deleting official emails, creating an illegal computer server and destroying evidence of her wrongdoing. If fully uncovered, I expect the extent to which these agents were motivated by political bias would be astounding.

Finally, the third investigation should be completed by the news media.

The major media outlets should form a commission – perhaps with Pew Research or the Poynter Institute – to examine the role the media played in spreading falsehoods for the last two years. It’s clear that the media were either handily used by – or fully in league with – the political enemies of President Trump.

At best, reporters, editors, anchors and producers failed their due diligence in vetting the heaps of anonymous sources on which they frequently relied. At worse, they were just seeking to make money by influencing – rather than informing – the American people.

In either case, the collusion story will bring long-lasting damage to the media’s credibility and the public’s trust. At a minimum, The New York Times and The Washington Post should return the Pulitzer prizes they received for “breaking” the collusion story.

It would be intolerable for media members to walk away from this disaster and pretend they had nothing to do with it – or claim they were just reporting the news of the day. When the news media collectively decide something is “a fact,” it creates enormous power promote falsehoods. This is exactly what happened here.

Now, I have been very critical of Mueller’s methods – and his decision to bring on a host of ardently liberal lawyers to conduct this investigation. The fact that these determined lawyers were unable to find anything is remarkable. Independent Counsel Ken Starr laid out 11 allegations against President Bill Clinton at the end of his investigation – including five obstruction of justice charges.

The results of the Mueller investigation make it clear to me that the world in Washington is about to change dramatically. The president will have the Mueller report as a shield against the circus of investigations that congressional Democrats are planning, and the post-Mueller Trump White House will be able to focus on a much wider variety of important things.

For example, President Trump will now be able to aggressively combat real Russian efforts to influence our elections. He will be able to better deal with the crumbling civilization in Venezuela. He will be able to focus on better ways to compete with China and denuclearize North Korea.

I have no doubt, the post-Mueller world is going to be very good for President Trump, Republicans and all Americans.