RussiaGate crashed like a lead (or misled) balloon because it was never about anything other than stopping President Donald Trump. The press pushed the Russian Collusion Delusion because they weren’t reporting. They were crafting a narrative.

It’s the same strategy they used to blast border security. And it’s just as dishonest. In print, online and on TV, the news media has pounded the idea that there is no border crisis. There was little difference in coverage between openly liberal organizations and the traditional outlets.

Far left Mother Jones wrote in January: “There Is No Crisis on the Southern Border. None.” Liberal HuffPost declared, “Trump’s Border Crisis Is A Myth.” Never Trump conservative Max Boot called it a “faux crisis,” in a piece for The Washington Post. Forbes ran two op-eds in a week from Stuart Anderson, executive director of the National Foundation for American Policy, pretending, “There Is No Border Crisis.”

MEDIA HARASSED TRUMP DAILY WITH BOGUS RUSSIAGATE CLAIMS. NOW THEY SAY IT'S THEIR CRITICS WHO GOT STORY WRONG

Actual news media pushed the same narrative. CBS quoted President Obama’s former Homeland Security chief to write, “There’s no security crisis near the southern border.” CNN's Chief White House Correspondent Jim Acosta went to the border wall to argue, “I don’t see anything resembling a national emergency situation.” He didn’t seem to realize that doing so in front of the wall made the case for the wall.

CNN’s “New Day” even criticized Trump for eating during the crisis. Senior Political Analyst John Avlon mocked that the president was “at Mar-a-Lago at the omelet bar, also not exactly communicating urgency.”

On March 4, CNN declared that the migrant caravans “appear to have fizzled out.” The story quoted a Homeland Security official saying “10,000 undocumented migrants” were heading to the U.S., just dispersed. But AP wrote only yesterday that had changed: “A new migrant caravan of about 2,500 people was making its way through southern Mexico on Tuesday, headed for the U.S. border." 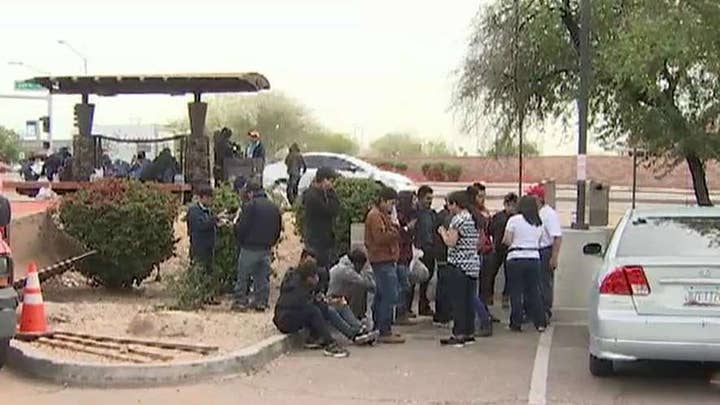 MSNBC correspondent Jacob Soboroff reported the liberal position from the border in December, “Critics of President Trump's border policy say no barrier, including steel just like this, will do anything to solve the humanitarian or security crisis.” He blasted the president’s position as “racist” as NBC News reporter Geoff Bennett tossed out the term “xenophobic.”

The New York Times ran several stories to set the narrative: “Is the Border in Crisis? ‘We’re Doing Fine, Quite Frankly,’ a Border City Mayor Says,” went one. “Border Wall Is Out of Sync With the Southwest’s Changing Politics,” read another. And in case that wasn’t clear, “On the Border, Little Enthusiasm for a Wall: ‘We Have Other Problems That Need Fixing.’”

Those ran in January or June last year. Now the fight is done for a while and The Times grows marginally more honest. “Border at ‘Breaking Point’ as More Than 76,000 Unauthorized Migrants Cross in a Month,” went a story from early March.

The Washington Post was no different. In January, it ran an analysis headlined: “Trump used the Oval Office to try to create a border crisis.” Last June it mirrored The Times approach. “The president says there’s a border crisis. This border city begs to differ.” It also included a veritable caravan of opinion pieces pushing for open borders in some form or another.

Once more, now that the issue has been temporarily resolved, we get more honesty. “Democrats struggle to address rising border apprehensions as they seek to counter Trump on immigration.”

With caravans returning, look for the “neutral” press to argue that they aren’t really there, aren’t a threat and that open borders would solve everything. Just like before. Anything for the narrative.