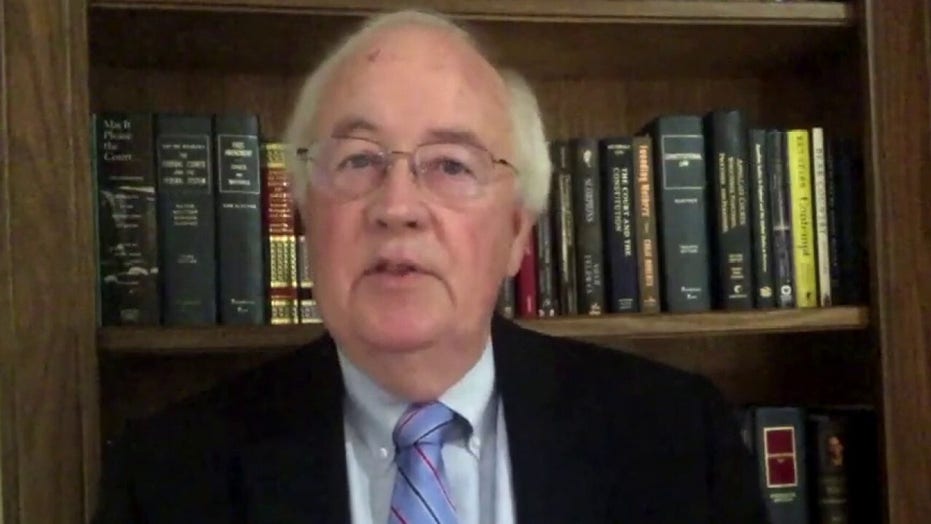 Starr: Barr did exactly what he should have with Flynn case

This Sunday we will learn if the venerable, oldest-of-its-kind Sunday interview show “Meet the Press” needs to change its name.

Last Sunday, host Chuck Todd’s hatred of President Trump went over the top and evolved from mere snarky comments, biased questions and stacked information into an outright lie about the attorney general of the United States.

No one who has watched conservatives like Sen. Ron Johnson slug it out with Todd could be surprised at the level of hostility the NBC moderator feels toward conservatives and Republicans in general – and President Trump in particular. But hostility turned to clear dishonesty when Todd distorted a recording of Attorney General William Barr from earlier that week.

TIM GRAHAM: COULD NBC'S CHUCK TODD BE ANY LAZIER? 'MEET THE PRESS' HOST RUSSERT MUST BE ROLLING IN HIS GRAVE

Todd played an edited excerpt of Barr during a CBS interview. Barr was being questioned over his decision to drop the case against former National Security Adviser Lt. Gen. Michael Flynn – who the Obama administration’s FBI had illegally targeted for a politically motivated prosecution.

According to the AP:

“When Barr was asked by reporter Catherine Herridge what history would say about the decision, Barr replied that ‘history is written by the winner. So it largely depends on who’s writing the history.’

“Todd said that he was struck by the cynicism of that answer.

“'It’s a correct answer,’ Todd said. ‘But he’s the attorney general. He didn’t make the case that he was upholding the rule of law. He was almost admitting that, yeah, this is a political job.’

“However, 'Meet the Press' didn’t include Barr’s full answer to Herridge’s question. He went on to say: 'But I think a fair history would say that it was a good decision because it upheld the rule of law. It upheld the standards of the Department of Justice, and it undid what was an injustice.’

“In other words, Barr actually said what Todd accused him of not saying.”

“Compare the two transcripts … Not only did the AG make the case in the VERY answer Chuck says he didn’t, he also did so multiple times throughout the interview.”

“Sleepy Eyes Chuck Todd should be FIRED by “Comcast” (NBC) for this fraud. He knew exactly what he was doing. Public Airwaves = Fake News!”

"Meet the Press" responded to the DOJ on Twitter saying, “You’re correct. Earlier today, we inadvertently and inaccurately cut short a video clip of an interview with AG Barr before offering commentary and analysis. The remaining clip included important remarks from the attorney general that we missed, and we regret the error.”

Todd also apologized on air Tuesday, claiming he didn’t edit the recording. It’s nice that the show admitted fault – but this wasn’t a simple error. Todd saw an opportunity to smear the attorney general, and he eagerly did so – without exercising the most basic journalistic practice of reading the full transcript. Further, as Steve Krakauer of Fourth Watch noted, there is a huge audience difference between smearing the attorney general on network television and then apologizing on Twitter:

“It has 3,300+ RTs, but likely has not been seen by even a small portion of the accounts 630,000+ followers, because a reply is only seen by mutual followers of both accounts. 'Meet The Press' has millions of viewers on NBC every Sunday, and another several hundred thousand through multiple re-airs on MSNBC. This mistake will not appear corrected for those viewers.”

This is a clear crossroads for Chuck Todd, NBC and “Meet the Press.”

“Meet the Press” is a remarkable institution of great prestige going back to its creation by Martha Rountree on Nov. 6, 1947. During the Tim Russert era, it was always fun to do the show. Russert off camera was a great host. When my in-laws visited, he went out of his way to make them feel at home even if they weren’t Buffalo Bills fans.

It was often tough being grilled by Russert, but I never thought he cheated. What Chuck Todd did last Sunday was cheating.

It’s apparent that, unlike his predecessor, Todd never quit being a Democratic operative when he decided to also become a pseudo-journalist.

Russert had also previously worked in politics, but he made real effort to leave his past work behind him and take fairness, objectivity and the truth seriously.

Todd has an opportunity next Sunday to apologize again to the American people for lying to them – and to Attorney General Barr for defaming him. "Meet the Press" has a considerably larger audience than Twitter or a weekday program.

It will be a real test of NBC, “Meet the Press” and Todd to see if they value honesty and want to regain some of the country’s trust.

If they don't, they will reinforce the belief that the news media have degenerated into creators of fake news that cannot be trusted.

It will be an important Sunday.