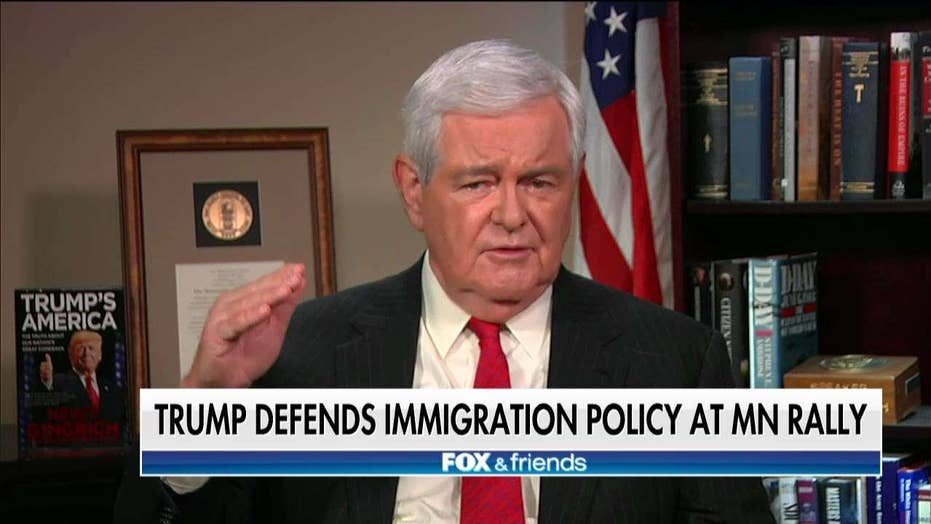 Gingrich Calls Out 'Remarkable Hypocrisy' From the Left on Immigration

Republicans have the chance to secure a major victory and expand their 51-49 majority in the U.S. Senate in the November midterm elections – largely because Democrats are advocating  radical, impractical and unpopular immigration positions.

As more and more Democrats throw their support behind so-called sanctuary cities, abolishing U.S. Immigration and Customs Enforcement (ICE), and promoting open borders, more and more Americans are expressing their vehement opposition to these positions.

Most recently, in their fervor over the child-detention issue, every Senate Democrat scrambled to co-sponsor the Keep Families Together Act, sponsored by Sen. Diane Feinstein, D-Calif. They did this partly to rebuke President Trump and partly to appease the growing radical wing of the Democratic Party – even though the bill proposes half-baked, open-border policies that very few Americans support.

Gabriel Malor wrote an eye-opening piece for The Federalist describing how devasting the Feinstein bill would be for our country it were passed.

The key purpose of the fall Republican Senate campaign should be to communicate how totally unacceptable the radical Democratic views are and how radically they would change America if they succeed.

Malor writes: “Every Senate Democrat has now signed on to cosponsor a bill written so carelessly that it does not distinguish between migrant children at the border and U.S. citizen children already within the United States. The bill further does not distinguish between federal officers handling the border crisis and federal law enforcement pursuing the ordinary course of their duties.”

The bill would negatively impact virtually the entire United States because it sloppily defines its geographic scope as “at or near the port of entry or within 100 miles of the border.”

A recent Harvard-Harris Poll conducted by Mark Penn (who is not Republican) clearly shows that most Americans overwhelmingly disagree with the radical Democratic immigration agenda.

The results are clear: 64 percent of registered voters said people who cross the border illegally should be sent back to their home countries. Only 36 percent said they should be allowed to stay. This result doesn’t significantly change when children are involved (61 percent to 39 percent).

These numbers show how radical and out of sync the central planks of Democratic immigration platform truly are.

Byron York of the Washington Examiner has done an excellent job of describing the disconnect between the views of radical Democrats (including the media) and those of the American people – particularly with regards to the wide American support of President Trump’s immigration policies.

I have written a strategy paper citing the work of York and Malor that describes how Republicans must use the facts about what Americans think regarding immigration policy and clearly communicate how and why the Republicans are right and the Democrats are wildly wrong.

The elite media is so biased that it is artificially propping up an increasingly radical Democratic Party, while artificially suppressing the issue popularity of the Trump team.

So the key purpose of the fall Republican Senate campaign should be to communicate how totally unacceptable the radical Democratic views are and how radically they would change America if they succeed.

Furthermore, Americans believe sanctuary cities increase crime, by a margin of 64 percent to 36 percent. This is something that the House and Senate should vote on as often as possible.

The movement to abolish ICE is also a completely loony Democratic idea that is rejected by the American public 69 percent to 31 percent. Republicans should point out that ICE has been an important part of combatting the opioid crisis and fighting drug cartels, which are destroying American families and communities across the country.

In 2017 alone, ICE seized roughly 2,400 pounds of deadly fentanyl. Democrats should be made to answer why they think dangerous drugs should be allowed to come in the country.

Every Republican challenger in the November Senate elections should get a copy of Feinstein’s open-borders bill and carry it to every event, press conference and debate. Democratic incumbents should be forced to explain why they agreed to co-sponsor a bill that will gut our ability to enforce immigration laws when 70 percent of Americans support more stringent border enforcement.

Across the board, public support for Republican immigration positions ranges from a low of 60 percent to a high of 84 percent.

These are winning positions. The Democrats cannot win on these issues if Republicans have the courage to ignore the elite media and focus on the American people.