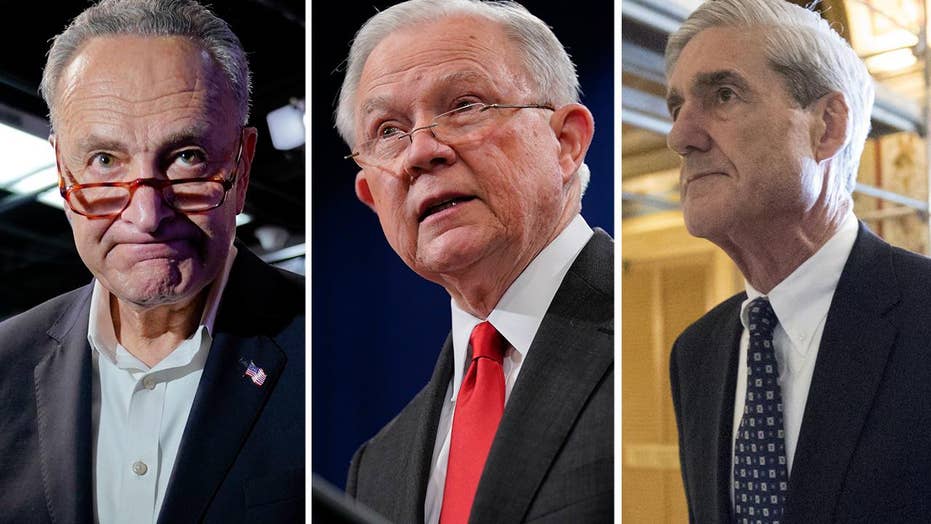 We think firing Mueller would be a grievous mistake – bad for the country and bad for the president.

President Trump has ample reason to complain about the conduct of Mueller’s 18-month-old investigation. But bringing the Russia investigation to an abrupt halt and firing Mueller would be unwise for both political and legal reasons.

Instead of putting an end to accusations that Trump and his campaign worked with Russia to put Trump in the Oval Office, ending the Mueller probe before it is completed would only strengthen public suspicions that the president has something to hide and has engaged in illegal conduct.

The president has frequently stated that he has nothing to hide and has done nothing wrong. He has repeatedly stated that “there was no collusion” between his campaign and Russia and that he committed “no obstruction” of justice by interfering with the Mueller investigation.

President Trump has called the Mueller probe a “witch hunt” examining a “Russia hoax” that was manufactured by the Hillary Clinton presidential campaign, promoted by the Obama administration (including U.S. intelligence agencies and the Justice Department), and incessantly repeated and hyped by what the president calls the left-wing anti-Trump “fake news media.”

If the president fires Mueller, Democrats in Congress and their media allies would seize on the firing to turn the special counsel into a martyr in the cause of what they would call “the rule of law.” And if Mueller sought to challenge his removal in court, the question of whether Trump had acted illegally could drag on for many years.

Instead of putting an end to accusations that Trump and his campaign worked with Russia to put Trump in the Oval Office, ending the Mueller probe before it is completed would only strengthen public suspicions that the president has something to hide and has engaged in illegal conduct.

To make matters even worse, President Trump’s appointment Wednesday of Matthew Whitaker to become acting attorney general has only strengthened the suspicions of Trump critics that the president wants the head of the Justice Department to act like his personal defense lawyer – protecting him from investigations – instead of the nation’s chief law enforcement officer.

Whitaker has been a loyal Trump defender in cable TV news appearances and other media interviews. He has harshly criticized the Mueller investigation and advocated for strict limits on what the probe should be allowed to investigate.

For his political loyalty, Whitaker was rewarded with the post of chief of staff to Sessions in the Justice Department, where according to news reports he served as the eyes and ears for Trump, monitoring Sessions’ activities on behalf of the president.

But the position of chief of staff does not require Senate confirmation. This has raised serious questions about whether President Trump had the legal authority to make Whitaker acting attorney general.

The Appointments Clause of the Constitution requires all principal officers of the government to be confirmed by the Senate. So the Constitution itself may prohibit Whitaker from serving, even temporarily, as attorney general.

Still, Trump and whoever becomes his a Senate-confirmed attorney general can reasonably demand that Mueller’s investigation focus on the central charge of collusion with Russia and should come to a conclusion in reasonably short order.

Mueller brought no credit on himself and his inquiry by loading up his “dream team” of lawyers and investigators with Democratic partisans and others implacably hostile to Trump. These included the likes of former FBI official Peter Strzok, who was himself deeply engaged in pre-election shenanigans hostile to Trump’s election.

After Attorney General Sessions recused himself from any involvement in the Mueller investigation (as a foreign policy adviser to the Trump campaign, he could well be a witness), Deputy Attorney General Rod Rosenstein gave Mueller a broad grant of investigative authority.

Mueller appears to have used that authority, with Rosenstein’s acquiescence or approval, to extend his probe far afield from the central issue of possible Trump campaign-Russia collusion. But despite Mueller’s efforts and the feverish inquiries of the media, nothing of substance has emerged to support any charge of a conspiracy between President Trump and Russian officials to violate federal election or criminal laws.

The indictments that the Mueller investigation has obtained have involved figures and charges of marginal-to-no relevance to Trump’s 2016 campaign activities.

For example, while Mueller’s team successfully convicted former Trump Campaign Chairman Paul Manafort on criminal charges, the charges only covered Manafort’s sordid political and financial activities before he came to work for Trump.

No wonder that a pre-election CNN poll showed that two-thirds of the American public wanted the Mueller investigation over by the midterm elections that were held Tuesday.

Wisdom, nevertheless, counsels further patience by the president at this point. President Trump and a new attorney general should permit the Mueller investigation to die a natural death. Nothing would so quickly revive suspicions that Trump had something to hide than an abrupt decision to fire Mueller.

The liberal media echo chamber would resound noisily with claims that Mueller had been “closing in” at the point at which President Trump fired him, that key witnesses were about to flip, that Trump had shown contempt for “the rule of law,” and so on.

House Democrats have already signaled that they will invite Mueller to testify before the congressional committees they will soon control. In other words, they have guaranteed a media circus.

The White House should also consider Mueller’s possible responses to his firing. If Whitaker fires him, Mueller might argue that Whitaker was improperly appointed in violation of the Constitution’s Appointments Clause, invalidating the firing.

Mueller might also seek to challenge his removal on legal grounds, arguing that under the Justice Department regulations controlling his tenure of office, insufficient cause had been given for his removal.

Although these regulations cannot constrain the president’s constitutional authority to fire federal law enforcement officials such as Mueller, the litigation would be protracted. Any setback for the president would be portrayed as convincing evidence of Trump’s “lawlessness.”

In short, nothing would so clearly ensure that the ghost of the Mueller investigation would haunt the next two years than a decision to fire him now.

Or imagine if Mueller were to retaliate by cooperating more closely with a presidential impeachment investigation conducted by the incoming Democratic House majority.

In addition, Mueller could simply release his report on the Russia investigation to the media, which would surely post it on websites around the world and give it enormous amounts of news coverage for weeks. Once the report became public, the White House and Justice Department would have no way to suppress it.

Suppose Mueller did the same with his investigatory files. He might need permission from Justice Department officials to do so, but once released there is no taking them back.

House Democrats might even transfer the Mueller team wholesale as the new staff of their impeachment inquiry.

The new attorney general could demand that Mueller either show that he has the goods to indict key figures in the Trump campaign or wrap up the investigation and report his findings within, say, two months. Furthermore, the attorney general could also insist that Mueller keep his focus on the charge of collusion with Russia that provided the original impetus to the investigation.

Mueller’s appointment initially pursued a critical question: whether the covert intervention of an unfriendly foreign power, acting in concert with a candidate, had tainted the presidential election. Mueller’s core task was to answer that question, not look into the course of Donald Trump’s business dealings over several decades and his associates’ financial misadventures.

There is a middle path here between simply firing Mueller and allowing him to pursue an open-ended investigation indefinitely. It is to require him to report, in a timely manner, on the integrity of the last presidential election. The country needs to know that much – but nothing more.

John C. Yoo is Heller professor law at UC Berkeley School of Law, a visiting fellow at the American Enterprise Institute and a visiting scholar at The Hoover Institution,