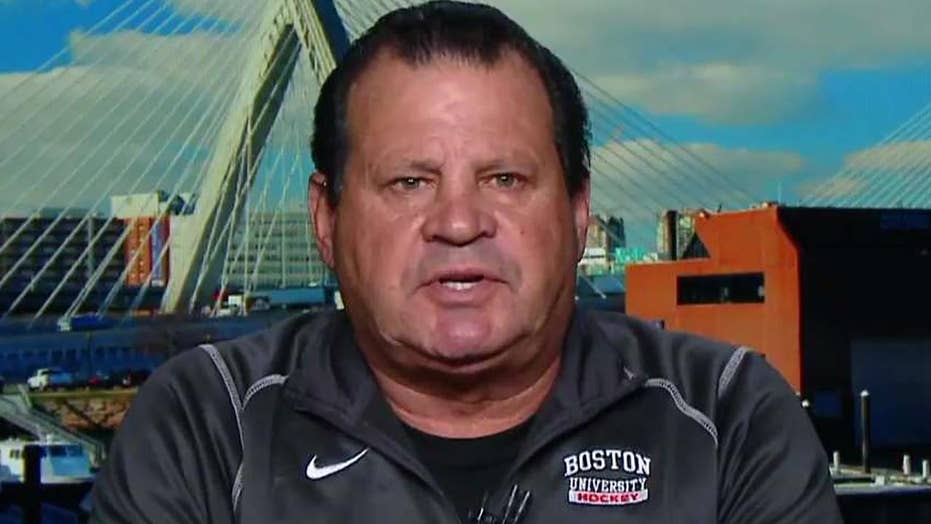 'Miracle on Ice' hero Mike Eruzione on politics at Olympics

Captain of the 1980 U.S. hockey team on how politics impact the Olympics.

It is known as the “Miracle on Ice.”

Say those three words, millions of people across the country know exactly what you’re referring to: Feb. 22, 1980, when the U.S. Olympic hockey team shocked what was then the greatest hockey team in the world, the Soviet Union, at the Winter Games in Lake Placid.

I was fortunate to be part of it and privileged to be the team’s captain. I was 25 at the time, and it’s been a huge part of my life ever since. We defeated the Soviets, won the gold medal and captured the country’s imagination. Sports Illustrated named it the greatest sports moment of the 20th century.

To me, though, the most surprising thing isn’t that we won. We had a masterful coach, Herb Brooks, who had honed us and prepared us and put us in precisely the right mindset to pull off a stunning upset. And we were better players than people realized. I believed we had a chance when we took the ice that night, amid deafening chants of "USA! USA!"

No, what’s surprising to me is that the game, that moment in time, still resonates with millions of Americans today, 40 years later. I am amazed that it still fascinates people, whether they’re hockey fans or not. Wherever I go, people in airports and hotels, golf courses and restaurants, want to shake my hand and say thank you. I get letters and emails each week from boys who weren't even alive in 1980. But they have heard about the Miracle on Ice from their fathers, mothers, brothers or sisters, or they've seen the movie "Miracle," and they're captivated by it.

For a lot of people who were alive in 1980, the game has become one of those moments in life, like the Kennedy assassination or 9/11, where they remember exactly where they were, who they were with, and what they were doing when it happened. The nice thing is that while most other events like that are tragedies, the hockey game makes them smile.

I don’t usually spend much time analyzing why things happen and what they mean, but I have considered why our victory over the Soviets and winning the gold medal has endured in the American imagination. Certainly, the sheer magnitude of the upset is part of it. That Soviet team had embarrassed a team of NHL all-stars. They had won four gold medals in a row, and hadn’t lost a single Olympic hockey game in 12 years when they arrived at Lake Placid. But a team of college players and two amateur minor-leaguers – I was one of them – beat them.

It was the middle of the Cold War, and the country wasn't feeling very good. The economy was hurting, we had unemployment and inflation, Americans hostages were being held in Iran, and the Soviets had invaded Afghanistan. Winning the gold medal didn’t change any of that. But people felt better. The hockey game made them feel proud to be Americans.

Part of it is also who the 20 players on the team were then, and still are today. We were hard-hat, working-class kids who could have been anybody’s neighbor or cousin or classmate. We weren’t superstars or pro athletes with million-dollar contracts. We were ordinary guys. People watching at home on TV could relate to us. People saw themselves in us.

The idea of overcoming long odds and doing something impossible is a story Americans love. This is the country that built the Panama Canal and put a man on the moon. I’m not saying the hockey game is in any way in the same category as those historic achievements. But it reflects the same can-do spirit that is part of the American identity.

More than anything, we were truly a team. We did not win because of the play of one or a few individuals. Every one of the 20 players on the team made crucial plays along the way that helped us succeed. As Coach Brooks used to say, we didn’t have enough talent to win on talent alone. We won the gold medal because of the bond the 20 of us shared. It was our respect for each other and our belief in each other that turned a young team of college players and amateurs into Olympic champions.

In the closing moments of the Soviet game on Feb. 22, 1980, the great sportscaster Al Michaels gave us the famous line, “Do you believe in miracles?”