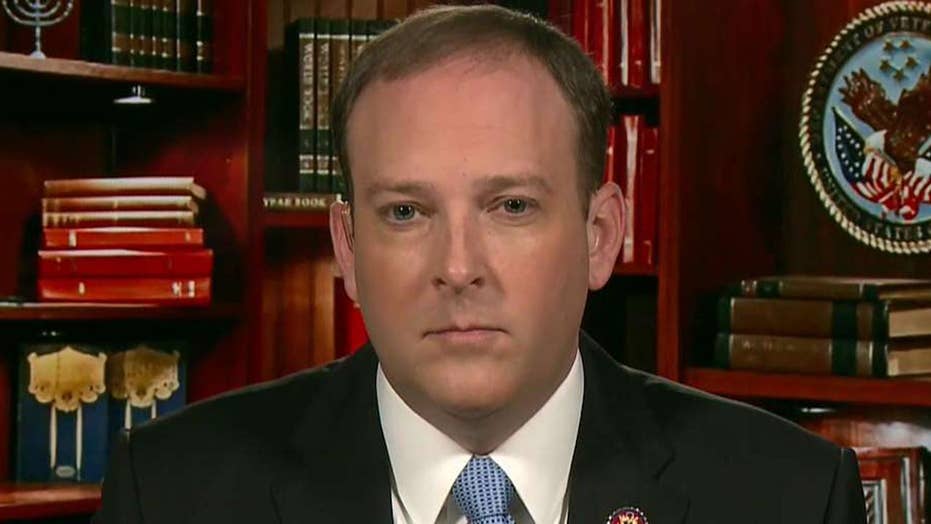 Republican Rep. Lee Zeldin weighs in on the news of the day on 'America's Newsroom.'

Secretary of State Mike Pompeo accused members of the Obama administration of undermining President Trump’s maximum pressure campaign on Iran by telling the Iranians to “just hang on” until Trump loses in 2020.

“I'll be straight up with you,” Pompeo says in an interview for the American Enterprise Institute’s national security podcast “What The Hell Is Going On?,” which I co-anchor with my colleague Dany Pletka, “you have folks who served in the previous administration who are telling the Iranian leaders today, ‘Just hang on. President Trump will lose in the election in November and we'll go back to appeasement. America will write you a big check, we'll underwrite your terror campaign around the world, we'll give you a clear pathway to a nuclear weapon system. Just wait until the Trump administration is finished.’”

This is outrageous. When President Trump came to office, Iran was on the march across the Middle East, its expansionism fueled by cash it received from the Obama nuclear deal.

DEFENSE SECRETARY ESPER: 'IT'S TIME THAT IRAN STARTED ACTING LIKE A NORMAL COUNTRY'

As a result of Trump’s decision to pull out of the deal and impose the most crippling sanctions ever on Tehran, Iran’s economy is contracting, inflation is spiraling and the regime has been forced to cut funding for its terrorist proxies.

LISTEN TO THE "WHAT THE HELL IS GOING ON?" PODCAST

“Hezbollah has fewer dollars today. The Iraqi Shia militias have fewer dollars today. The Iranian regime is having to make choices in their defense budget for 2020. The world hasn't actually seen them yet, they're coming. If you're an Iranian deciding to participate in the Iranian military, you should be prepared to take a pay cut.” Pompeo says.  And now the Iranian people are engaged in the largest popular uprising since the 1979 revolution.

The Trump administration is succeeding in its efforts to destabilize the regime in Tehran. For Obama officials to actively undermine those efforts is disgraceful.

The Trump administration is succeeding in its efforts to destabilize the regime in Tehran. For Obama officials to actively undermine those efforts is disgraceful.

The secretary of state also added that in the wake of Iran’s aggression in the Persian Gulf, the Trump administration has taken a number of steps to increase deterrence in the region.

“We have increased activity in the Strait of Hormuz. We have announced forced posture changes in the kingdom of Saudi Arabia. There are a handful of things that we have done that I know the Iranians understand have increased risks should they decide that they want to act out again and put American lives, American assets or those of our friends and partners in the region at risk.”

Unfortunately, our deterrence posture is not working as well as our sanctions.  The Iranians are getting away with increasingly bold attacks on the U.S. and its interests.

First, they attacked Japanese and Norwegian oil tankers; then, they shot down an unmanned U.S. drone; then they attacked Saudi oil facilities; then attacked a U.S. military base and killing a U.S. citizen and injuring four American service members; and now they have escalated again, deploying a mob to overrun our embassy in Baghdad, which is sovereign U.S. territory. The U.S. needs to impose serious costs on Iran for those actions, or they will continue to escalate.

Asked if other regimes under sanction might also wait out the 2020 elections to see if Trump loses, Pompeo said “this issue that you described is pretty acute with respect to the counter-Iran campaign because the previous administration and in fact many Democrats have a radically different vision of how we ought to treat Iran. It's not the case in many other places.”

In a wide-ranging interview, Pompeo also discussed the administration’s national security priorities for 2020 including North Korea, China, Syria, Afghanistan and what he considers the number one foreign policy accomplishment for which President Trump does not get sufficient credit.  You can listen to the full interview here.