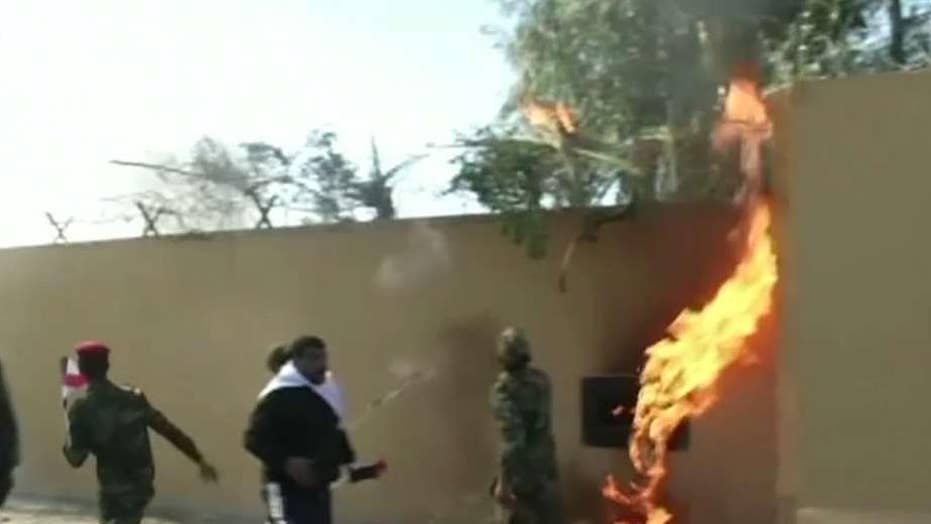 Marines being sent to US Embassy in Baghdad amid protests

Iraqi protesters storm US Embassy; Trey Yingst has the latest.

Once again, a U.S. embassy has come under an attack orchestrated by Iranian terrorists – but this time it is our embassy in Baghdad in Iraq rather than in the Iranian capital of Tehran as in 1979, when Iranian revolutionaries captured the U.S. Embassy and held 52 American hostage for 444 days.

We must maintain control of our embassy in Baghdad. A U.S. official told Fox News that 100 Marines are being sent to the embassy to increase security.

US PRESSES IRAQ TO PROTECT AMERICAN PERSONNEL AFTER EMBASSY ATTACK: ‘THERE WILL BE NO BENGHAZIS’

President Trump is wisely standing firm, tweeting Tuesday to explain the American airstrikes and to deliver a sharp warning to the governments of both Iran and Iraq: “Iran killed an American contractor, wounding many,” the president tweeted. “We strongly responded, and always will. Now Iran is orchestrating an attack on the U.S. Embassy in Iraq. They will be held fully responsible. In addition, we expect Iraq to use its forces to protect the Embassy, and so notified!”

The president’s tweet is a welcome display of U.S. resolve, but more than a tweet is needed to show Iran it cannot attack the U.S. embassy with impunity. It’s time for an American military response.

Both President Trump and Secretary of State Mike Pompeo have said the U.S. will consider attacks by Iran’s proxies as if they came from Iran directly and respond accordingly. Now Iran has upped the ante and attacked the United States directly at our embassy in Iraq.

It would be entirely justified for U.S. forces to now make another larger set of strikes against the Iranian militias in Iraq, especially those with large numbers of Iranian Revolutionary Guards Corps officers and equipment. They are the active menace and must be brought under control if Iraq is ever to be free of Iranian meddling.

But a better way to show Iran that we consider the embassy attack a massive miscalculation would be to destroy much of the Iranian Navy. This would simultaneously remove Iran as a major threat to shipping in the region and would serve as a warning that we mean it when we say we hold the regime in Tehran responsible for the acts of its puppets.

Former U.S. Army intelligence officer Michael Pregent, now a senior fellow at the Hudson Institute, recently created a map of Iranian targets the U.S. could hit if military action becomes necessary. He told the Jerusalem Post the U.S. could hurt Iran without sending troops into the country.

Diliman Abdulkader, head of American Friends of Kurdistan, notes the one constant friend we have had in Iraq and the region is the Kurds and we should stand more closely with them against Iran.

We must ensure that the Islamic Republic of Iran does not prevail in its quest for power and does not turn neighboring Iraq into a vassal state.

The protests in Iraq were started by Iraqi nationalists over corruption and Iranian influence. But now the mullahs who rule Iran have unleashed all the proxy forces they built in Iraq to fight ISIS and are using the forces to crush Iraqi patriots and exert control. This has been brewing since President Barack Obama decided to cut and run from Iraq after our victory there 10 years ago.

Obama’s premature withdrawal left a vacuum in Iraq that was filled by Iran and ISIS. Inevitably, we had to return and destroy the evil ISIS caliphate, but in doing so we allowed Iran to build and consolidate power over many militias that now are openly attacking us.

Our devil’s bargain to use these militias as the shock troops in our counter-ISIS fight was another bad decision favoring Iran that was made by the Obama team in its misguided belief Iran could be a partner for peace.

The forces attacking the U.S. Embassy in Baghdad Tuesday did note hide their affiliation with Iran. They have even said that Qassem Soleimani, head of Iran’s Quds Force, is their leader.

Iran is reeling from U.S. maximum pressure sanctions and has been facing a wave of protests at home over the economic misery the sanctions are causing the Iranian people. The Iranians cannot afford to lose the influence they have over their neighbors in Iraq.

Angry at the Trump administration for backing out of the deeply flawed nuclear deal and restoring economic sanctions on their country, the Iranian leaders are determined to cause as much trouble in their region as they can in hopes of pressuring President Trump to ease sanctions. Part of that pressure is seeking to turn Iraq from an American ally into an Iranian one.

That is why the U.S. cannot allow the Iranians to survive as influencers in Iraq, let alone potentially consolidate control, displace any American influence and become de facto puppet masters there. The Iranians have shown they are pressing on to the finish and if we back out now, they will emerge as the force dominating the region.

The U.S. attack on the Iranian-backed Kataib Hezbollah in Iraq and Syria was a necessary first step to show that we will not allow Iranian proxies to attack our interests and forces without a cost. Keep in mind there were Iranian Revolutionary Guard Corps officers killed in these attacks as they directed the operations of this group on behalf of the Iranian regime.

It is tempting to say we should wash our hands of the mess in Iraq and Iran and bring all our troops home and focus on domestic challenges. But that is a path to a nuclear-armed Iran dominating the region.

We have avoided years of Iranian provocations. While war is not our desire, weakness now invites a large and costly war later. We must show the brutal Iranian regime and all the people in the region and the world, the U.S. is the strong horse. That is the only path to lasting peace.