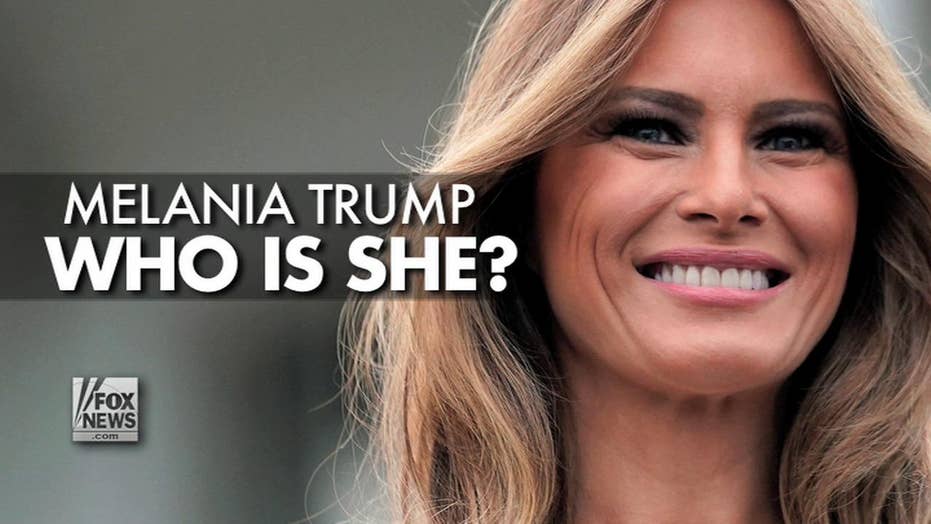 Melania Trump: A look at the first lady

I was watching a late-night show mock Melania Trump. Which show? I can’t remember, so many of them do it.

I’ve been a bit surprised at all the gags.  Generally, the first lady is off limits, unless she gets directly involved in politics, like Hillary Clinton did.

But then, this is comedy, and these shows aim so much at President Trump that there’s bound to be collateral damage to those around him. At least respectable media sources know enough to leave her alone.

Eight years ago, when Barack Obama was our new president, the press treated his wife Michelle with something close to a sense of wonder.

Melania Trump wears a black Dolce &amp; Gabbana dress prior to a group photo during the spouse and partner program at the Royal Palace of Laeken, near Brussels on May 25, 2017. (AP)

In the March 16, 2009, issue of The New Yorker, they wrote about her contribution to White House fashion:

“[H]er legacy may well be to show women how to move gracefully from the insecurities of youth into a sophisticated and stylish maturity. [...] Michelle Obama reminds women that they can make a place for vanity in their lives, and that, when they do, a little fashion can be supremely empowering.”

On the other hand, Melania, who was an actual fashion model, got this snide comment in the March 1 issue of The New Yorker:

“[T]he very last thing Melania aspired to be was First Lady. If she makes it seem to be an unenviable role, that is understandable, though to an outside observer it hardly seems worse than being Mrs. Donald Trump.”

Not that her fashion sense has gone unnoticed.  In an April piece from The New York Times entitled “Rocky Start for a Brand,” they note Melania has “a look that calls to mind a militarized version of 1950s womanhood, one that favors tightly belted coat dresses instead of housedresses, with the passive-aggressive role playing that implies.”

At the same time in 2009, the “paper of record” was lauding Michele Obama’s volunteer work in a piece called “First Lady’s 100th Day is One of Service.”

And the fashion comments continue.

In 2009, Vanity Fair put Michelle (and Barack, too) on their International Best-Dressed List.  As they breathlessly noted, “The Washington, D.C., and Chicago-based First Lady of the United States Michelle Obama, 45, describes her personal style as colorful and practical with simple silhouettes. “

Melania’s coverage in Vanity Fair has been somewhat different.  This year’s May issue featured “Inside The Trump Marriage: Melania’s Burden.” As they describe it:

“Until November 8, Melania Trump's marriage provided her with a golden Fifth Avenue fortress, at a price--putting up with her husband's humiliations and boorishness. From Melania's ill-fated campaign appearances to her apparent reluctance to embrace the role of First Lady: how a very private woman is coping with the intense public scrutiny of her marriage.”

Though it offers surface sympathy, it’s by and large a hit piece.

In fact, these days it seems hardly a week goes by without someone, somewhere, in the press doing a questionable piece on Melania.  The latest Newsweek has an article that’s ambivalent at best regarding her (and the Trump women’s) preference for high heels.

The title notes the heels are “a symbol of everything that is beautiful and horrifying” about the first lady.  It goes on to state heels are not currently in fashion, though the Trump women are “rare political mountain goats” who are “normalizing the footwear of the beauty pageant.”

(Try finding an ambivalent piece from an equivalent source about Michelle Obama’s fashion choices, then or now.  Reporting on the ESPY Awards last month, the Huffington Post notes “Michelle Obama’s black ESPYS dress is instantly iconic” and “this look is absolutely jaw-dropping.”)

It’s clear the people who write these things don’t like Donald Trump. That’s fine, have at him. He's the president of the United States, after all.

But do they really need to bring Melania into it? She didn’t run for office, and she’s not presently serving.

The wife of a politician may suffer at how her spouse is attacked, but the press should have the sense of proportion to leave her out of it.