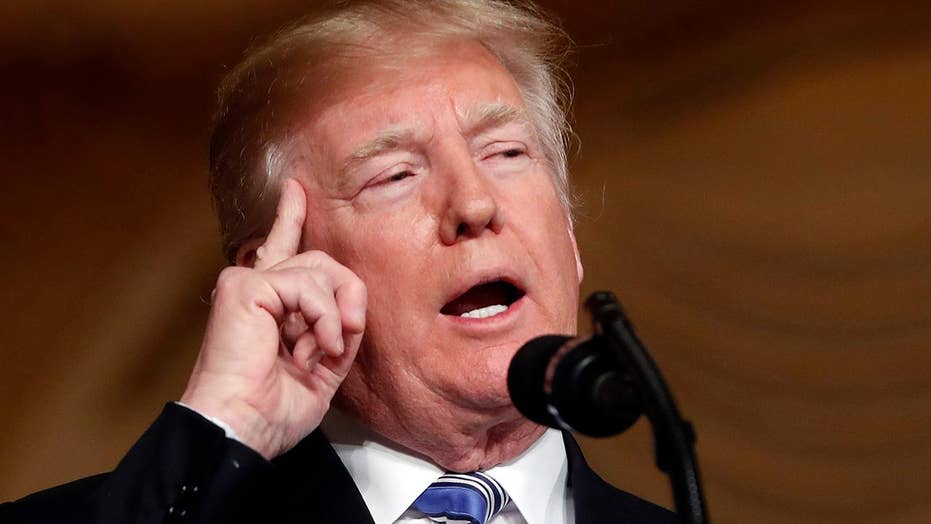 Trump: We want to put Mueller investigation behind us

President Trump calls the investigation into possible collusion with Russia a 'hoax' during joint press conference with the Japanese prime minister.

The media war against President Trump continues without stop. Every hour of every day, somewhere a major media outlet is attacking the president. It might be with a news show. It might be on an entertainment program. It might even be a Pulitzer Prize-winning hip hop album that was chosen because it bashes Trump.

The American media are still angry they didn’t get to pick the president in 2016 and are doing their best to overturn the decision of voters.

This past week, in the midst of the media’s Comet Comey, there was still time for news outlets to bash Trump – whether it was CNN fixated on fired FBI Director James Comey’s prostitute allegations or journalists obsessed with President Trump’s use of the term “Mission Accomplished” for the U.S. strike against Syria.

The host for the White House Correspondents’ Dinner, Michelle Wolf, even mocked how Trump eats and dared him to attend the dinner. “Yeah! I dare you, you poor little man! I’ll give you $5 if you come,” the “Daily Show” writer said mockingly.

The media were just getting warmed up. Three separate dramas had plots where the president was removed from office. “Homeland,” “The Good Fight” and “Designated Survivor” all envisioned replacing their commander-in-chief. “Madam Secretary,” modeled after Hillary Clinton, went that route in January. Three of the four have preferred the popular liberal fantasy of the 25th Amendment solution.

In “Homeland,” the Cabinet moves against the president because of the “unprecedented” firing of a third of the Cabinet. (Sound like a hint?) “The Good Fight” actually made up a whole bunch of outlandish lies about President Trump, some of which it even admitted to, including that he “colluded with the Russians.”

One character summed up much of the media attack on the president in the real world, as she crafted an entirely fictional series of charges. “This isn’t about truth anymore. And it’s not about lying. It’s about who’s backtracking and who’s attacking,” she ranted.

“Saturday Night Live” even employed Robert De Niro in a skit where he played Special Counsel Robert Mueller. De Niro went on “Today” to fantasize about upcoming appearances. “I hope there’s a couple where I interrogate him, then I arrest him, and then I escort him to jail,” he chuckled.

That takes things to the Pulitzer Prizes: The Anti-Trump Edition. The awards included one for both The Washington Post and New York Times for trying to tie Trump to Russia. The Post also got one for helping Democrats win the Alabama U.S. Senate race.

But the special, “thumb in the eye of Trump,” came with a win for hip hop artist Kendrick Lamar. Here’s Sirius XM radio host Clay Cane celebrating how Lamar’s album “Damn” won. “In ‘The Heart Part 4,’ a pre-album track from ‘Damn,’ Lamar wrote, ‘Donald Trump is a chump, know how we feel, punk / Tell 'em that God comin' / And Russia need a replay button, y'all up to something."

The album, wrote Cane for CNN, “is a punch in the gut, a wake-up call to people who are in intellectual comas.” That’s 2018, where Pulitzers are decided because the media ridiculously, immaturely and irrationally hates Trump.

2. Cuba’s Castro Convertible Leadership: What do you call a Cuba without the Castro dictatorship? Not much different. Sure, the names change, but the socialist tyranny is the same.

Unless you are the leftie news media. News outlets around the world ran with the bogus story claiming Miguel Mario Diaz-Canel Bermudez was “elected” the new president of Cuba. Other outlets referred to the “election.” Only Diaz-Canel ran unopposed in a typical Cuban farce. Just like the murderous Castros before him.

The Associated Press, that bastion of journalistic integrity, ran a story that the Washington Post headlined: “Miguel Diaz-Canel elected president of Cuba.” The Independent ran an identical headline with a lot more text.

NPR, paid for in part by your tax dollars, actually contradicted itself in one paragraph. It led with how Díaz-Canel “has been elected president of Cuba, officially ending the Castro family's decades of domination of the country's highest office.” Then it added how the event “might better be described as a coronation than an election.” And, of course, Raul Castro is still going to lead the nation’s Communist Party and it’s military.

Not exactly stepping down.

The Chicago Tribune deserves high marks for being more accurate. It ran the headline, “Miguel Diaz-Canel selected as next president of Cuba.”

3. Making Book on Politics: The real problem with media bias isn’t just bad news stories. It’s that you often need to find better stories to offset the original and cross-reference them. Here’s a great example.

The problem with that is that The Times has a ridiculously skewed list and conservatives have complained about it for years. That point gets no acknowledgement at all from Stelter. All he admits is that “there is a caveat about The Times list: Psychologist Jordan Peterson's book ‘12 Rules For Life’ has been a hot seller for months, and might have ranked No. 1, but because it is published by a Canadian company, it is not counted by the U.S. newspaper.”

Hardly the only caveat. Let’s turn to National Review and author Dennis Prager who wrote: “The Times Best-Seller List: Another Reason Americans Don’t Trust the Media.” Prager made a strong argument. “As a writer (who, for the record, had a previous book on that list), I have long known it isn’t a best-seller list.” His most recent book, “The Rational Bible: Exodus,” “opened up on Amazon as the second-best-selling book in America.” He looked to see if it was on the Times list. It wasn’t.

This argument wasn’t new. Even NPR knew about it back in September. “Conservative book publisher Regnery has announced that it will no longer use the New York Times best-seller list in its promotional materials. Regnery says it is biased,” it explained.

This all blew up on Wednesday, when the New York Times was confronted about its bias during a shareholders meeting. The Times even got into a Twitter war with Prager, because that’s the kind of thing a neutral outlet does with a best-selling author.

4. The Rap on Social Security: Just as death and taxes go together, so do Social Security and … Cardi B? The 25-year-old rapper made news this week not just for what she said, but for who agreed with her. Cardi, as the music industry calls her, sang the praises of President Franklin Delano RooWedsevelt during a recent GQ interview. “He's the real 'Make America Great Again,' because if it wasn't for him, old people wouldn't even get Social Security," she said.

Former presidential candidate Bernie Sanders put the media into overdrive by commenting on the interview. “Cardi B is right. If we are really going to make America great we need to strengthen Social Security so that seniors are able to retire with the dignity they deserve.”

Billboard headlined its piece: “Bernie Sanders Quotes Noted Economist on Strengthening Social Security: 'Cardi B is Right.'” That article even went on to talk about Cardi’s political future. “Boom. Cardi said it. Sorry Kanye, but Cardi 2020?” Because 2020 has to be even more moronic than 2018. (Thanks to her age, that silliness has to wait until at least 2028.)

Other media outlets followed – CNN, Yahoo, The Hill – pretty much every outlet looking for clicks involving a pop star and an aging socialist. Any way the news media can hype a liberal narrative, they do it. Even something as stupid as this.

Thankfully, there’s always liberal Salon to push an even more liberal narrative. It wrote: “Bernie Sanders may sing Cardi B’s praises – but sex workers say he’s no ally.” Yes Cardi, “a former stripper,” suddenly was caught up in a new battle. Because news can always get more insipid. Always.