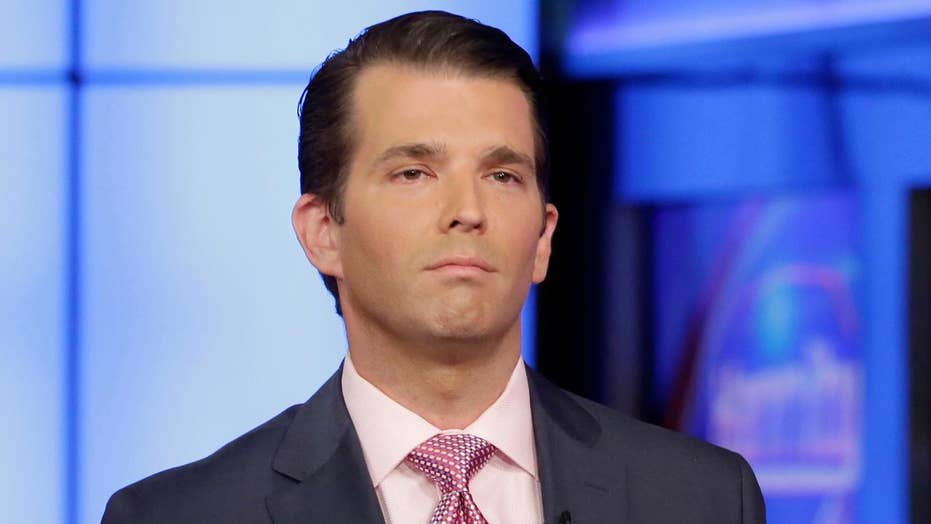 Reaction on 'The Ingraham Angle' to media's handling of the Russia story.

The media went nuts when President Trump announced Wednesday that the U.S. recognizes Jerusalem as Israel’s capital and will begin the process of relocating the American embassy there.

This freak-out came despite the fact that Congress overwhelmingly passed bipartisan legislation in 1995 stating that “the United States Embassy in Israel should be established in Jerusalem no later than May 31, 1999.” And in June this year the Senate voted  90-0 to approve a resolution stating that “Jerusalem should remain the undivided capital of Israel.”

On top of that, candidate Trump promised many times during his presidential campaign that he would do exactly what he announced Wednesday.

The media were eager to blame President Trump when violent protests broke out following his announcement on Jerusalem, instead of blaming the Palestinians who were carrying out the violence.

CBS Correspondent Seth Doane warned of violence on a global scale: “There are concerns about violence not only here and across the Middle East, but this also could provide rationale for terrorist attacks in the West as well.”

ABC described it as President Trump “reversing nearly seven decades of U.S. policy.” The network paid no heed to the law Congress passed 22 years ago making it U.S. policy to recognize Jerusalem as Israel’s capital.

NBC’s Chief Foreign Correspondent Richard Engel was especially apocalyptic. “I think a lot of countries are going to look at this and say the president took a dangerous foreign policy decision that has real world consequences, could – can cost lives for domestic reasons,” he told the MSNBC crowd. He also called it “profoundly unsettling.”

The pundits were even worse. MSNBC’s Chris Matthews warned, “By the way, deaths are coming now because of this.”

Actor Mark Ruffalo (“The Incredible Hulk”) showed the silliness of the Hollywood approach to foreign policy. He tweeted this gem, urging Israel not to respond to Palestinian violence and blaming Israel: “Isreal (sic), please show restraint in the face of these protests. This is a terrible blow to any hope for peace or a life beyond apartheid for your neighbors. Please, all parties, use restraint.”

2. This Is CNN: Things are always bad for a news outlet when your entire story blows up in your face because of sloppy reporting. Worse, when a competitor points it out to you. Here’s the CNN headline: “Exclusive: Email shows effort to give Trump campaign WikiLeaks documents.”

Conservatives descended on CNN online, mocking the error. Twitchy, which does a great job of monitoring Twitter, tore into the network, saying: “FAKE NEWS fail! Another CNN Trump ‘bombshell’ explodes in their faces.”

Nearly five hours after the incorrect story was posted, CNN’s PR department corrected the record. “CNN's initial reporting of the date on an email sent to members of the Trump campaign about Wikileaks documents, which was confirmed by two sources to CNN, was incorrect,” the news channel said in a tweet.

However, CNN’s “Reliable Sources” host Brian Stelter made it plain the reporters won’t be punished. “A CNN spokeswoman says there will not be disciplinary action in this case because, unlike with Brian Ross/ABC, @MKRaju followed the editorial standards process. Multiple sources provided him with incorrect info,” Stelter  tweeted.

Essentially, their faulty processes let it happen so CNN’s OK with that.

The Daily Caller’s Amber Athey gave a detailed look at how much CNN had promoted the fake news story. “From 8 am ET to 1:30 pm ET, CNN spent close to a full hour on the story, gave it five breaking news banners, and brought on over a dozen guests to discuss the implications of the email sent to Trump Jr. The network led with the story on their 9 am, 10 am, and 11 am shows,” she explained. .

CNN wasn’t alone in the fiasco. CBS did it too, just with far less vigor.

3. Franken Resigns, Maybe: Sen. Al Franken, D-Minn.,  threw himself on the altar of political expediency and announced he’s resigning – eventually. The move was to put further pressure on the GOP in the Alabama Senate race and comes after repeated allegations of groping by the comedian-turned-senator. It also gives him the option to change his mind if he doesn’t like the results of the Alabama Senate election.

But Franken is a popular liberal who many in the media grew up watching. So he had some defenders and the resignation was, naturally, used by journalists exactly as Democrats wanted, as a club against Republicans.

CNN host Michael Smerconish even became a groping truther and said he was “not convinced” Franken had actually groped KABC Radio host Leeann Tweeden. His defense? “There are shadows behind his fingers.”

MSNBC anchor Andrea Mitchell even lamented that “there does seem to be a rush to judgment in this case.” Apparently, MSNBC staff have not been briefed on the many allegations against Franken or this awful photo.

“Morning Joe” Co-Host Mika Brzezinski chimed in with the strangest response to Franken’s resignation: “This does not feel right.”

On MSNBC, Chris Matthews was a veritable quote machine. The “thrill up my leg” guy outdid himself, noting  that “the worst you can say about Democrats is they’re too pure.” He wasn’t as kind to the GOP. “The new Republican age of consent is 14,” if candidate Roy Moore wins in Alabama, Matthews said.

And the Washington Post noted how Franken took the “No apology” route and even listed all of his eight accusers.

4. They Love Me, They Love Me Not: MSNBC cut ties with contributor Sam Seder over a 2009 tweet about director Roman Polanski, who fled the U.S. in 1978 after pleading guilty to having unlawful sex with a 13-year-old girl.

Seder’s tweet was alarming: “Don’t care re Polanski, but I hope if my daughter is ever raped it is by an older truly talented man w/a great sense of mise en scene.”

MSNBC responded by letting Seder go. But that’s not where the story ended. The tweet was found and promoted by far-right’s Mike Cernovich and that helped Seder rally support against the firing. Then MSNBC changed its mind.

Here’s how The Washington Post described the switcheroo: “On Thursday, the saga took another sharp turn: MSNBC reversed itself and hired back the lefty guy, Sam Seder, whom it had dismissed earlier in the week amid a pressure campaign from conservative conspiracy theorist and gadfly Mike Cernovich.”

That wasn’t the only weird MSNBC move this week. The network gave a complete pass to host Joy Reid for her anti-gay comments from 2007-2009. The attacks were mostly on former Florida Gov. Charlie Crist, with Reid even referring to him as “Miss Charlie.” Reid apologized and said her comments were “insensitive, tone-deaf and dumb.”

That attitude doesn’t seem to apply to conservatives. Former CNN conservative Jeffrey Lord was canned for his sarcastic use of Twitter and saying “Sieg Heil!” to his critics, who he said was being fascist. CNN didn’t care when conservatives supported him.

5. Harassment Hits Keep Happening: Columbia Journalism Review tried to dig through the issue of sexual misconduct in journalism. It sent out a survey to 149 different news organizations and only one-third even opened it – including outlets like PBS, MSNBC, NBC, the New York Times and Huff Post. Not one of 149 outlets responded.

The roll call of media names linked to allegations of sexual misconduct also continued to grow. Here are a few highlights/lowlights:

Dylan Howard, “the top editor for the National Enquirer, Us Weekly and other major gossip publications,” “described his sexual partners in the newsroom, discussed female employees’ sex lives and forced women to watch or listen to pornographic material,” according to AP.

Netflix dropped actor Danny Masterson from “The Ranch” “amid multiple sexual assault allegations,” reported CNBC. “X-Men” director Bryan Singer is being sued for allegedly raping a 17-year-old boy back in 2003.

And MSNBC has benched former Rep. Harold Ford Jr. while it investigates allegations against him.

Hurray For Hollywood: Tinseltown outdid itself this week, led by foul-mouthed loon Chelsea Handler. She referred to White House Press Secretary Sarah Huckabee Sanders as a “whore” and “that harlot that they are dressing up and trolloping out every day.”

And the dull return of “Will and Grace” tried desperately to shock viewers in its “Gay Olde Christmas” episode by calling Santa, “just another old white perv we once trusted.” Ho, ho, ho.

The anti-Trumpism keeps coming from Hollywood. ABC is giving Trump impersonator Alec Baldwin his own talk show, so I bet that will be neutral. Katniss is growing older but not wiser as the “Hunger Games” star Jennifer Lawrence said if she ever met Trump it “ends with a martini to the face.”