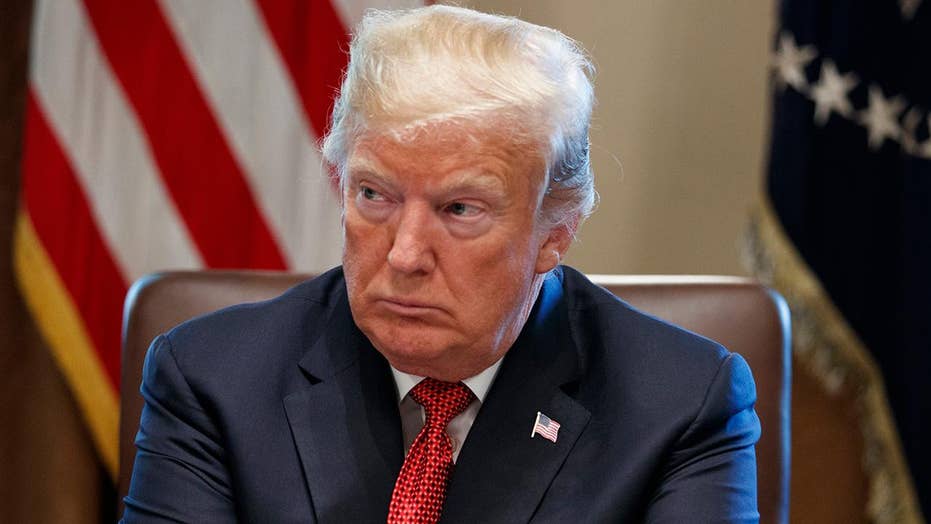 President Trump is attacked by media on a multitude of topics.

The liberal media is once again whipping itself into a frenzy over President Trump; reaction and analysis on 'The Five.'

The midterm elections are just over two weeks away, so what better time for the anti-Trump media to bash the president and Republicans? Even better, journalists then blamed the strategy on … Republicans.

In the view of many in the media, everything the GOP and President Trump do is cause for attack.

NBC News Political Director Chuck Todd slammed Republicans for deploying “a heavy dose of a bit of fear-mongering, conspiracy theories and even some mob-style antics.”

That was the common media narrative, with both resistance networks MSNBC and CNN delivering similar stories. Those networks delivered the goods from two guys named Chris.

CNN’s Chris Cuomo bashed the GOP for promoting “fear and loathing.” The term “scare tactics” was plastered on the TV screen as he spoke.

Cuomo – son of a former Democratic governor of New York and brother of the state’s current Democratic governor – was particularly incensed because the right used the term “mob” to describe the left and was also upset because President Trump was intent on stopping the massive migrant caravan trying to get to the U.S. border.

Much of the coverage was just usual network fare of near constant attacks on President Trump.

Then NBC followed that up with a decidedly un-#MeToo segment on how a rapper created a video with a Melania Trump look-alike doing a striptease. The story pitted the first lady against the rapper. There were no women’s groups interviewed to back up Mrs. Trump.

Earlier in the week, Brzezinski had called Trump "base, animalistic and disgusting."

In another segment, Scarborough called supporters of the president, “quislings” or traitors. He ranted at one point, “I am ashamed, ashamed, ashamed." Apparently, he feels for his viewers.

New York Magazine art critic Jerry Saltz painted with a broad brush and attacked President Trump for hanging a painting that depicts him and all the other Republican presidents.

Saltz mocked how Trump’s “hands are teeny” in the painting and said that even the style was something “Stalin used a lot of.” He added that “this particular painting represents, that kind of old, very white male America.”

Notice how racial mockery has become the liberal media’s stock in trade.

CNN was its usual self. It ran a piece headlined: “The 45 most bizarre lines from Donald Trump's wild Montana speech.”

CNN’s Chris Cuomo bashed the GOP for promoting “fear and loathing.” The term “scare tactics” was plastered on the TV screen as he spoke.

And “Daily Show” host Trevor Noah showed where the left’s thinking is with an epic comparison. “So, wow, cancer is Donald Trump,’ he said at the “F--- Cancer” gala.

Let’s just say their vision is impaired but, boy, are they able to look left.

Journalists have their eyes on Texas Democratic U.S. Senate candidate Beto O’Rourke for both 2018 and 2020. Their hope is that he can beat GOP Sen. Ted Cruz this year and then Trump in the presidential race. Cruz’s lead in the polls has them panicking.

On “Morning Joe,” the fear took over with Mika Brzezinski proclaiming that all is not well. “Beto O'Rourke could lose by 10 points!” she wailed.

Chuck Todd described O’Rourke as the “Bobby Kennedy of millennials.” O’Rourke continues his role as the male Wendy Davis – a liberal the press desperately wants to see turn Texas blue.

“Andrea Mitchell Reports” guest host Peter Alexander on MSNBC was supportive of “rock star” O’Rourke either way. “A lot of people think this guy's name, if he wins, they think he's the nominee. If he loses, he may be the Democratic nominee,” he proclaimed.

CNN didn’t even ask the candidate about his reported lies involving leaving the scene of a drunk-driving accident many years ago.

“You care deeply about this country. I know you do. That's why you're out campaigning,” O’Donnell told Biden. Notice the lack of question in there.

Fellow co-host and Democratic donor/“journalist” Gayle King rolled out the red carpet for fellow Dem and former San Antonio Mayor Julian Castro. She described him as someone “who’s considered a rising star in the Democratic Party.” She actually welcomed him to the table, saying, “Hello, rising star.”

Last, but not least, the media are freaking out that Hillary Clinton might not be finished with politics. A member of The New York Times editorial board knocked her for “moral arrogance” about sexual misconduct allegations against her husband, former President Bill Clinton, and noted she “remains broadly unpopular.” The Daily Beast ran a piece headlined “Dear God, Hillary Clinton. Please, Just Go.”

3. DNA verdict: There was one more likely 2020 presidential candidate who got a lot of news coverage this past week. It didn’t go well for either her or the press.

Warren was so damaged by this campaign that she had herself tested and the results were more like a Native American twig somewhere in her genealogical tree. Perhaps “dating back 6 to 10 generations.”

It was a disaster. The Cherokee Nation criticized Warren for “undermining tribal interests.” Of course, the left took Warren’s side.

MSNBC political analyst and SiriusXM Director of Progressive Programming Zerlina Maxwell called the response “ridiculous.” Maxwell, who says she is also Cherokee, tried to shift the topic away from Warren to who qualifies as a member of the tribe.

Slate wondered if other politicians would be pushed to release their genetic data.

The broadcast networks actually had to cover the story and Warren came out looking bad.

The Washington Post’s Dana Milbank was a big exception, declaring Warren “unfit to lead.” He also brought up her contribution to a cookbook called “Pow Wow Chow: A Collection of Recipes from Families of the Five Civilized Tribes.”

According to Milbank, “it lists five recipes, three of which were apparently cribbed from the New York Times and Better Homes and Gardens.”