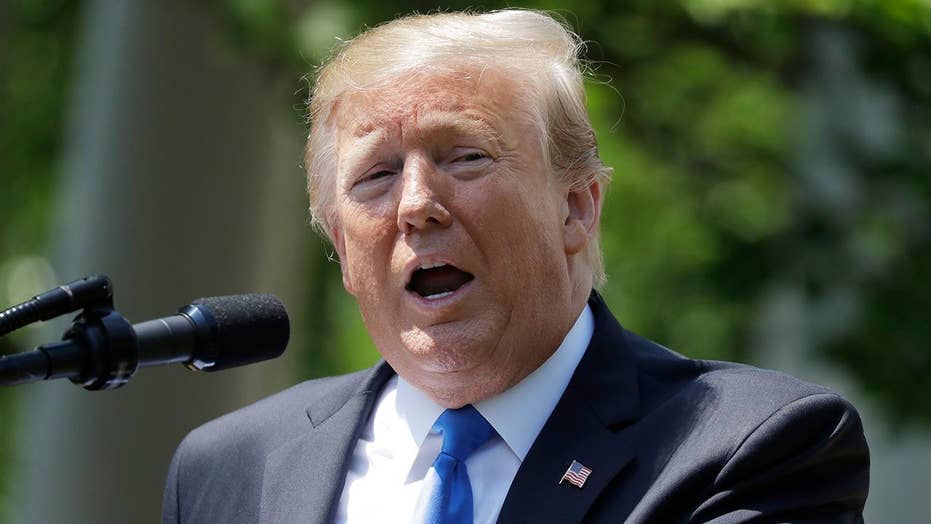 Donald Trump’s call to Vladimir Putin last Friday was a request for a lifeline at the end of one the worst weeks since he entered the White House. It came as he faces a new week that could be even worse – all of which is threatening the president’s ability to stay in the White House in 2020.

Of course, the Mueller Report doesn’t address collusion because there’s no such crime. However, it documents 251 contacts between the Trump campaign and Russia as well as details of Moscow’s interference in the election. Furthermore, and most concerning to most Americans, Trump again refused to tell Putin not to interfere in the 2020 election. Why? Well, it’s clear Trump needs Putin’s help again if he’s going to stay in the White House in 2020.

MICHAEL COHEN SET TO HEAD TO MINIMUM-SECURITY PRISON ON MONDAY

Last week was yet another example of just how much help Trump is going to need. When Attorney General William Barr testified under oath before the Senate Judiciary Committee, the country saw firsthand the dissembling, semantical hair-splitting, and filibustering by the country’s chief law enforcement official, who ultimately was shown to have lied in previous testimony.

Barr also refused to answer questions when faced with lying under oath before Congress – which is a felony – or unleashing yet another scandal. The most stunning example was Barr’s refusal to answer Sen. Kamala Harris’, D-Calif., question, “Has the president or anyone at the White House ever asked or suggested that you open an investigation of anyone?” Barr stalled as he pondered the meaning of the word “suggest” and calculated whether to tell the truth or reveal yet another scandal added to a long list of behavior usually reserved for petty dictatorships, not democracies. Lie again and face more felony charges, or not answer the question leaving everyone to believe he’s lying?

Barr’s non-denial denial led Senator Harris to request the Department of Justice Inspector General to investigate Barr. Speaker Nancy Pelosi, the next day, stated Barr lied to Congress. Of course, lying to Congress is one of the reasons former Trump lawyer Michael Cohen is going to jail.

Barr’s testimony before the Senate Judiciary Committee led to his refusal to testify the next day before the House Judiciary Committee. He also refused to provide an unredacted copy of the Mueller Report, which he received 45 days ago. Meanwhile, it is reported that Mueller is negotiating with the House Judiciary Committee to testify about the investigation. Barr has refused to provide a date when Mueller could testify so Mueller is taking matters into his own hands so he can provide the truth about the investigation under oath. When Mueller testifies it will be a very bad day indeed for Trump, Barr, and many others.

Trump’s call to Putin on Friday makes clear he needs help from Russia again to stay in the White House in 2020, just as he did in 2016. Low poll numbers even with low unemployment reinforces his weak political position.

The Mueller Report, Trump’s conduct with Putin and Russia, as well as Barr’s defense of it, is taking a political toll. A series of polls show Trump’s favorability mired in the low 40s while another poll shows that five Democratic candidates for president are today poised to beat him with a sixth only one point behind. Yet another poll shows Trump in a dead heat with four Democratic candidates in…Texas.

Perhaps that’s why over the last two weeks Trump has tweeted criticism of Joe Biden and Elizabeth Warren, telegraphing that he doesn’t want to run against them. In another tweet, Trump stated the race is rigged against Bernie Sanders, a “tell” that he would welcome running against him. Trump’s tweets are replays of the 2016 playbook letting everyone know the help Trump is seeking not only from Republicans but also from Russia.

Trump even tried to work with Democrats last week, meeting with Speaker Nancy Pelosi and Senate Minority Leader Chuck Schumer on…wait for it…infrastructure. Pelosi proposed a $1.5 trillion infrastructure package that Trump increased to $2 trillion that was immediately accepted by the Democratic leaders. Yet, Trump’s victory was short-lived as his own chief of staff, Mick Mulvaney, undercut it saying the price tag was too high. The Freedom Caucus joined him, too.

But, wait there’s more. As bad as last week was for Trump, this week is shaping up to be a doozy.

For starters, Michael Cohen reports to federal prison. Cohen, Trump’s personal lawyer and fixer for over a decade, is going to prison for lying to Congress, violating campaign finance laws, and financial crimes.

Monday is also the deadline for Treasury Secretary Steve Mnuchin to provide six years of Trump’s taxes to the Ways and Means committee after ignoring the first deadline. Trump is pulling out all the stops to stop the release of his taxes. But, failing to provide them could mean Mnuchin will be subpoenaed and held in contempt of Congress if he fails to comply, along with fines and jail if he continues not to provide them.

Monday is also the day Barr must respond to House Judiciary Committee Chairman Jerry Nadler, D-N.Y., about providing the unredacted Mueller Report and underlying evidence as well as a date to appear before the Judiciary Committee or be held in contempt of Congress. Don McGahn, Trump’s former White House counsel, is also scheduled to turn over documents to the same committee this week as well schedule his appearance to testify before them. There is a series of other deadlines as well that have been postponed by Trump’s legal challenges to stop Deutsche Bank and his accountants from turning over his financial records to Congress that include portions of his federal tax returns.

That’s just this week. And it’s only going to get worse for Trump.

So that’s why Trump’s call to Putin on Friday makes clear he needs help from Russia again to stay in the White House in 2020, just as he did in 2016. Low poll numbers even with low unemployment reinforce his weak political position. Resorting to denigrating the Mueller Report (not only its findings but also that of his own intelligence agencies), and admitting that he didn’t warn Putin not to interfere in our 2020 election (despite his own Director of the FBI, Christopher Wray, stating that Russia is gearing up for it), paints a picture of desperation for Trump. All that and more shows why Trump wants, and needs, Putin’s help in the 2020 election.