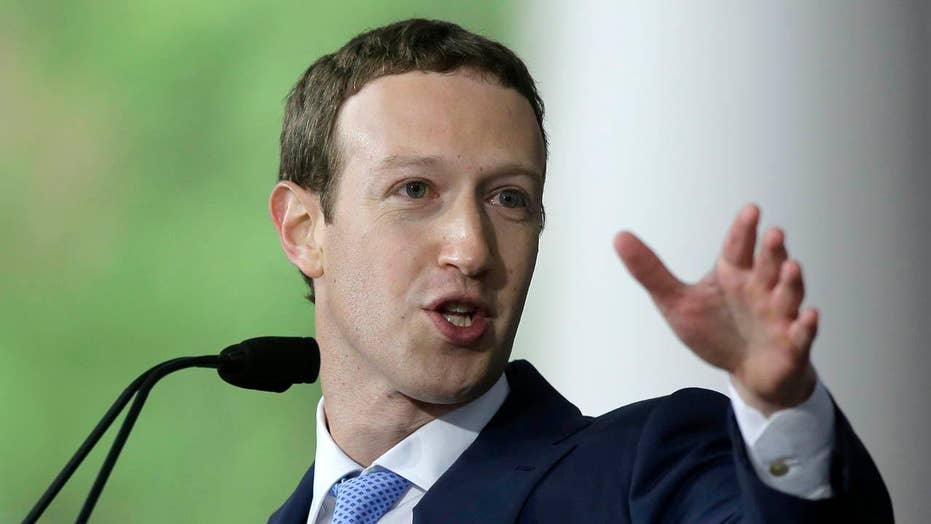 Why is Mark Zuckerberg getting political?

The Facebook founder has been visiting political battlegrounds; Peter Doocy has the story for 'Special Report'

For any liberal to entertain winning the Democratic nomination for president these days, there are some important boxes to be checked, including taking on America’s system of law and order. Now Facebook CEO Mark Zuckerberg has begun checking the boxes.

Zuckerberg has hired Hillary Clinton’s pollster. He’s hired Barack Obama’s campaign manager. He’s even visited the first presidential caucus state of Iowa. And he’s pandering to the left’s machine by funding a campaign that aims to get rid of our nation’s bail system.

In the dangerous push to end our current bail system, liberals like Zuckerberg are arguing that people across America are being wrongly held in jail because they can’t afford to post bail. This is ridiculous. Our bail system is in place to keep law-abiding Americans safe and to ensure that a person accused of a crime actually appears in court so justice is served.

States that have attempted to pass bail reform policies are seeing the failures of unsecured release up close. Harris County in Texas is fighting a federal lawsuit claiming its bail schedule is unconstitutional and that it keeps poor people in jail.

According to Harris County data since the order took effect, 32 percent of defendants released on unsecured bond have failed to appear for court, compared to only 4 percent released on a surety bond. Failures to appear cause havoc and long delays in the criminal justice system. Justice cannot be served if the accused does not appear for court.

Examples of such releases are occurring in other jurisdictions around the country. A New Jersey theater employee was arrested after law enforcement officers found a bullet-proof vest, grenade, guns and ammunition in his vehicle, causing the theater to be evacuated. He was determined not to be a danger to the community and released on unsecured bond under the new law.

New Jersey’s liberal bail reforms caused one state legislator to send a letter to the speaker of the state Assembly in California regarding a similar bill circulating in his state. The letter states that “dangerous and career criminals are released daily within hours of arrest” with no accountability. He urged the California Legislature not to make the same mistake.

While everyone is innocent until proven guilty, judges are right to set bail for individuals who are charged with a crime. Too many are simply being sent back into the poorest neighborhoods, which proponents of bail reform like Zuckerberg don’t live in.

These released individuals, many of whom are repeat offenders, walk out of jail and continue to victimize the very people proponents of bail reform claim to protect – the poor and indigent.

Unsecured release methods and the use of flawed risk assessment tools are coming under fire every day. The Arnold Foundation, which developed a risk assessment tool being used by several jurisdictions such as New Jersey, is a defendant in a federal lawsuit seeking damages in a wrongful death case.

A career criminal, who had been arrested on felony gun charges days earlier, was released on unsecured means using the Arnold Foundation’s risk assessment tool and then allegedly committed murder.

Elitists like Zuckerberg try to make the argument that the bail system is unfair to poor people, but fail to understand that law-abiding citizens regardless of income level expect laws to be enforced that will keep them safe.

There is nothing safe about the bail reforms currently being implemented and under consideration. Liberals roll out examples of people being held for minor and non-violent crimes who are forced to be away from their families because they couldn’t afford monetary bail. Some such examples do exist.

What is Zuckerberg’s answer to these headlines?  Like so many other items on the left’s wish list, bail bond reform might sound good at first. However, in the real world where the rest of us live, there are plenty of concerns for tens of millions of Americans who wish to raise their families in a safe society.

Americans expect that when people are accused of stealing, selling illegal drugs, abusing others, driving drunk and otherwise breaking the law, they will appear in court. If convicted, such individuals will be punished for their crimes so that justice will be served.

As the bail bond reform debate continues and Mark Zuckerberg continues his multimillion-dollar quest to boost his standing with the far left’s power structure, I hope most Americans can understand that when it comes to thinking about reforming our bail system, it’s better to be safe than sorry.