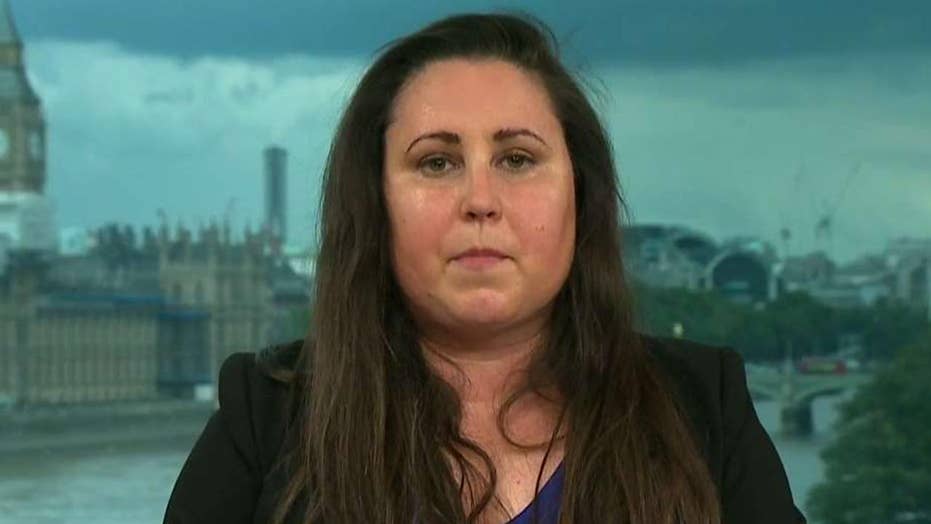 I was on the London Underground train struck by a terrorist bomb during rush hour Friday morning, but fortunately I was not among the injured.

When the explosive device went off the train immediately stopped and the doors opened. We were instructed to evacuate quickly and calmly. Police and emergency services were nothing short of remarkable. They instantaneously sprung into action.

In this image made from video, fire raises at a southwest London subway station in London Friday, Sept. 15, 2017. London's Metropolitan Police and ambulance services are confirming they are at the scene of "an incident" at the Parsons Green subway station in the southwest of the capital. The underground operator said services have been cut along the line. (@RRIGS via AP) (AP)

My immediate reaction was to assume incorrectly that we were being evacuated due to a false alert or an Islamic extremist gunman. Chatting with other passengers, they seemed to reach a similar conclusion.

The attack happened at 8:20 a.m. local time on the district line train that carries Londoners from the west side into the city for work. The train cars were packed with commuters heading in to work and children heading to school.

This is an image made from video showing burning items in underground train at the scene of an explosion in London Friday, Sept. 15, 2017. A reported explosion at a train station sent commuters stampeding in panic, injuring several people at the height of London's morning rush hour, and police said they were investigating it as a terrorist attack. (Sylvain Pennec via AP) (AP)

Parsons Green, the scene of the attack, is a beautiful part of London that has more of village feel and the tube station sits on a beautiful park area. Picture a very leafy and tranquil refuge from the hustle and bustle of a busy city with friendly local pubs and upscale beautiful homes. It always seemed like one of the London neighborhoods that would be safe and apart from the fray.

Ironically, I’m in town covering the world’s largest military defense show. Delegations from militaries have been meeting and shopping for the latest advances to help fight ISIS and other threats.

I was on the train heading to see the latest innovations that could make a big difference to defense and homeland security when the attack happened.

What’s next for London? Data is still emerging. But here are my initial thoughts.

It is possible that this is not an Islamic terrorist event and when folks jump to conclusions it is irresponsible and reckless. We need to find out more.

In terms of tracking down the perpetrators, it is reasonable to expect that the bomber or bombers departed the train one or two stops earlier.

Why do I think that? Because there seems to have been a timer on the bomb. And based on previous cases that are not suicide bombings, terrorists tend to leave a very short period of time between leaving a device and the time to detonation.

An injured woman is assisted by a police officer close to Parsons Green station in west London after an explosion on a packed London Underground train, Friday, Sept. 15, 2017. London's Metropolitan Police says a fire on the London subway has been declared a "terrorist incident." (Dominic Lipinski/PA via AP) (AP)

This makes sense because the terrorists don’t want the bomb they left behind to be discovered and defused. They want mass casualties and as much death as they can unleash.

London is one of the most surveilled cities in the world. Closed-circuit TV cameras are everywhere – including on transport. If the search for video of the bomber or bombers is limited to a handful of stations, then teams can rapidly review the footage and have a very good chance of identifying the perpetrators quickly.

As of yet, police haven’t provided any images. They may decide not to do so for operational reasons, but if they do then there is no doubt Londoners will step up and help out.

An injured woman is led away after an incident at Parsons Green underground station in London, Britain, September 15, 2017. REUTERS/Luke MacGregor - RC1F274B6C70 (REUTERS)

The perpetrator or perpetrators will be identified. And they will be captured. Make no mistake about that. The caliber of people who work counterterrorism and policing in Britain is outstanding. At every single attack in the past, they have worked tirelessly and around the clock to get results and bring terrorists to justice.

Since the bomb did not seem to fully detonate, there will hopefully be a treasure trove of forensic evidence. There may even be DNA from the bomber or bombers, which would be fantastic for the purposes of prosecuting them.

An ongoing concern is that if there could be further strikes if Friday’s blast was prompted by Islamic extremism. Law enforcement will be working very hard to identify the perpetrators and then map out their connections and ascertain if they could be part of a larger network with a plan for future attacks.

I grew up in London and was in the city for most of the terrorist attacks the city has experienced in recent years, including the last attack on London transport. One of my most vivid memories was when suicide bombers attacked three trains on the London Underground on July 7, 2005, killing 52 people and injuring over 700.

On that terrible day I saw people streaming through the streets. Much of the transport system had come to standstill. But Londoners determinedly carried on and walked – some for hours – to still get to work. And then they walked home. They refused to let their lives be disrupted.

You can expect much the same from Londoners in the next few days. Vigilant and cautious, but refusing to let anyone make them live in fear.