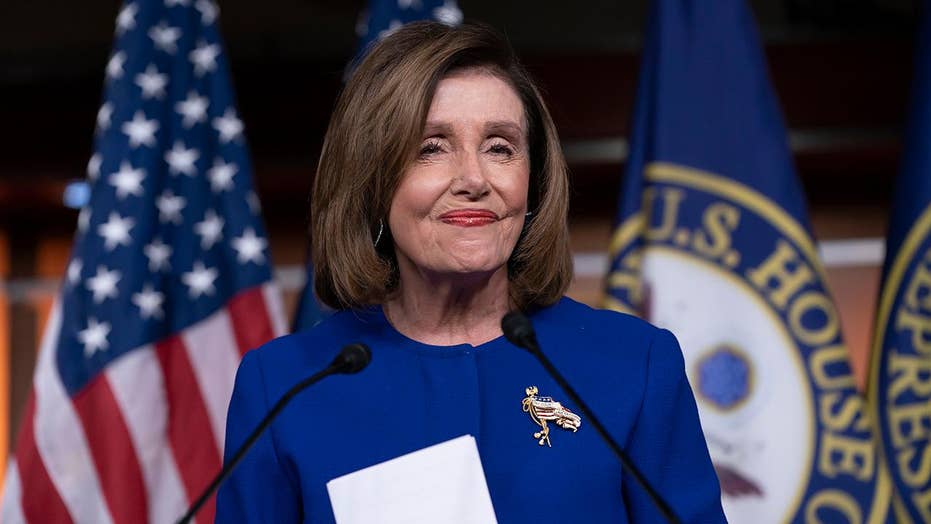 What did Nancy Pelosi gain by withholding articles of impeachment from the Senate?

Nancy Pelosi’s latest political stunt could prove to be her most divisive yet – not pitting Republicans against Democrats as her impeachment drive has done -- but dividing her own party instead.

Kevin McCarthy suggested to Fox News’ Maria Bartiromo recently that House Speaker Pelosi was perhaps holding up delivering the articles of impeachment to the Senate in order to help out Joe Biden.

The House minority leader’s theory is that by delaying the start of the Senate trial, Pelosi will effectively bench two of Biden’s most formidable rivals – Bernie Sanders and Elizabeth Warren – during the run-up to the Iowa caucuses on Feb. 3 and the New Hampshire primary that follows on Feb. 11. That could give the former VP a much-needed boost.

McCarthy is either onto something, or he has cleverly launched a political hand grenade in the midst of the Democratic primary. The very hint that Dem officials, including Pelosi, might put their thumb on the scale to disadvantage Sanders (or Warren) would be enough to launch all-out mutiny among Bernie’s army. They are still livid that the Democratic National Committee in 2016 conspired to help Hillary Clinton; many repaid that villainy by sitting out the election and still others voted for Donald Trump.

McCarthy’s explanation of Pelosi’s bizarre stall tactic makes some sense. During the impeachment trial, Warren and Sanders will be locked up in the Senate. Consequently, Biden and small-town Indiana Mayor Pete Buttigieg, also a top-tier candidate, will face less competition as they make last-minute appeals to Iowa and New Hampshire voters.

Clear the decks and even Uncle Joe might achieve lift-off.

Currently, Biden trails in third place in Iowa and second in New Hampshire, but the polling among the four leaders is tight, and the outcome remains fluid. A recent CBS/YouGov poll shows less than one-third of the voters in both states are committed to their choice.

For Biden, placing well in those early two states is important. Next up are South Carolina and then Nevada; in both states, he commands an impressive lead over everyone else. But a flop in Iowa and New Hampshire could cause voters in those states to question Biden’s “electability,” which has long been his top selling point.

Why would Pelosi scheme to help Joe Biden? Because she understands the necessity of winning the Electoral College.

On the other hand, if Uncle Joe scores well in those early states, he will almost certainly win big in South Carolina and Nevada and will head into Super Tuesday on March 3 with credible momentum. The top states in that free-for-all are California, where Biden is roughly tied now with Sanders and Warren, and Texas, where Biden is ahead by a sizeable margin. Like dominos falling, those early victories could give Uncle Joe the nomination.

Why would Pelosi scheme to help Joe Biden? Because she understands the necessity of winning the Electoral College; she knows that to regain the Oval Office, Democrats need to recapture the middle-class Rust Belt voters that helped elect Trump in 2016. Polling shows Biden has a better chance of doing that than Sanders or Warren.

Despite some catastrophic goofs in the past year, Pelosi remains a canny pol. She gets that the country is not ready for the Green New Deal or on-demand abortion. She also might imagine that Biden, for all his verbal mayhem, is comforting to those rattled by Trump’s disruptive approach and rough language.

Many Establishment Democrats, including most likely Pelosi, back Biden as the safest choice. Like many of her colleagues, Pelosi really, really wants to beat Trump. It has become personal.

McCarthy’s theory makes sense of an otherwise senseless and increasingly unpopular maneuver by Pelosi. Holding up delivery of the articles of impeachment that were voted on in the House has won no concessions from Senate Majority Leader Mitch McConnell. It has only delayed the proceedings and caused many to wonder about the seriousness of the impeachment effort. As has been noted, Pelosi, Rep. Adam Schiff and others rushed the impeachment hearings along, not willing to pursue witnesses they say they now want to call, arguing all the while that removing the “dangerous” president was an “urgent” matter.

That the speaker then chose to sit on the articles for weeks pretty much obliterated that narrative. Even members of her own party have lost patience with her dithering. This is not Pelosi’s only recent blunder.

On the contrary, the House speaker has come under fire for putting House Intelligence Committee Chair Schiff in charge of the impeachment process.  Schiff is detested by Republicans for his role in hyping and lying about the “fake” Russia collusion narrative, and also for his deception about his office’s interactions with the whistleblower in the Ukraine case. Polling shows that the GOP successfully called out Schiff’s impeachment inquiry as unfair and partisan; as a result, the entire weeks-long drama scored no wins with voters.

Pelosi is scrambling to protect both herself and her party. If Democrats run a far-left candidate like Sanders or Warren, they could suffer a resounding defeat, akin to the losses of George McGovern in 1972 or Walter Mondale in 1980. Today, 75 percent of the U.S. self-identifies as “moderate” or “conservative” against only 21 percent that sees themselves as “liberal.” Americans are not ready for a progressive president.

Pelosi understands this and may want to push Biden across the finish line to give Dems their best shot. Delaying the articles of impeachment could do just that, though the risky tactic could also further divide the party. Supporters of Sanders and Warren will be incensed if they decide the trial delay was meant to crimp their candidates’ chances. That will not help Democrats come November.

In late 2018, New York Sen. Chuck Schumer tweeted, “We have tremendous unity in our caucus.”  That was untrue then, and it is even less true today.