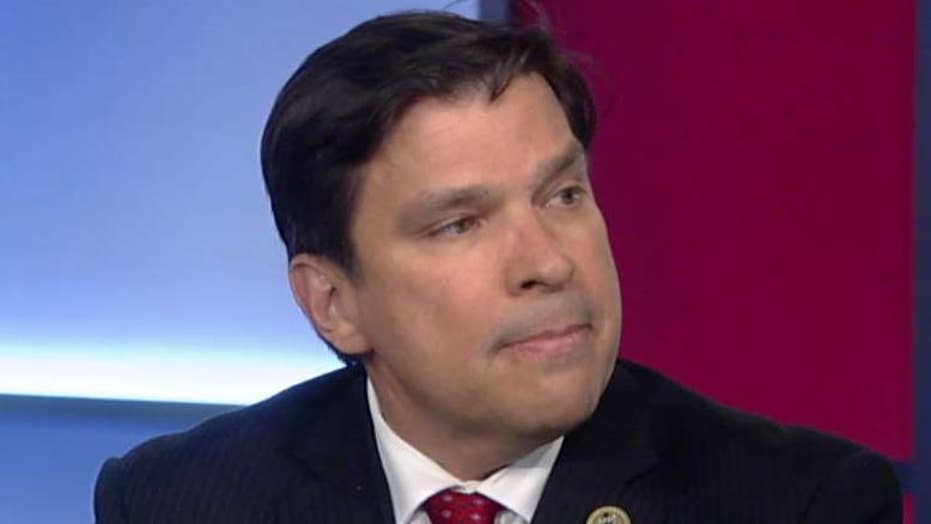 Rep. Vicente Gonzalez weighs in on the U.S. strategy towards Iran on ‘America’s News HQ.’

Iran killed an American contractor, then killed 176 innocents on an airplane. But the really horrifying thing is they killed more than 1,500 of their own citizens over the past months for the crime of protesting against the regime.

Despite that crackdown, they are out in force protesting again, showing the bravery of the Iranian people and offering proof they are not going to accept the ongoing corruption and oppression of the mullahs. They have seen the damage these fanatics have done to the world and to their own country and they’ve had enough.

The protesters got a tremendous boost when President Trump sent a tweet in Farsi supporting their cause, which rapidly became the most liked tweet in Farsi in the history of Twitter.

He followed that one up with a warning to the regime to stop its crimes against their own people, who are just standing up and asking for decent lives.

These two “tweets heard ‘round the world” may be the most consequential actions that platform has ever produced. By speaking directly to the Iranians and their oppressors Trump told them and the world we are watching and there will be consequences if the regime continues attacking its own people.

The United States has been steadfast in saying our policy is not regime change but to change the regime. We are rapidly approaching the last chance for the mullahs to do that. The U.S. is applying even more sanctions to a regime crippled financially and unable to operate much longer. The protesters are applying internal pressure that delegitimizes a regime with a massive credibility deficit already.

The targeted killing of Qassem Soleimani has emboldened regime opponents at home and throughout the region. There were already huge anti-Iran protests in Iraq that threaten the control Iran has gained there over the past decade. The Iraqis don’t like the corruption and as patriots don’t want to be a puppet of their neighbor.

The people protesting in the streets now see cracks in the previously invincible façade of the mullahs and their thugs.

In Syria, Vladimir Putin took advantage of the vacuum to call Syrian President Bashar Assad to the Russian airbase for a chat about who would pull his strings now that Soleimani was dead and Iran was receding. With the very real prospect of more U.S. strikes looming, Iranian Revolutionary Guard Corps units in Syria were seen packing their gear and getting out while the getting was still good. Iran has been able to leverage its proxies and infusions of cash to control Syria. Now that is all in limbo.

And the biggest effect from Soleimani’s long-overdue demise has been at home in Iran. He was the poster boy of the regime’s attempts at regional domination. He also served as the kingpin of the terror network of proxies that did the dirty work. He even helped with internal repression whenever needed.

Much of the media made a big deal of the crowds at his funeral without noting that many of those people were there against their will. There were celebrations across the region with pastries being shared in celebration. “Hours after the strike, video circulated online showing people celebrating in Soleimani's hometown of Kerman, Iran,” the Washington Examiner reported.

Is this a tipping point for Iranian influence and potentially the regime at home? It is certainly in dire straits and will be hard-pressed to maintain its proxies across the region. Soleimani was treacherous and evil, but he was an outstanding terror kingpin who got many groups to work together. That is gone and absent large infusions of money their willingness to do Iran’s heavy lifting will wane.

And the people protesting in the streets now see cracks in the previously invincible façade of the mullahs and their thugs. Soleimani was supposed to be 10 feet tall and bulletproof and it doesn’t matter how big a funeral they throw for him. The people know President Trump pushed one button and returned the general to his component molecules.

Iranians want the treasure and energy of a great country to go toward making their lives better, not supremacist adventures in other countries. Eggs and butter in Tehran trump guns and rockets in Syria. The protesters see corruption and incompetence and know there is a better way. The mullahs need to change their ways or the people will change them.

However it happens, a more peaceful and prosperous Iran would be better for everyone.