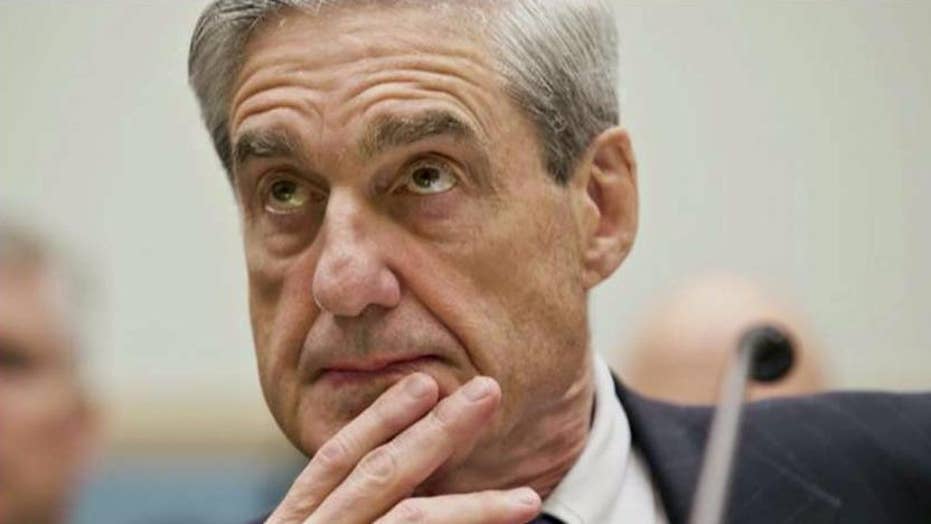 Where will Robert Mueller's investigation turn next?

Trump campaign aides charged in special counsel's probe into Russian meddling in the 2016 presidential election; reaction and analysis on 'The Five.'

Monday was not a good day for President Trump, but it was an even worse day for Hillary Clinton.

Indictments handed down by Special Counsel Robert Mueller charged Trump’s former campaign chair Paul Manafort and close associate Rick Gates with a slew of white collar crimes, including failure to register as a foreign agent, tax evasion and money laundering, an embarrassment to the president. But, some have described the indictments as weak, since they focus on Manafort making false FARA filings, or not registering as a foreign agent, a charge brought by the government only six times since 1966, and which resulted in only one conviction. Enforcement of the FARA law is generally not rigorous.

More important, there was no mention of Russia, or of collusion between the Trump campaign and Moscow. Hillary needs Mueller to connect those dots.

In Hillary’s world, she campaigned admirably and had the better message; it was Moscow that did her in.

Also released Monday was news that a Trump campaign volunteer, George Papadopoulos pled guilty Oct. 5 to lying to federal agents. Papadopoulos was brought aboard the campaign as an expert on Greece, but promoted various unsuccessful attempts to set up a meeting between Donald Trump and Putin. None of his efforts bore fruit; emails suggest he was rebuffed by senior members of the campaign on several occasions.

Nonetheless, his plea is viewed as potentially damaging to the Trump camp, since language in the indictment suggests he may have acted as a cooperating witness; in other words, he may have been persuaded in recent months to wear a wire. As someone pretty far down the food chain, it is unclear what information he might provide.

None of this will satisfy Secretary Clinton’s desire to blame Vladimir Putin for her astonishing loss to an untutored and underfinanced Donald Trump.

She has written extensively about the suspicious regard that Trump voiced for the Kremlin leader during the election, and of the numerous points of contact between members of the Trump entourage and suspected Russian operatives.

In Hillary’s world, she campaigned admirably and had the better message; it was Moscow that did her in.

That narrative took a hit in recent days as proof emerged that the Clinton campaign itself had indirectly paid Russian sources millions of dollars for salacious and discredited material on Donald Trump. The Clintonistas and the DNC hired Fusion GPS to assemble the notorious Trump dossier, which was created by former British spy Christopher Steele with the apparent help of Kremlin-linked informants.

It also came to light recently that the Obama White House was aware of a wide-ranging FBI investigation into Russian efforts to secure uranium reserves in the U.S., involving bribery and racketeering that took place during the early years of the Obama administration.

During the same period, Russian interests mysteriously donated millions to a Canadian affiliate of the Clinton Foundation, which Hillary failed to report, and a Moscow bank with ties to Putin also paid Bill Clinton half a million dollars for a speech. In 2010 she, along with the heads of other agencies represented on the CFIUS panel, green-lighted the sale of Uranium One to Russia's Atomic Energy Agency, Rosatom, against the recommendation of national security advisors.

Americans are left to wonder…was it Trump that colluded with Russia, or was it Hillary? Did Putin pick sides, or was he out mainly to destabilize our body politic? If it was the latter, he has succeeded beyond his wildest dreams.

The investigation into Russian meddling has become a political football, with Democrats using allegations of collusion to discredit Trump’s extraordinary win.  Chuck Schumer, Nancy Pelosi, Adam Schiff, Mark Warner – they are all-in on the Trump-Russia meme, and notably silent on the recent developments noted above.

Meanwhile, the tens of millions of Americans who voted for Donald Trump are angry that his victory has been met with steadfast resistance and obstruction.

Democrats (and some Republicans) have thrown up endless roadblocks, among other things delaying the staffing of vital government posts and hindering efforts to fix our collapsing health care system.

Trump supporters question the integrity of the FBI, which apparently also paid Fusion GPS, the impartiality of the Mueller investigation and have long since tuned out the biased liberal media.

None of this is good for our country. Which is why the sooner the Mueller investigation comes to an end the better. Despite all the sturm und drang about Russian collusion and the dire warnings of Trump incompetence or worse, Americans are the most upbeat they have been in decades, the stock market is soaring and the economy is showing every sign of accelerating.

This good news appalls Democrats, who still lack a coherent message that can compete with a strengthening economy. A rising tide tends to lift all boats and drown out the left’s politics of envy; what else do they have?

Hillary, in particular, has only excuses. She will continue to hope for proof positive that Donald Trump’s victory was not a victory for putting America first, for strengthening our military, for reestablishing the rule of law and tightening our borders, for rolling back regulations of businesses and making our tax code simpler and fairer. She needs Robert Mueller to prove Trump’s win illegitimate, and the handiwork of Russia.

Hillary and her fellow Democrats want the suffocating cloud of suspicion to linger, and, given the enormous resources that Mueller has assembled, they will probably get their wish.