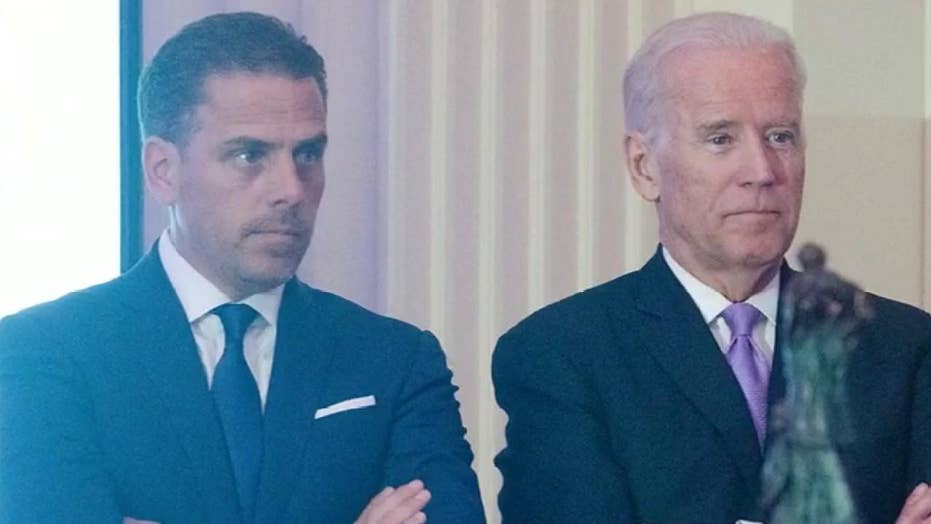 Trump defense team lays out their case against the Bidens

Republican Rep. Lee Zeldin, member of President Trump's impeachment team, weighs in and reacts to the latest on the fight over witnesses.

Former Vice President Joe Biden served for 36 years in the U.S. Senate – but he must be glad he’s not there today, because it gives him a big advantage over four senators he is running against for the Democratic presidential nomination.

The four senators are Bernie Sanders of Vermont, Elizabeth Warren of Massachusetts, Amy Klobuchar of Minnesota, and – trailing very far back in the polls – Michael Bennet of Colorado.

The senators are stuck in the Senate chamber for President Trump’s impeachment trial, while Biden – as well as former South Bend, Ind., Mayor Pete Buttigieg and the other Democratic presidential contenders – are free to campaign in Iowa for the caucuses that will take place there Monday, and in New Hampshire for the Feb. 11 primary there.

How long will the impeachment trial last? It depends on whether Democrats win their fight to be able to call witnesses. If the trial is opened to witnesses it could last weeks longer.

So why isn’t Biden surging in the polls in Iowa?

Here are a few reasons.

Biden enjoys strong support among African-American voters. But 91 percent of Iowa’s population is white – as is 94 percent of New Hampshire’s.

Buttigieg polls poorly among black voters, but in the first two nominating contests they aren’t much of a factor, which will play to his advantage.

Voting in a primary is like voting in the general election. You show up at your polling place, cast a secret ballot, and then leave. Unless there’s a long line, the process is quick and easy.

In caucuses, you show up at a designated site and discuss the candidates with your neighbors. There are 1,678 such sites in Iowa, including in schools, libraries and churches. Voters gather in groups in a big room to show support for individual candidates. Any candidates who fail to get at least 15 percent of the votes in the room are eliminated and their supporters have to pick one of the remaining candidates to support. The process can take as long as three hours.

As a result, voter turnout for the caucuses is typically low, and voters need to be strongly committed to devote a lot of time to the process. Some people can be persuaded to change their minds at the caucuses, and unlike primaries and elections, second-choice candidates matter.

Whoever wins the Iowa caucuses traditionally gets a boost in New Hampshire, which votes less than a week later.

Biden has been criticized for not spending enough time in Iowa, although he spent a lot of time there on his recent “No Malarkey” tour. His Senate rivals hit the campaign trail last Saturday after the impeachment trial adjourned until Monday. Sanders spent just under 32 hours in Iowa but made seven stops and covered more than 330 miles. Thousands of people turned out to see him.

The president’s attorneys and his Republican defenders in Congress are also attacking the Bidens.

Will these attacks affect Democratic voters in Iowa? And if so, how?

Biden argues that the attacks show Trump is afraid of running against him, because the former vice president would be the strongest Democratic candidate. That argument could gain him more support in Iowa.

On the other hand, if Democratic voters in Iowa believe the accusations against the Bidens have some validity and would weaken Joe Biden in a race against Trump, they might support other candidates.

Finally, keep in mind, a candidate doesn’t need to win in Iowa to win the Democratic or Republican presidential nomination. Candidate Trump lost the Iowa caucuses to Sen. Ted Cruz of Texas in 2016.

Since 1972, caucus winners from both parties have become the nominee in the general election over half the time. But only three caucus winners went all the way to the White House.

If Biden wins Iowa or manages a strong showing he could still maintain his lead nationally. His strong support among minority voters could bring him multiple victories in South Carolina Feb. 29 and on Super Tuesday March 3, when 14 states – including delegate-rich California and Texas – hold nominating contests.

But if Biden finishes third or fourth in Iowa he might drop out of the presidential race.

So the bottom line is that it’s anyone’s guess right now who will win not only Iowa, but the Democratic nomination. Stay tuned.