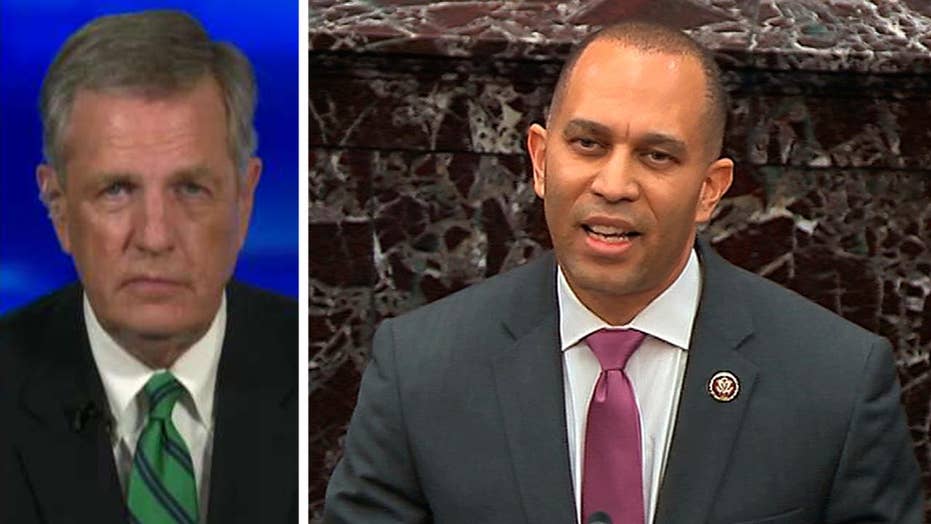 Hume: Democrats can still impacts Trump's agenda and campaign without a conviction

Will the impeachment of President Trump help or hurt Democrats? It depends on who you ask and if polls are accurate.

According to a CNN poll out this week, 51 percent of Americans want the Senate to remove our impeached president from office.

The Republican-led Senate voted Tuesday and Wednesday morning to block more evidence, documents and witnesses from being presented in Trump’s impeachment trial at this time. But a new Monmouth University poll shows that 57 percent of Americans believe the House impeachment managers should be able to present new evidence and witnesses in the Senate trial.

BRIT HUME: WHY TRUMP MAY NOT EMERGE FROM SENATE IMPEACHMENT TRIAL UNSCATHED

Opinion polls show solid support for the Trump impeachment inquiry itself, even though the public is more reluctant to remove Trump from office.

I know there are those who look at history. Rep. Bradley Byrne, R-Ala., for example, predicted that Democratic candidates will be hurt in November because House Democrats impeached the president.

Byrne and many others note that the impeachment of former President Bill Clinton hurt congressional Republicans when elections were held, costing them seats. They look at opinion polls that show Trump’s approval ratings holding steady, and showing independent swing voters nearly split on impeachment.

But these are very different times, different voters and different issues than during the Clinton impeachment 21 years ago.

So could this happen again?

Sure, the impeachment of President Trump could mobilize a set of voters in a way that helps him in his bid for reelection. But there is other data to consider in addition to the polls.

For example, the Democrats running for president in 2020 have thus far raised more than three times as much money as Trump, which is unprecedented for a recent incumbent. That shows that excitement among voters is certainly on the Democrats side at this time.

And then we need to look at pure numbers in the Senate. In November there will be 35 Senate seats up for grabs. A total of 23 of those seats are now held by Republicans and a handful of those are in states that have become more purple or are outright blue.

All in all, the political effect of impeachment is simply unknowable. But many of us on the left believe that it’s not House Speaker Nancy Pelosi, D-Calif., and her party that should worry about the electoral impact of impeachment. We believe Senate Majority Leader Mitch McConnell, R-Ky., is the one who should be worried.

McConnell – who is doing everything humanly possible to stop the Senate from removing Trump from office – will succeed in that effort, because 20 Republican senators would have to join all 47 Democrats in the chamber to convict Trump. That won’t happen.

But Trump’s acquittal in his Senate trial could be a short-lived victory if it costs Republicans their Senate majority and if the trial shines a spotlight on the president’s misconduct strong enough to help a Democrat defeat him in November.