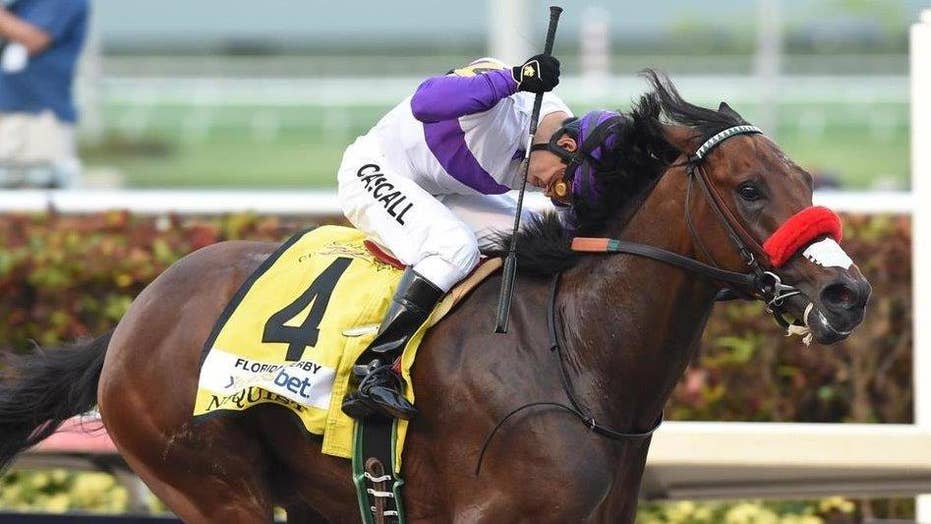 A day in the life of a Kentucky Derby racehorse

Abby Huntsman goes behind the scenes at Churchill Downs

Battle lines have been drawn. On Saturday, 20 horses – all 3-year-olds – will break from Churchill Downs’ starting gate sometime after 6:34 p.m. in the 142nd running of the Kentucky Derby. Oddsmakers list Nyquist (3-1) and Exaggerator (8-1) as the early favorites, but the field is large, and anything can happen.

Still, Nyquist has earned the public’s trust. He’s nothing if not consistent. The Uncle Mo colt has finished first in each of his seven starts – four victories in high-end Grade I stakes races, two others in Grade II stakes – and he’s earned more than $3.2 million along the way. Heck, Nyquist even won his maiden race.

On top of that, Nyquist has already seen and beaten his Derby competition. Exaggerator, Brody’s Cause (who won the Blue Grass Stakes in April) and Mohaymen have all finished behind him.

Back in February, an odds-on Nyquist bested Exaggerator by a length-and-half in Santa Anita’s San Vicente Stakes. After the race Keith Desormeaux, Exaggerator’s trainer, exclaimed, “Goodness gracious, can anyone not be a believer in Nyquist now? ... That was an awesome race.” Then last month, in the mile-and-an-eighth Florida Derby, Nyquist stared down Mohaymen and rolled to a victory of more than three lengths. Mohaymen finished fourth.

That was a big win for Nyquist. Mohaymen had been undefeated, with four straight graded stakes wins in New York and Florida. He was the King of the East, so to speak.

In a post-race interview, Kiaran McLaughlin, Mohaymen’s trainer, could only offer his hopes for his horse: “With the track you never know ... We’ll regroup,” said McLaughlin, who knows a thing or two about horses, having won the Belmont Stakes with Jazil in 2006.

Nyquist still has his doubters, and that’s understandable. His races have been visually compelling, but they haven’t been about blazing speed. As Steve Crist at the Daily Racing Form framed it, “The knocks are that he has yet to run a particularly fast race ... his Florida Derby victory over two unaccomplished longshots proved little, and the pace-pressing son of Uncle Mo may have trouble with the Derby’s 10th furlong.”

By contrast, American Pharoah, who last year became the first Triple Crown winner since 1978, flashed the kind of speed usually associated with Derby winners in his pre-Derby races. Nyquist, not so much. His fastest race was less than a mile ­– seven-eighths of a mile to be exact. The Run for the Roses is 1 1/4 miles – 10 furlongs in racing parlance – and speed in shorter distances doesn’t necessarily translate into victory over a longer haul.

And even as American Pharoah edged closer to winning the Triple Crown, his owners knew that on any given Saturday, racing luck could not be ignored. As Justin Zayat, the stable manager at Zayat Stables, which owns American Pharoah, put it, “I always knew American Pharoah had talent, but I never thought in my wildest dreams that he would actually win the Kentucky Derby.” Enough said.

Nyquist’s connections are displaying the same kind of cautious optimism. After the colt’s final pre-Derby workout, his trainer, Doug O’Neill, took the long view, saying, “I’d be lying if I said every day you don’t kind of walk down the shed with one eye open, one eye closed – especially the longer you’re in it and the more you see, the more nerve-wracking it can be … But, you know, we’re very optimistic with Nyquist that we’re heading the right way.”

Over the past decade, the Derby betting favorite at post time has won the race four times – good odds as far as horse racing goes, but definitely not a lock.

The Kentucky Derby is an annual reminder of why people watch horses run. There is majesty in a horse going nearly 40 miles per hour with a rider on its back, fighting for every inch as though it were its last. For Nyquist and 19 other Derby entrants, the question is who will be first to the finish line.