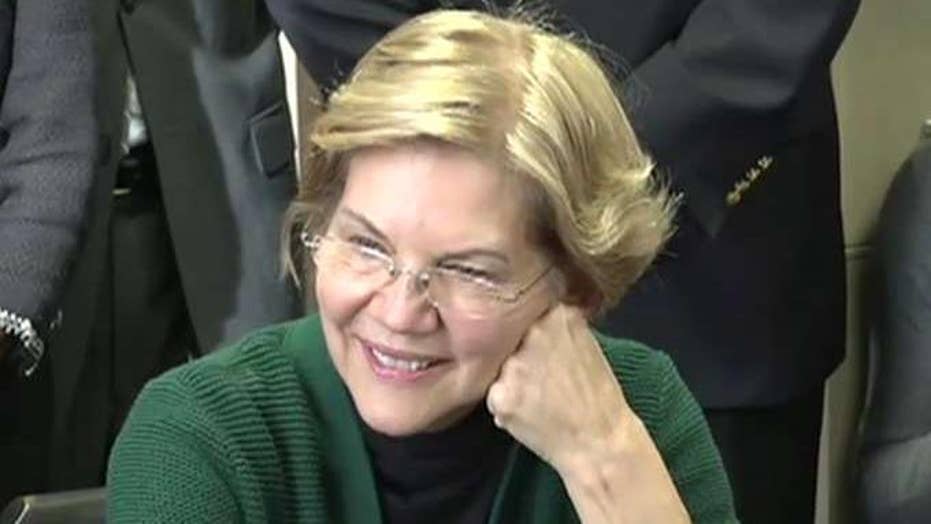 The closer you examine Sen. Elizabeth Warren’s “Medicare-for-all” plan, the worse it looks. In fact, if truth in packaging laws applied, she’d have to rename it “Worse care-for-all.”

Now – in addition to causing major problems in the delivery of health care, raising our taxes and creating a costly and unneeded government bureaucracy – we find that WarrenCare has another harmful side-effect.

Unlike the single-payer health care plans offered by other candidates competing against her for the Democratic presidential nomination, WarrenCare has a little-noticed twist that could end up going down as one of the most corrupt crony schemes ever enacted into law.

The senator from Massachusetts wants to impose regulations that would shift the cost of health care to businesses in many Republican-leaning states, while significantly reducing health care costs for businesses in states that usually vote for Democrats.

Warren’s crony health care scheme is part of her larger proposal to find trillions of dollars to pay for a national single-payer health care system.

You may have already heard that WarrenCare would create a slew of new price controls and taxes on businesses – including “targeted taxes and fees on financial firms” and a new fee on “big banks.”

But what hasn’t been sufficiently publicized is that Warren’s plan would require companies currently making contributions for their employees’ health insurance to pay to the government about 98 percent of that amount in the form of a new federal tax. This would increase over time as health care costs increase.

The idea here is to force companies to continue contributing money into the health care system while eliminating most forms of private health insurance.

According to Warren, U.S. companies “are projected to pay nearly $9 trillion over the next 10 years, mostly on employer contributions for employee health insurance and on health-related expenses for employees under workers’ compensation and long-term disability.”

The senator wants that money to go to the federal government instead of the companies that now compete with each other to provide health insurance.

Competition, of course, forces companies to provide the best coverage they can for the lowest costs. Companies that do this best prosper, while companies that don’t do a good job eventually fail and go out of business. This is how the free market system works and it has made American the richest and most prosperous nation on the planet, with the best health care system as well.

The government has no incentives to be efficient and hold down costs – it can always raise taxes higher and higher to make up for the inefficient and costly services it provides. And Warren wants the government to get bigger and bigger and take over more and more functions now performed by the private sector.

Warren’s proposal would push health care costs down by thousands of dollars in higher-cost states while increasing costs dramatically in lower-cost states. And guess what? By a remarkable coincidence, people in the lower-cost states are far more likely to vote for Republicans.

Currently, health insurance costs vary wildly from state to state. These cost differences are the result of numerous factors, including cost-of-living and tax and regulatory differences. That means if the federal government were to impose a new tax on businesses in line with current health care spending, businesses in some states would pay a lot less than businesses in others. To “fix” that problem, Warren would “gradually” alter her proposed business tax.

I know, this sounds complicated and confusing. That’s very deliberate.

The shift Warren is calling for might seem like a relatively small change, but for businesses in states that currently have higher-than-average or lower-than-average health insurance costs, these tax changes would have an enormous impact.

Warren’s proposal would push health care costs down by thousands of dollars in higher-cost states while increasing costs dramatically in lower-cost states. And guess what? By a remarkable coincidence, people in the lower-cost states are far more likely to vote for Republicans.

To give you a sense of just how big of an impact this plan would have on businesses, note that a large business in Massachusetts with 1,000 employees enrolled in a family health insurance plan is, on average, currently paying about $16.1 million in health insurance premiums.

Say what you want about Warren, but she isn’t stupid. There’s a reason her proposal is designed to shift costs from some businesses to others: It would provide huge benefits to businesses in blue states while punishing businesses in states that traditionally vote for Republicans.

Of the 10 states with the lowest average annual employer contribution for a family health insurance plan, eight voted for Donald Trump in 2016.

Of the 10 states with the highest premiums – including Washington, D.C. – seven voted for Hillary Clinton in 2016, and eight voted for President Barack Obama in 2012, including highly populated deep-blue states like New York, Massachusetts, New Jersey and Illinois.

Is this just a coincidence? Of course not! It’s part of a much larger plan by Warren and the Democrats to punish their political and economic “enemies” while consolidating power close to home.

When applied across the entire country, Warren’s plan would suck hundreds of billions of dollars out of many conservative regions of the country while infusing the liberal Northeast and West Coast with bucket loads of cash.

Warren has built her campaign around the idea that she’s going to really stick it to big businesses – forgetting, of course, that these businesses actually employ people who provide for families. She apparently never heard the old saying: Without employers, you can’t have employees.

But it turns out the businesses Warren had in her sights right from the very start weren’t all big businesses, per se, but rather those that committed the unforgivable sin of operating in states that usually vote for Republicans.

Want to reward blue state political allies by destroying economies in red states across the country? Yeah, Elizabeth Warren has a plan for that.