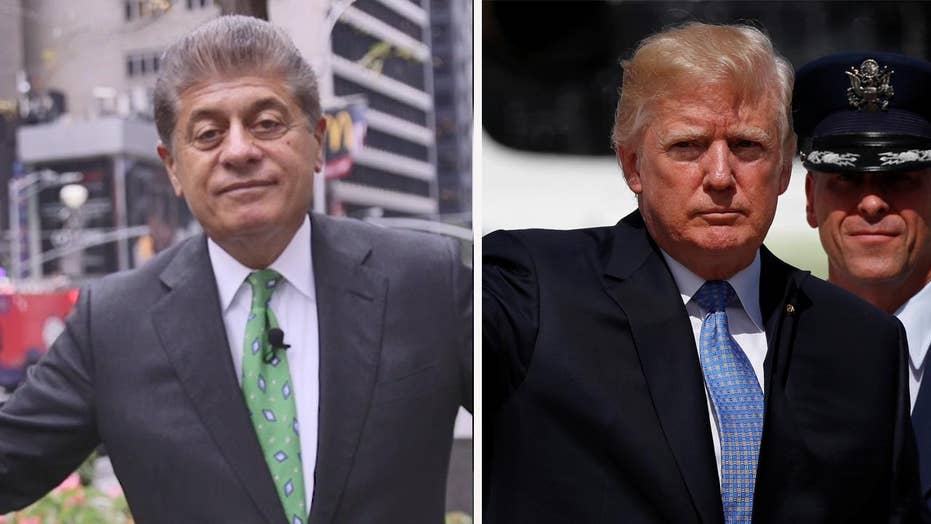 Judge Napolitano's Chambers: Judge Andrew Napolitano explains what President Trump's new travel ban order entails and how the courts may treat this order the same as the previous iterations

The weird odyssey of President Donald Trump’s travel bans continues. The original ban, signed as an executive order Jan. 27, barred absolutely all immigrants and refugees from seven predominantly Muslim countries. The countries had actually been chosen by the State Department of former President Barack Obama. Obama never signed a ban, but Trump did.

The first travel ban never took effect, as the federal courts in Brooklyn, Seattle and Honolulu in which it was challenged by people from the affected countries who had visas to enter the United States enjoined it almost immediately. When the Department of Justice challenged those injunctions, it lost. The basis for the judicial invalidations of the first ban was that it constituted a government decision based on religion.

Since the religion clauses of the First Amendment protect everyone -- not just citizens -- and since the seven countries designated by the Obama and Trump State departments and barred under Trump’s executive order were predominantly Muslim, and since candidate Trump had made very harsh anti-Muslim comments during the campaign, the courts ruled that the travel ban was actually a Muslim ban and thus was unconstitutional.

Before the DOJ could appeal its losses to the Supreme Court, President Trump signed a second travel ban March 6. It rescinded the original ban and articulated a national security and geographic basis for barring entry from six countries (eliminating Iraq). It, too, was challenged in the same federal courts as the first ban, and it suffered the same fate for the same reasons. This second ban reached the Supreme Court, which, by a 6-3 vote, invalidated the injunctions imposed by lower-court judges against it but carved out an exemption from the ban.

The carve-out exempted from the ban all refugees and immigrants from the designated countries who have “bona fide relationships” here in the United States. The dissenting justices argued that the Supreme Court has no business rewriting a presidential executive order and observed that the language in the carve-out -- bona fide relationships -- is vague and could spawn litigation over its meaning.

When the Department of Homeland Security defined "bona fide relationships" to include in-laws but not cousins or grandparents, that definition was challenged. The same federal judges who had invalidated the first and second bans then interpreted the phrase to permit the entry of anyone who had any family relationship in the U.S., any job offer, any offer of university admission or any offer of settlement here by a refugee program. The DOJ appealed that to the Supreme Court, and it removed the refugee settlement programs from the definition of bona fide relationships but permitted the remainder of the judicially determined phrase to stand. The Supreme Court also ordered oral argument on the constitutionality of the second travel ban and scheduled it for Oct. 10.

Last week, the court realized that the second ban expires later this week, well before Oct. 10. This is of profound constitutional significance because the expiration of the ban renders it moot. The Constitution limits the jurisdiction of all federal courts to real cases and controversies. If the ban does not exist on Oct. 10, there will be no case or controversy over it, and the Supreme Court will have no jurisdiction -- no federal court will -- to hear the case. Earlier this week, the Supreme Court canceled the Oct. 10 oral argument.

Cognizant of the mootness issues addressed above and aware that the second ban expires at the end of this week, the president signed a third travel ban last Sunday night. The third ban adds immigrants and refugees from Chad, North Korea and Venezuela to the remaining countries articulated in the second ban. It includes the exemption of bona fide relationships, and it purports to be based on the unique problems from people whose origin is in an international hot spot. It is not couched as a Muslim ban. Of the added countries, North Korea is largely atheist, and Venezuela is largely Roman Catholic; the remaining countries are overwhelmingly Muslim.

The third ban, which takes effect Oct. 18 -- meaning that the president has chosen to impose no ban for 19 days -- will affect everyone without a bona fide relationship in the U.S., and it appears to be permanent. The third ban is far more legally sophisticated than its predecessors. It purports to address each country uniquely, and it clearly was written with an eye toward the lower-court rulings over which its predecessors stumbled.

I have serious misgivings about the morality and political wisdom of these travel bans. The right to travel and to escape oppression is a natural human right, with which no government may morally interfere. And the assumption that merely because a person belongs to a group defined by immutable characteristics of birth -- place of birth, in this case -- the person shares all the dominant traits of others in that group has been rejected as un-American for generations.

Yet the travel bans are constitutional. That is so because the Constitution reposes foreign policy in the president and because Congress has reposed in him the ability to establish and enforce travel bans, and the courts should be loath to second-guess the president on foreign policy. That is at least how the Supreme Court has spoken on this to date. Yet look for this ban to be enjoined by lower federal courts before it takes effect. Their antipathy to all things Trump seems unabated.