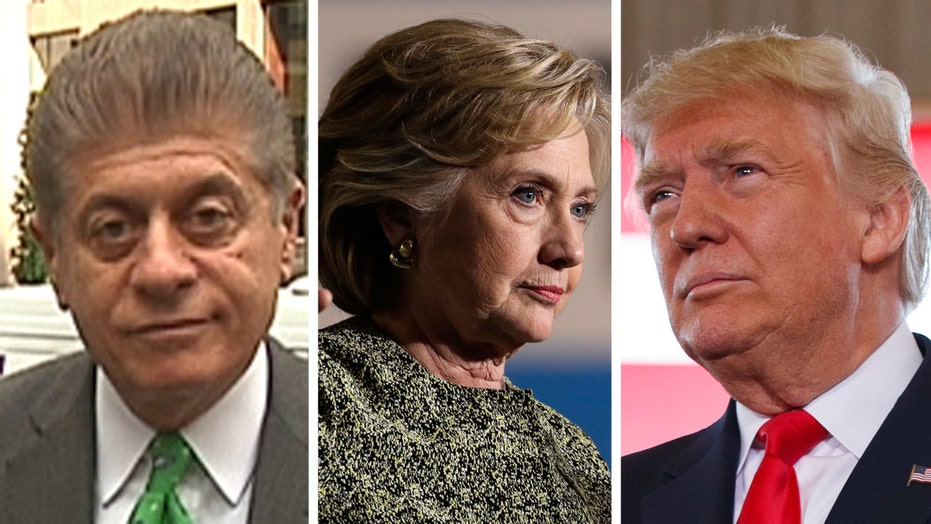 Judge Napolitano's Chambers: Judge Andrew Napolitano explains how the press can publish information - like WikiLeaks' Hillary Clinton emails - even if that information has been stolen

It seems that at every turn during this crazy presidential election campaign -- with its deeply flawed principal candidates (whom do you hate less?) -- someone’s personal or professional computer records are being hacked. First it was Hillary Clinton’s emails that she had failed to surrender to the State Department. Then it was a portion of Donald Trump’s 1995 tax returns, showing a $916 million loss he claimed during boom times. Then it was those Clinton emails again, this time showing her unacted-upon doubts about two of our Middle Eastern allies’ involvement in 9/11 and her revelation of some secrets about the killing of Usama bin Laden.

The reason we know about these leaks is the common thread among them -- the willingness of the media to publish what was apparently stolen. Hence the question: Can the government hold the press liable -- criminally or civilly -- for the publication of known stolen materials that the public wants to know about? In a word: No.

When Daniel Ellsberg, an outside contractor working in the Pentagon, stole a secret study of U.S. military involvement in Vietnam in 1971, which revealed that President Lyndon Johnson had lied repeatedly to the public about what his military advisers had told him, the Department of Justice secured an injunction from U.S. District Judge Murray Gurfein, sitting in Manhattan, barring The New York Times from publishing what Ellsberg had turned over to Times reporters. Such an injunction, known as a “prior restraint,” is exceedingly rare in American legal history.

This is so largely because of the sweeping language of the First Amendment -- “Congress shall make no law … abridging the freedom of speech, or of the press” -- as well as the values that underlie this language. Those values are the government’s legal obligation to be accountable to the public and the benefits to freedom of open, wide, robust debate about the government -- debate that is informed by truthful knowledge of what the government has been doing.

Those underlying values spring from the Framers’ recognition of the natural right to speak freely. The freedom of speech and of the press had been assaulted by the king during the Colonial era, and the Framers wrote a clear, direct prohibition of such assaults in the initial amendment of the new Constitution.

Notwithstanding the First Amendment, Judge Gurfein accepted the government’s argument and found that palpable, grave and immediate danger would come to national security if the Times were permitted to publish what Ellsberg had delivered.

The Times appealed Judge Gurfein’s injunction, and that appeal made its way to the Supreme Court. In a case that has come to be known as the Pentagon Papers case, the high court ruled that when the media obtains truthful documents that are of material interest to the public, the media is free to publish those documents, as well as commentary about them, without fear of criminal or civil liability.

The government had argued to the Supreme Court -- seriously -- that “'no law' does not mean 'no law'” when national security is at stake. Fortunately for human freedom and for the concept that the Constitution is the supreme law of the land and means what it says, the court rejected that argument. It also rejected the government’s suggested methodology.

The government argued that because Congress and the president had agreed to void a constitutional mandate -- the First Amendment’s “no law” language -- in deference to national security, the judiciary should follow. That methodology would have rejected 180 years of constitutional jurisprudence that taught that the whole purpose of an independent judiciary is to say what the Constitution and the laws mean, notwithstanding what Congress and the president want. Were that not so, the courts would be rubber stamps.

Moreover, the high court ruled, it matters not how the documents came into the possession of the media. The thief can always be prosecuted, as Ellsberg was, but not the media to which the thief delivers what he has stolen. In Ellsberg’s case, the charges against him were eventually dismissed because of FBI misconduct in pursuit of him -- misconduct that infamously involved breaking in to his psychiatrist’s office looking for dirt on him.

Since that case, the federal courts have uniformly followed the Pentagon Papers rule. Hence, much to the chagrin of the Obama administration, the media was free to publish Edward Snowden's revelations about the ubiquitous and unconstitutional nature of government spying on Americans by the National Security Agency. The same is true for Trump’s tax returns and Clinton’s emails.

Are these matters material to the public interest?

Of course they are. In a free society -- one in which we do not need a government permission slip to exercise our natural rights -- all people enjoy a right to know if the government is spying on us in violation of the constitutionally protected and natural right to privacy. We also have a right to know about the financial shenanigans or uprightness and the honesty or dishonesty of those who seek the highest office in the land. That is particularly so in the 2016 campaign, in which Trump has argued that his business acumen makes him uniquely qualified to be president and Clinton has offered that her experiences as secretary of state would bring a unique asset to the Oval Office.

Efforts to silence the press or to punish it when it publishes inconvenient truths about the government or those who seek to lead it are not new, and the vigilance of the courts has been unabated. Thomas Jefferson -- himself the victim of painful press publications -- argued that in a free society, he’d prefer newspapers without a government to a government without newspapers. Would Clinton or Trump say that today?