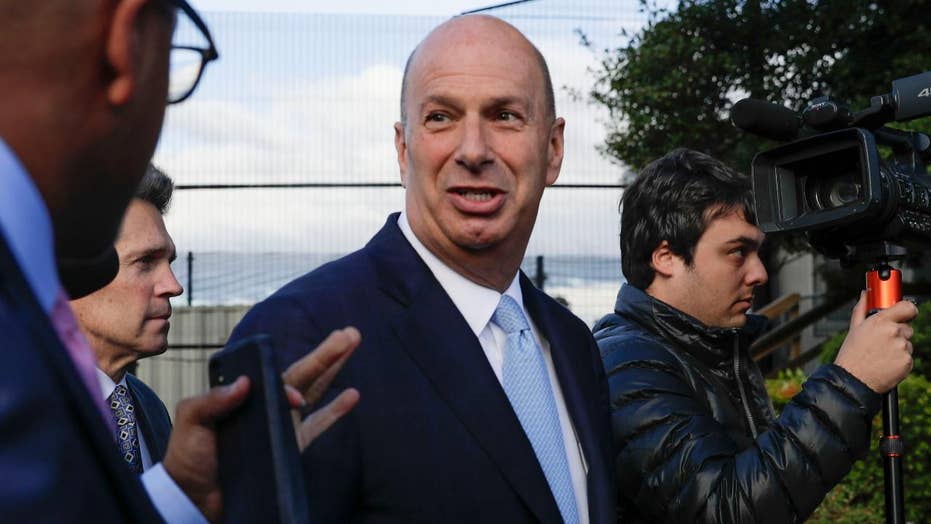 Sondland submitted a 3-page addendum to the House Intelligence Committee after remembered an additional meeting he had with a Ukrainian official; Gillian Turner reports from Capitol Hill.

Peggy Noonan, who wrote brilliant speeches for President Ronald Reagan and now writes gifted columns for The Wall Street Journal, and whose friendship I have enjoyed for many years, recently put forth a hypothetical historical analogy that stopped me in my tracks.

Let's look at some background before getting to it.

The House of Representatives has adopted a resolution authorizing formal investigations into whether President Trump has committed impeachable offenses while in office. The resolution directed five House standing committees to investigate the president's behavior and to report the results of those investigations to the House Judiciary Committee.

STEVE HILTON: THE TRUTH ABOUT IMPEACHMENT – HINT: IT'S REALLY ABOUT THIS

Under House rules – enacted in January 2015, when Republicans had the majority – the Judiciary Committee has jurisdiction over impeachment, and it must air publicly the evidence it contends supports any articles of impeachment it may recommend to the full House.

Thus far, the House Permanent Select Committee on Intelligence has been holding closed-door hearings gathering evidence on these two points of constitutional inquiry. Why closed-door? No prosecutor or defense counsel would or ethically could offer a witness to testify publicly in a case without first having interviewed that witness in private.

These interviews are often open-ended, and the lawyer or investigator conducting the interview does not know in advance the full extent of what the witness can provide. Secrecy at this point enhances candor and permits an honest evaluation of the witness's credibility and usefulness to the case.

How did Congress acquire impeachment evidence in the past? In the cases of Presidents Richard Nixon and Bill Clinton, special prosecutors gathered evidence of presidential wrongdoing in secret and then presented that evidence to the House Judiciary Committee, which aired it publicly.

Today, even though the initial interviews of witnesses are taking place in secret, the Intelligence Committee is releasing transcripts of those interviews for the public to examine, well before it reports to the House Judiciary Committee.

We know from those transcripts that Trump's threat to hold up $391 million in military hardware and financial aid to our ally Ukraine – which is fighting a bloody war with Russia – until the Ukraine government gave him a "favor" by commencing an investigation of former Vice President Joe Biden and his son Hunter, was not a one-off.

We know from the testimony of these witnesses that the demand for the favor was the end part of a months' long concerted effort run by the president's personal lawyer, Rudy Giuliani – himself now the subject of two federal criminal investigations – to use the government of Ukraine to deliver dirt on Biden for Trump's reelection campaign.

Trump has argued that this was not a quid pro quo, e.g., give me the dirt on Biden, and you will get your American aid. He makes that argument solely on an incomplete transcript of his now-infamous July 25 telephone conversation with his Ukrainian counterpart who, when he asked for the aid, was met with the request for the favor.

Now back to Peggy Noonan. In her piece in last Saturday's Wall Street Journal, she asked how history would view President Franklin Delano Roosevelt if, when asked by British Prime Minister Winston Churchill for help fighting the Nazis in 1940, he had conditioned that aid on the provision of dirt on Wendell Willkie, Roosevelt's eventual Republican opponent in the 1940 presidential election. We would be repulsed to learn this.

Of course, Roosevelt never made such a Trumpian demand. He understood how vital the defense of Great Britain from the Nazi invasion was for humanity, for our ally and, ultimately, for American national security.

Trump's demand manifested no such Rooseveltian understanding. In fact, Trump should have known that the act of soliciting assistance for his campaign from a foreign government, whether directly by him or indirectly by Giuliani, is defined as criminal under federal law – a high crime, as the Constitution puts it.

He also should have known that refusing to perform a lawful duty, releasing the $391 million Congress had authorized until a personal favor comes his way, is also defined in federal law as criminal – bribery, as the Constitution puts it.

All of this has been laid out in the transcripts of witness interviews that will soon become public testimony. All of this has given the president's congressional supporters heartburn. They have seen the transcripts and have dropped their "no quid pro quo" argument, and now make the legally absurd contention that all evidence derived from witness interviews conducted in secret – with Republican House members present and participating – is somehow tainted and should be thrown out. Even Nixon and Clinton made no such arguments.

Then, in another pivot, congressional Republicans have argued that witnesses against Trump are secret or overt Democrats and cannot be trusted. Oy, that's why we have cross-examination. Some congressional Republicans have even threatened to out two federal employees among the witnesses whose identities are protected under the federal whistleblower statutes -- statutes that these members of Congress have sworn to uphold.

Oh, how the times have changed. Roosevelt jumped at the chance to help an ally fight a tyrant. The Noonan analogy is brilliant and telling, and the president's congressional supporters know it. That's why their defense is to attack the witnesses.

These congressional Republicans and Trump are strange but tenacious bedfellows. Three years ago, they were shouting about law and order over Hillary Clinton's emails. Today, they are shouting to let Trump be Trump. That's what happens when the facts and the law are against them.