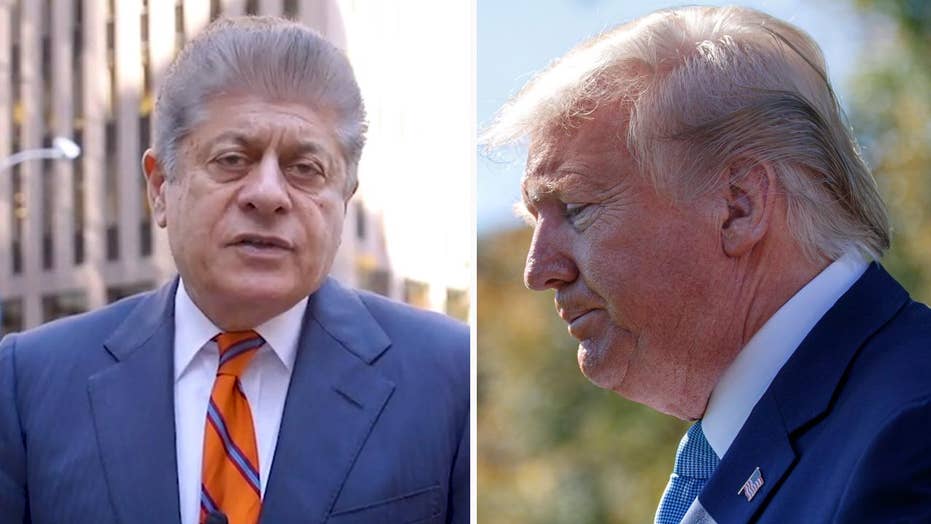 Judge Napolitano: Trump should uphold the Constitution, not disparage it

Judge Napolitano's Chambers: Judge Napolitano explains that President Trump has taken an oath to uphold the entire Constitution, not to refer to certain parts as 'phony.'

In nearly three years in office, President Trump has spent federal dollars not authorized by Congress, separated families and incarcerated children at the Texas-Mexico border in defiance of a federal court order, pulled 1,000 American troops out of Syria ignoring a commitment to allies and facilitating war against civilians, and sent 2,000 troops to Saudi Arabia without a congressional declaration of war.

He has also criminally obstructed a Department of Justice investigation of himself but escaped prosecution because of the intercession of an attorney general more loyal to him than to the Constitution.

At the outset of his presidency, Trump took the presidential oath of office promising that he would faithfully execute his obligation to preserve, protect and defend the Constitution.

James Madison, the scrivener of the Constitution, insisted that the word "faithfully" be in the presidential oath and that the oath itself be in the Constitution to remind presidents to enforce laws and comply with constitutional provisions, whether or not they agree with them, and to immunize the oath from congressional alteration.

Earlier this week, Trump referred to a clause in the Constitution as "phony," and he thereby implied that he need not abide it nor enforce it, notwithstanding his oath.

The Constitution was written in Philadelphia during the summer of 1787. The framers – the 55 state delegates to the Constitutional Convention who authored the Constitution – had just completed fighting the Revolutionary War, which had ended six years earlier.

While Americans universally revere the American Revolution today, that was not the case at the time it was fought. Professor Bernard Bailyn of Harvard, whose 75 years of professional study of the colonial mindset is without peer, has argued that in the 1780s about one-third of the colonists supported the revolution, while around the same number favored staying in the British Empire, and about the same number were indifferent.

By 1787, according to Bailyn, there were substantial groups of wealthy persons in America who retained their loyalty to the British king, and there were government officials here who had originally obtained their jobs by royal appointment.

Can the president lawfully enforce only the clauses of the Constitution with which he agrees and ignore those with which he disagrees? In a word: No.

All of this was known to the framers, who feared the resurgence of British influence in the American government. Their fears centered around the corruption induced by titles of nobility – which in those days were often accompanied by lands and income – and gifts of money or real estate.

In order to allay those fears and assure Americans that officials in the new federal government would be immune from foreign seduction, the framers included the Emoluments Clause in the Constitution.

That clause prohibits all federal officials from receiving titles of nobility and any gift, income or fee "of any kind whatever" from a foreign government.

The Constitution is known for phrases of generality and elasticity, the meanings of which are often capable of reinterpretation by modern standards. This is not so for the Emoluments Clause. It originally presented and continues to present an absolute prohibition of the receipt of anything of value by a federal government officeholder from a foreign government.

Last week, Mick Mulvaney, the president's acting chief of staff, announced a novel interpretation of this clause contending that it only prohibited "profits" to federal officeholders from foreign governments.

By that interpretation, Mulvaney announced, Trump was able to offer a resort in South Florida owned substantially by a family corporation he controls as the host of his next meeting of G-7 – a group that includes heads of government from six foreign countries – so long as the resort did not earn a profit from the gathering.

After a weekend of torrential criticism, Trump announced that he had changed his mind and said he would not host the G-7 meeting at the Miami area resort. Yet, in the process of doing so, he characterized the Emoluments Clause as "phony."

This is most unusual and potentially dangerous, and it raises the question: Can the president lawfully enforce only the clauses of the Constitution with which he agrees and ignore those with which he disagrees? In a word: No.

The doctrine of the separation of powers – which is the backbone of the Constitution – states that Congress writes the laws, the president enforces them, and the courts interpret them. It also offers that the governmental roles of the three branches cannot be intermingled or traded without doing violence to the personal liberties that the separation was intended to secure.

If the president could pick and choose which laws to enforce and which parts of the Constitution to ignore, he effectively would be deciding what the laws mean – a judicial function – and which laws have vitality and which do not – a congressional function.

Trump has become known for forceful and often tasteless banter. He publicly calls people crude names, uses foul language and sends dog whistles of lawless behavior to much of his base. All that is a question of free speech, personal taste and political risk.

But threats to ignore parts of the Constitution are not matters of speech, taste or risk. They reveal character traits that question Trump's fitness for office.