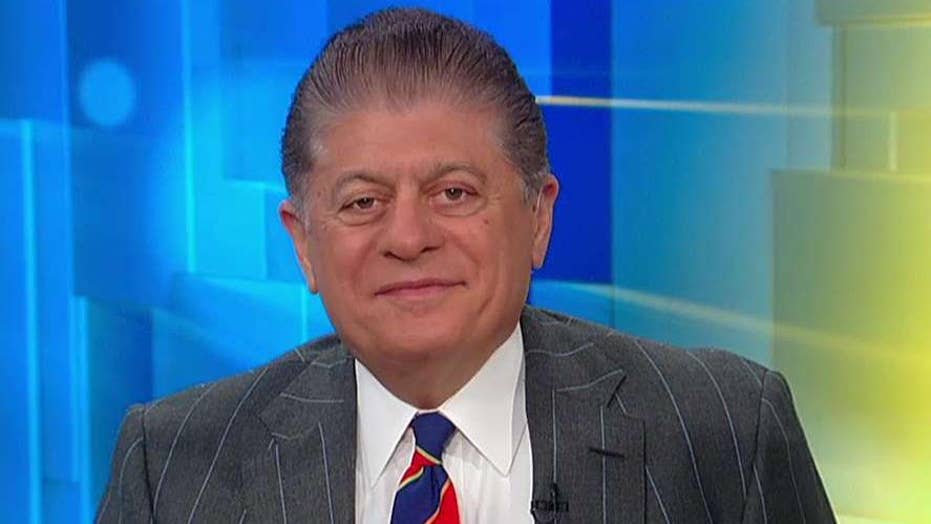 Judge Napolitano to Trump: Don't testify in impeachment probe, run away from this 'dangerous environment'

Throughout the House of Representatives' impeachment inquiry, President Trump has been pushing Attorney General William Barr to make a public statement on the president's behalf. He wants Barr to state publicly that even if the president did what congressional Democrats claim -- conditioning the release of $391 million in vital military and financial aid to Ukraine upon the announcement of a Ukrainian government investigation of former Vice President Joe Biden -- such behavior did not constitute impeachable offenses.

The attorney general, to his credit, has declined to comply with the president's wishes. But he did stir the pot earlier this week with a partisan speech on the nature of the modern American presidency. That speech -- by its assertion that liberals have neutered the presidency or shackled it in chains -- must have been written in an alternate reality.

It is unseemly for the chief law enforcement officer in the land to make partisan attacks against ideological groups. This gives the impression that he is a political hack, not an impartial instigator and supervisor of criminal prosecutions.

ANDREW MCCARTHY: SCHIFF GAMES TRUMP IMPEACHMENT SHOW — IN LEGITIMATE PROCEEDINGS, YOU CAN'T HAVE IT BOTH WAYS

However, there is something much larger here than Barr's attempts to placate his boss. Barr’s impolitic speech was also a full-throated defense of the imperial presidency, no matter which party occupies the White House.

When Woodrow Wilson came to the presidency, he had new ideas about the nature of the federal government. And he succeeded in imposing those ideas on the executive branch he headed and on the Congress whose appetitive for more power he whetted.

Wilson turned a modest constitutional presidency on its head. He argued, for example, that because the First Amendment prohibits Congress from infringing upon the freedom of speech, it imposed no such restraints on the presidency. That was his justification for dispatching a federal police force he created on his own -- which would later become the FBI -- to arrest young men for singing German beer hall songs in bars and taverns during World War I and for reading aloud the Declaration of Independence near the entrances to draft registration facilities.

Wilson also argued that the concept of the president as “head of state” gave him powers not articulated in the Constitution -- powers inherent in foreign heads of state. From this he crafted the Wilsonian model -- the feds can do whatever draws political support, except that which the Constitution expressly prohibits.

All post-Wilson presidents have followed his model, and this is where Attorney General Barr misses his mark. Madison predicted that the most feared branch of the new government -- the one that could get away with the most lawlessness, the one whose power would expand at the expense of the other two -- would be the presidency.

Franklin D. Roosevelt closed banks and seized gold. Harry Truman unleashed domestic spies on Americans and killed and wounded hundreds of thousands of innocent Japanese civilians at Hiroshima and Nagasaki. Dwight Eisenhower ratcheted up domestic spying. Lyndon B. Johnson fought an illegal war by duping Congress into funding it. Richard Nixon spied on folks who exercised free speech that was critical of him and bombed Cambodia without any congressional authorization.

All of these presidential misdeeds were without constitutional authority and without sanction. Stated differently, they got away with it. Except in Nixon's case, not Congress, not the courts, and not the American public interfered. In fact, they looked the other way as the imperial presidency grew.

The common historical theme in all this is the willingness of Congress and the American public to accept claims of temporary safety over the loss of personal liberty.

The presidencies of George W. Bush and Barack Obama are particularly instructive. A Republican Congress gave Bush the power to force computer service providers and telecoms to work as federal spies against their will. And a Democratic Congress gave Obama the power to regulate the personal delivery of health care in private settings.

Trump has inherited all this, and Barr knows all this. No post-Wilson president has been loyal to his oath to remain within the confines of the Constitution, because power by its nature expands. And power once given -- by Republican Congresses to Republican presidents and by Democratic Congresses to Democratic presidents -- remains in the presidency.

When Rome was threatened by serious invasions of pirates during the last days of the Republic, the Roman Senate gave near-dictatorial powers to the famous general Pompey, which he used to fight and defeat the invaders. When the wars were over, Pompey retained his powers. Cicero famously asked why the Republic repelled invaders so as to enjoy the rule of law only to give it away to a strong man. He complained that the Senate gave so much power to the general, it was now powerless to contain him.

And then, after Pompey passed his powers on to Caesar, the Republic ended and the imperial dictatorship began.