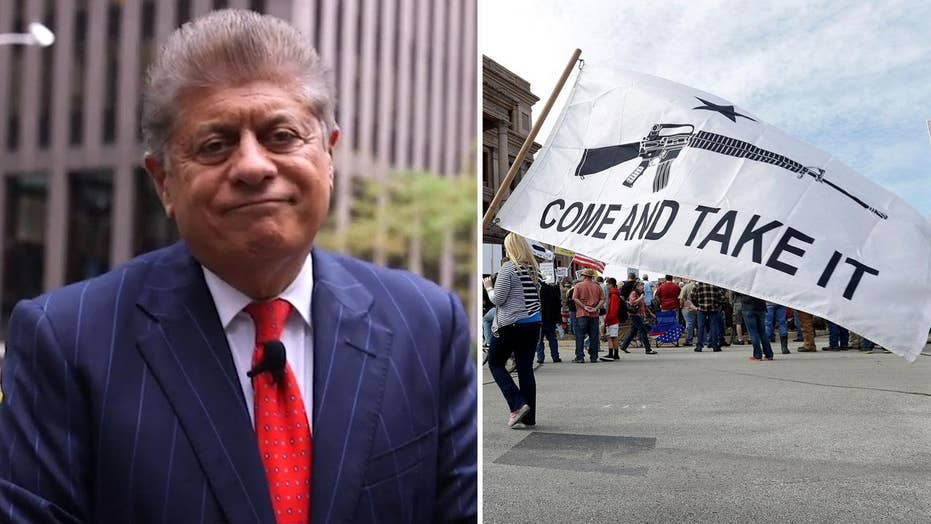 Judge Napolitano: The dangerous urge to do something in the face of tragedy

Judge Napolitano's Chambers: Judge Andrew Napolitano weighs in on the dangers to the Second Amendment by both political parties in the wake of mass shootings. What confiscating guns or 'red flag' laws will mean for your constitutional rights.

When tragedy strikes, as it did in two mass killings this month, there is always the urge to pressure the government do something.

Governments are animated by the belief that doing something — any demonstrable overt behavior — will show that they are in control. I understand the natural fears that good folks have that an El Paso or a Dayton episode might happen again, but doing something for the sake of appearance can be dangerous to personal liberty.

When the Constitution was written, the idea of owning arms and keeping them in the home was widespread. The colonists had just defeated the armies of King George III. The colonial weapon of choice was the Kentucky long rifle, while British soldiers used their army-issued version of Brown Bessies.

Each rifle had its advantages, but the Kentucky (it was actually a German design, perfected and manufactured in Pennsylvania) was able to strike a British soldier at 200 yards, a startlingly long distance at the time. The Bessies were good for only about 80 yards.

Put aside the advantages we had of the passionate defense of freedom and homeland, to say nothing of superior leadership. It doesn't take any advanced understanding of mathematics or ballistics to appreciate why we won the Revolution.

It is a matter of historical fact that the colonists won the war largely by superior firepower.

Six years after the war was over, delegates met in Philadelphia in secret and drafted what was to become the Constitution. The document, largely written in James Madison's hand, was then submitted to Congress and to the states, which began the process of ratification.

Yet the memory of a Parliament that behaved as if it could write any law, tax any event and impair any liberty, coupled with the fear that the new government here might drift toward tyranny, gave birth to the first 10 amendments to the Constitution — the Bill of Rights.

The debate over the Bill of Rights was not about rights; that debate had been resolved in 1776 when the Declaration of Independence declared our basic human rights to be inalienable. The Bill of Rights debates were about whether the federal government needed restraints imposed upon it in the Constitution itself.

Fast-forward to today, and we see the widespread and decidedly un-American reaction to the tragedies of El Paso and Dayton. Both mass murders were animated by hatred and planned by madness. But because both were carried out using weapons that look like those issued by the military, Democrats have called for the outright confiscation of these weapons.

Where is the constitutional authority for that? In a word: nowhere.

The government's job is to preserve personal liberty. Does it do its job when it weakens personal liberty instead? Stated differently, how does confiscating weapons from the law-abiding conceivably reduce the ability of madmen to get those weapons? When did madmen begin obeying gun laws?

These arguments against confiscation have largely resonated with Republicans. Yet — because they feel they must do something — they have fallen for the concept of limited confiscation, known by the euphemism of “red flag” laws.

The Republican proposal lowers the standard of proof to a preponderance of the evidence — "a more likely than not" standard. That was done because it is impossible to prove beyond a reasonable doubt that an event might happen. This is exactly why the “might happen standard” is unconstitutional and alien to our jurisprudence.

In 2008 Justice Antonin Scalia wrote for the Supreme Court that the right to keep and bear arms in the home is an individual pre-political right. Due process demands that this level of right — we are not talking about the privilege of a driving a car on a government street — can only be taken away after a jury conviction or a guilty plea to a felony.

The "might happen" standard of “red flag” laws violates this basic principle. The same Supreme Court case also reflects the Kentucky long gun lesson. The people are entitled to own and possess the same arms as the government; for the same reason as the colonists did — to fight off tyrants should they seize liberty or property.

If the government can impair Second Amendment-protected liberties on the basis of what a person might do — as opposed to what a person actually did do — to show that it is doing something in response to a public clamor, then no liberty in America is safe.

Which liberty will the government infringe upon next?