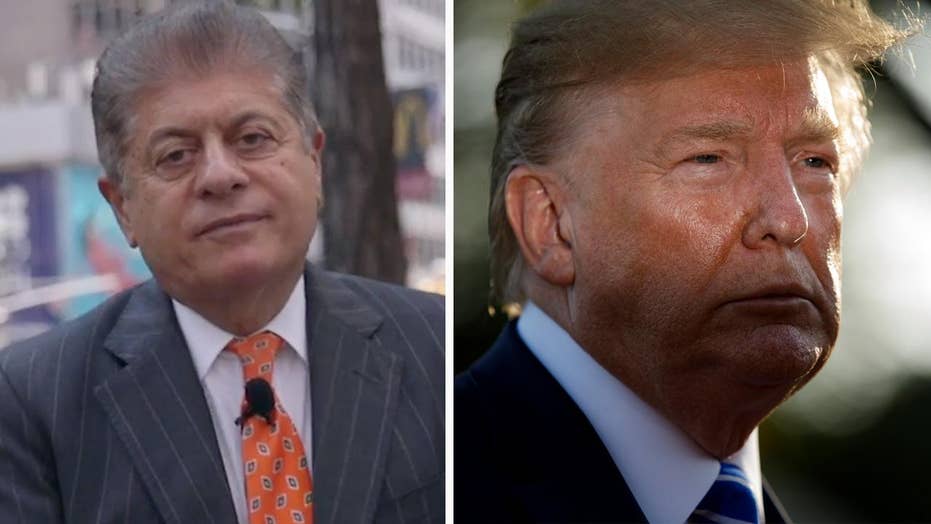 Judge Napolitano: The temptation of tyranny

Judge Napolitano's Chambers: Judge Andrew Napolitano explains how and when the president may have been given too much power and what that means for the future of our democracy.

Does the president of the United States have too much power?

That question has been asked lately with respect to President Trump's planned use of federal funds to construct 175 miles of sporadic barriers along portions of the nearly 2,000-mile U.S.-Mexico common border.

After Congress expressly declined to give him that money, Trump signed into law – rather than vetoed – the legislation that denied him the funds he sought and then spent the money anyway.

The question regarding presidential power has also been asked with respect to Trump’s imposition of sales taxes – Trump calls them tariffs -- on nearly all goods imported into the United States from China. These are taxes that only Congress can constitutionally authorize.

And the question of presidential power has been asked in connection with the presidentially ordered mistreatment of families seeking asylum in the United States by separating parents from children – in defiance of a court order.

PELOSI CLAIMS CONGRESS IS A 'SUPERIOR BRANCH' OF GOVERNMENT

The Constitution was written in the aftermath of the American Revolution, a war fought against a kingdom, most of whose domestic subjects articulated that the king had been chosen by God to rule over them.

The colonists in America, prodded by radicals like Sam Adams, Patrick Henry and Thomas Jefferson, profoundly rejected that idea. They argued that each individual was sovereign and a repository of natural rights. Jefferson articulated as much in the Declaration of Independence.

So, when it came time to craft a new government here, the drafters of the Constitution, led by Jefferson's friend James Madison, made certain that there would be no king. Congress would write the laws. The president would enforce them. The judiciary would interpret them. This separation of powers is what the late Justice Antonin Scalia called the most unique and effective aspect of American government.

For starters, Madison feared the accumulation of too much power in any one branch of the government. With the exception of the uniqueness and violence of the Civil War, for 130 years, the branches remained within their confines. For that matter, the federal government did so as well.

Congresses and presidents accepted the Madisonian view that the federal government could only do what the Constitution affirmatively authorized it to do, and all remaining governmental tasks would be addressed by the states. This, too, was part of Madison's genius in order to impede the concentration of too much power in the hands of too few.

All that changed when a former professor of constitutional law -- who was not a lawyer -- entered the White House. Woodrow Wilson believed and behaved as though Congress could legislate on any problem for which there was a national political will, except that which was expressly prohibited by the Constitution.

At the same time that Wilson was turning the Constitution on its head, he was also signing legislation that created the agencies of the administrative state. These agencies, he argued, should be filled with experts in their fields -- the Food and Drug Administration, the Federal Trade Commission, to name a few -- because experts would bring better government.

The agencies were authorized to write regulations that have the power of law, to enforce those regulations and to interpret them. This slippage of constitutional authority to creatures alien to the Constitution -- which branch of government are they in? -- masked a parallel slippage of power from Congress to the presidency.

The Constitution does not authorize any emergency powers; nevertheless, the War Powers Resolution lets the president fight any war for 90 days without congressional authorization, even though the Constitution makes clear that only Congress can declare war. Other national emergency statutes give presidents short-term near-dictatorial powers -- like imposing taxes by calling them tariffs -- without defining what is an emergency.

Scalia railed against all this -- and the Supreme Court often struck down power transfers from Congress to the president. It did so not to preserve the institutional integrity of Congress but to uphold the principle of the separation of powers that Madison crafted as a bulwark against tyranny. The constitutional allocation of power among the branches is not for them to alter.

Its equilibrium was intended to maintain tension and even jealousy among the branches -- and thereby undergird personal liberty. Madison's articulated fear was "a gradual concentration of the several powers in the same" branch. Scalia called this gradual concentration of power in the presidency a wolf in sheep's clothing that became a bare naked wolf.

After years of faithless Congresses legally but unconstitutionally ceding power to the presidency, we have arrived where we are today -- a president who spends unappropriated funds, raises taxes, defies courts and changes immigration laws on his own. I have written before that the Republicans who rejoice in this will weep over it when a Democrat is in the White House. No president should have unconstitutional powers.

I have also written that the guarantees of the Constitution -- separation of powers foremost among them -- are only effective when the folks in whose hands we repose the Constitution for safekeeping are faithful to their oaths to uphold it.

When they are, our freedoms flourish. When they aren't -- power abhors a vacuum -- the temptation of tyranny arises.