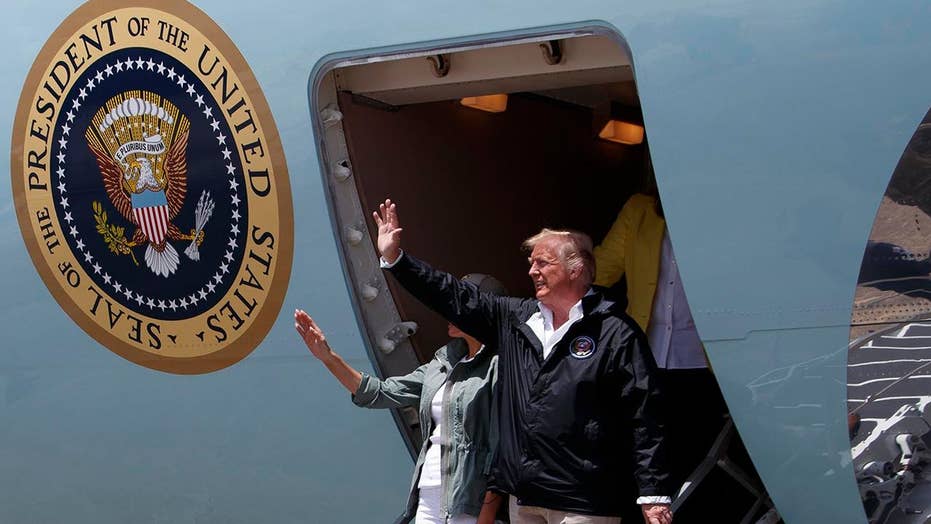 The president met with federal first responders and local officials and joked that the twin storms had stretched federal dollars a little thin; John Roberts has the roundup for 'Special Report.'

The hurricane devastation is severe. What should the federal government do?

Give us lots of money, say many in the wounded states.

So far, Congress has agreed to $15 billion in hurricane relief. But more will come.

But let’s take a breath. Why is rebuilding the federal government’s responsibility?

This idea that the federal government must lead in rebuilding is only a recent phenomenon, says the Cato institute’s Chris Edwards. “Prior to recent decades,” he writes, “private charitable groups and businesses have been central to disaster response.”

Clearly only the federal government can send in the military and other first responders.  After Hurricane Harvey, FEMA housed 42,000 people in 692 shelters. After Hurricane Irma, 13,000 National Guard soldiers from 22 states helped rescue and evacuate people.   That’s the kind of emergency response we expect from the federal government. But rebuilding -- after the storms?

Washington has no money of its own. Anything it spends comes from states. But states and local governments know better than Washington how relief money might best be used.

(Puerto Rico may be an exception, since its government is, as one entrepreneur put it, “inept and riddled with corruption.”)

This idea that the federal government must lead in rebuilding is only a recent phenomenon, says the Cato institute’s Chris Edwards.

“Prior to recent decades,” he writes, “private charitable groups and businesses have been central to disaster response.”

In 1906, the massive San Francisco earthquake and fire that followed destroyed 80 percent of the city. Yet that tragedy “is remembered not just for the terrible destruction it caused, but also for the remarkably rapid rebuilding … (The) population recovered to pre-quake levels within just three years, and residents quickly rebuilt about 20,000 buildings.”

The rebuilding was quick because it wasn’t done by a cumbersome government bureaucracy. Rich people and companies donated labor and goods. “Johnson and Johnson quickly loaded rail cars full of donated medical supplies and sent them to San Francisco,” writes Edwards.

Today in America, even people who live on the edges of oceans don’t buy insurance. “Why pay?” many reason. “There probably won’t be a problem, and if there is, government will step in.”

The more the federal government intervenes -- the more people come to rely on handouts.

When government’s not in charge, people innovate.

When the San Francisco Earthquake hit, banks failed, but that provided opportunities. One banker “opened for business on a wharf on San Francisco Bay. His rapid response and willingness to provide loans to all types of people after the disaster helped him gain the respect of the city,” writes Edwards.  His bank grew to be one of America’s biggest, the Bank of America.

One of the hardest hit cities was Dayton, Ohio. “Fortunately for Dayton,” writes Edwards, “it was home to the National Cash Register Company… NCR built 300 boats to rescue flood victims, organized search teams, and provided meals and shelter for thousands of people.”

The role of businesses after disasters is seldom appreciated. Yes, businesses want profit, but local workers also want to help neighbors, and every business wants a good reputation.

“Wal-Mart delivered truckloads of supplies … almost immediately after the storm passed, rather than in the days -- in some cases weeks -- it took government agencies to provide relief. The fundamental reason for such superior performance is that private ownership and the price system give competitive firms stronger incentives and better information on which to act quickly and flexibly.””

After Hurricane Katrina flooded the New Orleans Holy Ground Baptist Church, its pastor tried to repair it, but city bureaucrats wouldn’t grant him a permit. While he appealed the permit ruling, the city tore down his church by mistake.

Some charities employ specialists to fight the bureaucracy. In New Orleans, Habitat for Humanity built 70 homes -- quickly. Even Mayor Nagin admitted that charities did what his government didn’t.

“Private sector does it better and quicker,” Nagin told me. “Not a lot of rules and regulations.”

Nagin, like other politicians before him, used government’s rules to enrich himself. Now he’s in jail for taking bribes.

Some people even specialize in post-disaster fraud. Investigators call them “disaster-chasers.”

By contrast, in the aftermath of that horrible 1913 flood in the Midwest, many storm victims “refused disaster relief, to the point of hiding from aid workers,” writes historian Trudy Bell.  Even mayors turned away outside aid, and would then “boast that they had refused it.” Why? “Because cultural norms against being seen as accepting charity were more powerful than the physical imperatives of health, welfare and recovery.”

Those norms have changed. Today few people reject handouts. Your neighbors may call you a sucker if you do.

But many government handouts cause more problems than they solve.

The Federal Emergency Management Agency says it will “rush recovery money” to National Flood Insurance Program policyholders. That may sound like a good thing, but it creates incentives that will cause more problems during the next flood.

I know that because I was one of those policyholders once.

I built a house on the edge of the ocean. Without National Flood Insurance’s encouragement, I would never have built there. But the Flood Insurance Program offers cheap insurance, so I did build.

A few years later, the ocean took my first floor. Government paid for me to rebuild. Later, my whole house washed away and government reimbursed me again. Thanks, taxpayers!  I won’t rip you off again, but others will.

Millions of people hold federal flood insurance. The program was $25 billion in debt even before this year’s hurricanes.

Such government “help” creates a moral hazard. It encourages people to take foolish risks because someone else will bear the cost.

Another post-hurricane handout from Congress is a $7 billion grant to HUD’s Community Development Fund.

“Community Development” sounds nice, but HUD has squandered hundreds of millions of dollars. HUD bureaucrats often give money to sketchy developers who just vanish. “A pattern of HUD projects stalled or abandoned,” The Washington Post reports, that “in at least 55 cases, developers drew HUD money but left behind only barren lots.”

Federal bureaucrats are the last people who ought to fund rebuilding.

As Daniel Rothschild of the Mercatus Center puts it, "Unfortunately, the scale of major disasters leads many people to conclude that only governments have the resources to deal with the aftermath. This could not be further from the truth. What makes sustainable rebound possible is the rebuilding of communities and the organizations that support them: businesses, civic groups, religious communities and nonprofits.”