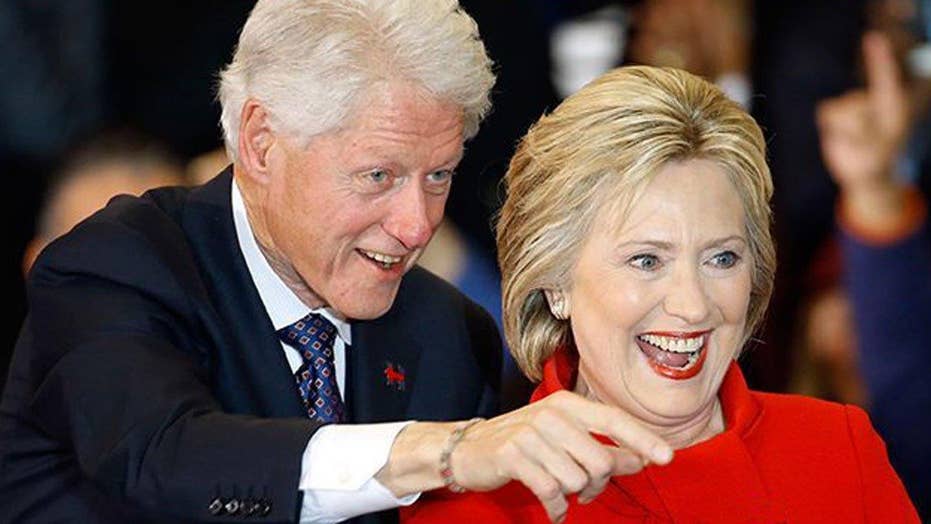 This week, as Democrats fawn over Hillary Clinton, I'm struck by how both Clintons continue to thrive despite their remarkable record of sleazy dealings.

The just released documentary "Clinton Cash," based on a book by Peter Schweizer, explains how they make big money by selling access to themselves.

On my TV show, Schweizer said the Clintons use "speaking fees" to get around bribery laws.

"If somebody gave a politician or family member money for a favor, that's breaking the law. But if you say it's a speaking fee, and you pay double or triple the normal rate, that seems to be legal."

Since Bill Clinton left office, he's earned more than $126 million giving speeches. Nothing wrong with that. Bill likes to talk, and if people want to pay big bucks to hear him or just to say they were near him, so be it. It's their own money.

That's "evidence that people paying him expect to get something in return," says Schweizer. "She becomes appointed secretary of state, a friend of the president of Nigeria suddenly offers (Bill) $700,000 apiece for two speeches. An investment firm in Moscow that's tied to the Kremlin who had never paid for him to speak before suddenly gave him $500,000."

Those are just two of many examples cited in "Clinton Cash."

Sometimes the Clintons launder the money through the Clinton Foundation. It's collected more than $2 billion to "improve global health and wellness."

But Sean Davis of The Federalist examined Clinton Foundation records and concluded only about 15 percent of the money goes to actual charity work to help needy people.

Even the earthquake in Haiti became a moneymaking opportunity for the Clintons.

After the earthquake, the Clinton Foundation announced that it would work with governments and businesses to help rebuild Haiti. Actual rebuilding has been meager.

A Clinton Foundation press release promised an industrial park that would create "up to 60,000 jobs." Just 7,000 jobs have been created.

What the Foundation has managed to do is help Clinton "friends." One, Irish billionaire Denis O'Brien, runs Digicel, a company that wanted a grant to build Haiti's cellphone network.

"Four weeks after their application," says Schweizer, Digicel sponsored a speech for Bill Clinton in Jamaica and "paid him $225,000. Within four months of that speech, Digicel would receive the first installment of that grant money."

The Clintons will tell you that it had nothing to do with the facts that Hillary's brother got a job with VCS and the chairman happens to be a Democratic donor.

The worst example in "Clinton Cash," says Schweizer, is the Ericsson telecom deal. The Swedish company Ericsson was in trouble with the State Department because it sold telecom equipment to repressive regimes.

Says Schweizer, "WikiLeaks cables show the State Department sort of busting up the Swedish foreign minister, saying you need to get Ericsson into line. Ericsson decides that this would be a great time to sponsor a speech by Bill Clinton. They had never done so before. They decided to go big, $750,000 for a 20-minute speech. Bill gives the speech and literally seven days later, the State Department comes out with a statement saying we're not going to take further action against Ericsson. We're going to ask them to police themselves."

Hillary Clinton would like you to believe that electing a woman (Electionbettingodds.com shows she is favored 67 percent to 32 percent) means you've picked an "outsider" who will put a stop to Washington favoritism. Don't believe it.

I hope "Clinton Cash" gets the attention it deserves.