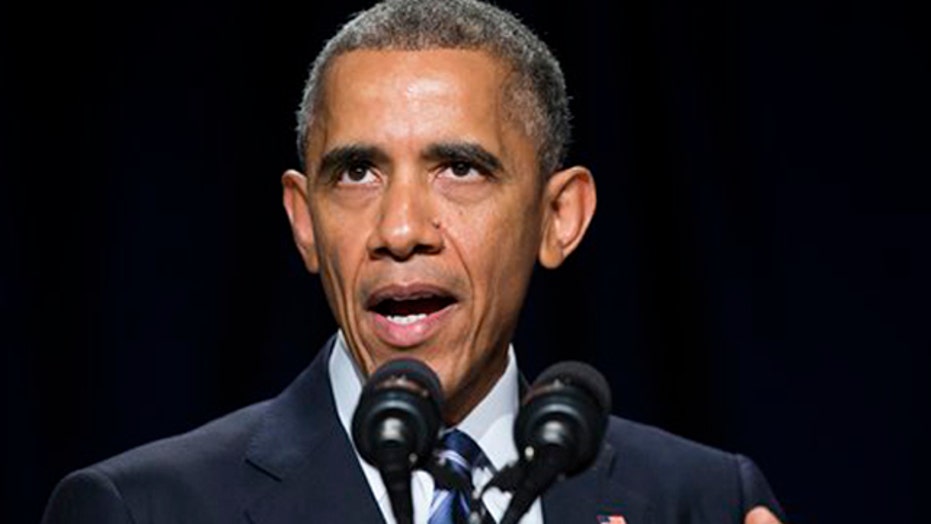 Here’s a pop quiz. Who recently said: “How many murders have been committed in the name of religion? Ever hear of the Inquisition or the Crusades?”

If you answered "Barack Obama," you are close, but not exactly right.

Very few terrorist murders are carried out these days by fanatics screaming “Christ is Great!” in a Romance language.

The president did say something similar last week at the National Prayer Breakfast. We’ll get to that in a minute. But this particular indignant rhetorical query comes from a book published weeks before the prayer event, in an autobiography by ex-con and noted moral philosopher John Gotti Junior.

Very few terrorist murders are carried out these days by fanatics screaming “Christ is Great!” in a Romance language.

The autobiography is titled "Shadow of My Father" (not to be confused with Obama’s memoir, "Dreams from My Father"). The father in this case is the late John Gotti, aka the Teflon Don.

For those with short memories, John Gotti Senior was the leader of the Gambino Crime Family, the biggest Cosa Nostra outfit in the country in the 1980’s and early 90’s. He was a vain, handsome swashbuckler who wore $2,000 Brioni suits, had his hair styled every day and never missed an opportunity to see himself on the front page of the tabloids or the six o’clock news.

Eventually his notoriety, and the RICO laws, caught up with him. He was convicted of committing five murders and conspiring to commit others, racketeering, obstruction of justice, illegal gambling, extortion, tax evasion and loansharking. He spent his last years dying of cancer in a federal prison.

Gotti raised his son, John Jr, to be a mobster. The boy was a criminal prodigy, a made man in Gambino Family by his early twenties. In his book, he readily admits that he was a thug and a thief and a lieutenant to his father. He spent many years in prison on various charges and his book is a chronicle of how he eventually saw the light, quit the Life and became a law abiding citizen.

At the same time, Junior continues to see his father as a heroic figure. He doesn’t deny that the Teflon Dan had his faults. He admits that the old man was a career criminal who killed his enemies in cold blood and ran his illegal enterprises with a brutal hand. It is even possible, he concedes, that Gotti Senior had a neighbor murdered after the man accidently ran over and killed one of the don’s favorite children.

Despite these character flaws, Junior is in awe of his father. He sees him as “a man’s man” and “a mobster’s mobster,” a guy who didn’t rat or cooperate with the cops, a true don who was unwaveringly faithful to his personal creed and the values of his Mafia community.

Gotti died behind bars. Naturally his family wanted to give him a proper send-off, including a proper Catholic Mass of burial. But Father Andrew Vaccari, the chancellor of the Diocese of Brooklyn, said no.

This decision infuriated Junior and inspired his bitter diatribe against the Church. And, of course, he had a point.

King Richard of England committed untold atrocities under the banner of the cross on the way to the Holy Land and history remembers him as “the Lionheart.”

Torquemada, the bloody Spanish High Inquisitor, was the scourge of Jews and heretics, and he was appointed to the job by the Pope himself. So where, demanded Junior, does the Church get off being holier-than-thou?

Obama made the same point in almost the same words at the National Prayer Breakfast. The president was not protesting the post mortem treatment of John Gotti, of course. He was defending the good name of Islam from people who think that the current jihad is an unprecedented holy war. He reminded his mostly Christian audience that they, too, were guilty by historical association. “Remember that during the Crusades and the Inquisition, people committed terrible deeds in the name of Christ,” he said.

I don’t want to accuse the president and his speechwriters of cribbing from Junior Gotti’s autobiography. Probably this is just a case of great minds thinking alike. And there is no doubt that Obama and Gotti are both right about the Crusades and the Inquisition. Hell, my ancestors were two-time losers. But that was a quite a while ago. Very few terrorist murders are carried out these days by fanatics screaming “Christ is Great!” in a Romance language.

I get why John Gotti Junior went all the way back to the middle ages to find depredations great enough to smear the Church with the charge of hypocrisy. It was his own father who was denied burial, after all. The don was a bum, but it is easy to understand why a son would resort to an absurd everybody-does-it alibi to defend him.