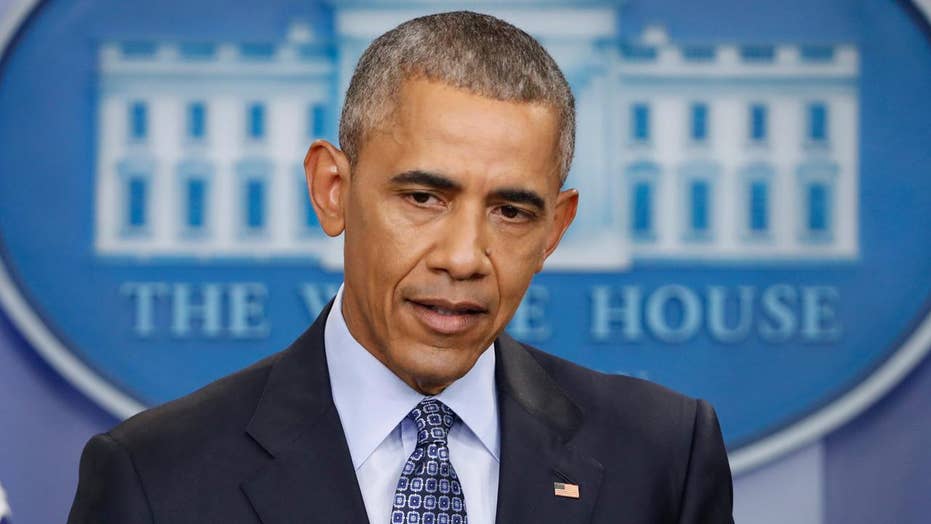 Obama to the press: Our democracy needs you

President Obama addresses reporters for the last time in office

Most presidents wait until the corner stone is laid for their presidential libraries before they really try to airbrush their mistakes, errors and scandals out of history. But President Obama is already into full revisionism. He told CBS’ “60 Minutes” last Sunday that “we are probably the first administration in modern history that hasn't had a major scandal in the White House." His chief of staff, Denis McDonough says he’s “most proud of” is that Obama’s tenure has ben ‘historically free of scandal.”

Every administration engages in political spin, but this is political fantasy. For starters, this president and his minions have twisted, bent, and distorted the Constitution, engaging in unilateral actions that ignored, changed or rewrote federal law as if he was a potentate with a “pen and a phone,” not the executive of a constitutional republic.  Obama has, in fact, presided over some of the worst scandals of any president in recent decades. Just a quick overview reveals a collection of truly “deplorable” events”

Operation Fast & Furious, the most reckless law enforcement operation ever conducted by the Justice Department that supplied dangerous Mexican drug cartels with over 2,000 weapons? Perhaps he should talk to the family of U.S. Border Patrol agent Brian Terry or the families of the many Mexican citizens who have been killed with weapons obtained through that program.  He even claimed executive privilege to cover up this scandal and obstruct a congressional investigation, an investigation that resulted in Attorney General Eric Holder being held in contempt of Congress for refusing to turn over documents about the operation.

In behavior even Richard Nixon didn’t get away with, President Obama’s IRS flagged tax-exempt applications from conservative groups. Some were never acted on, some were put through intrusive and improper questioning and others weren’t approved. All of this may have resulted in “suppressing”  Tea Party groups enough to secure Obama’s narrow 2012 election.

But no one was punished for abusing the power of one of the most feared executive agencies. No criminal prosecution was undertaken and his Justice Department even refused to enforce the contempt citation issued by Congress against Lois Lerner, one of the main culprits at the IRS, for her refusal to answer questions about the scandal.

The Obama administration has also dodged persistent questions about the 2012 Benghazi terrorist attack that cost the lives of four Americans, including Ambassador Chris Stevens. What is known is that the State Department ignored persistent requests for more security from the Benghazi consulate and did nothing to assist its occupants for hours after the attack began. In its coverup attempt, the administration peddled a false narrative about the motive for the attack just before the 2012 election while knowing it was false.

We still don’t know the full story of the secret mission Ambassador Stevens was in Benghazi for.

Perhaps President Obama presided over the biggest data breach in the federal government’s history, a data invastion by reputed Chinese hackers at the Office of Personnel Management.

This hack exposed the personnel files of millions of current and former federal employees and may end up being used for everything from identity fraud to blackmail and espionage.

The director of OPM, Katherine Archuleta, the president’s former 2012 political director, had been warned repeatedly about the deficiencies in OPM’s IT program but did nothing to fix them. -- Kind of like the president’s refusal to take any steps against the aggressive actions of Vladimir Putin until Russia may have finally done something that really went too far –exposing what the DNC and the Clinton campaign were doing behind the scenes in the 2016 presidential election.

One reason ObamaCare may be repealed in disgust is how Obama has revised the law dozens of times without consulting Congress.

The law was treated like a blackboard, with Obama erasing or delaying parts he didn’t like without consulting Congress in order to keep the program on life support.

That kind of lawlessness was accompanied by a lack of transparency so severe that in 2014, 47 of Obama’s 73 hand-picked Inspector Generals signed an open letter decrying the administration’s stonewalling of their investigations.

One reason for Obama’s penchant for secrecy was his habit of breaking rules. Those ranged from not informing Congress of the dubious prisoner swap involving Sergeant Bowe Bergdahl and the linking of the release of four Americans by Iran with the cash payment of $400 million delivered on pallets. Despite warnings not to so, Obama ordered the release of at  least 12 hardened terrorists from Guantanamo who have since returned to terrorist ranks and sought to kill Americans.

It seems every cabinet department has had its own mega-scandal -- from the secret death lists and phony status reports compiled by Veterans Affairs to the “green scam” boondoggles of the Energy Department to the Agriculture Department’s payouts to fictitious farmers in the Pigford scandal.

The claims by Obama and his aides that there have been no scandals on his watch is so delusional it makes  wonder whether they and the president, who will remain titular head of the Democratic Party, will install Sergeant “I know nothing” Schultz of “Hogan’s Heroes” as their new spokesman.

Obama’s media allies are amplifying and repeating the “no scandal” myth.

NBC’s Tom Brokaw gushed after Obama’s farewell address last Tuesday that “He’s been scandal free, frankly, in the White House. We haven’t had that for a while.”

Some of Brokaw’s media allies would take issue with him. Obama’s administration fought tooth and nail to block valid Freedom of Information Act requests from reporters. Then, as Kevin Williamson of National Review notes, “under the flimsiest of national-security pretexts, the Obama administration used the Department of Justice to spy on Fox News reporter James Rosen. It also spied on the Associated Press.”

But no matter how much help Obama gets from his media allies, I doubt he’ll be able to airbrush away scandals that have cost taxpayers billion, resulted in lost lives and have damaged our nation in ways we don’t yet fully comprehend.

History has a way of eventually outrunning political spin.