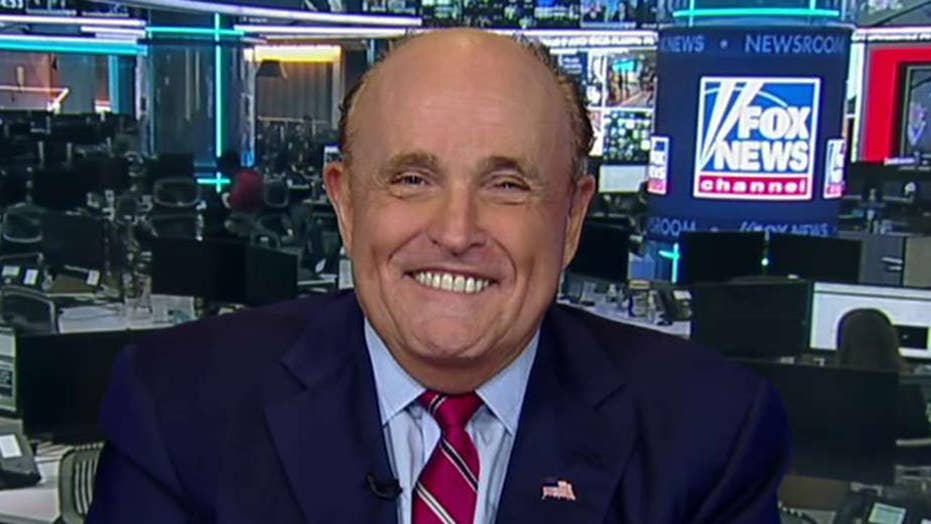 Giuliani: If Comey knew Steele wasn't reliable, then he is guilty

Trump's personal attorney Rudy Giuliani weighs in on abuses that led to the Mueller probe on 'The Ingraham Angle.'

Democrats must be scared stiff by reports Tuesday that federal investigators will soon interview former British spy Christopher Steele, whose discredited dossier was integral to getting the Russia collusion witch hunt started.

The interview with Steele is likely to reveal the stench of corruption that emanates from what amounts to an attempted Democratic coup against President Trump.

Steele could be the key to exposing the whole corrupt cabal that conspired to undermine then-candidate and later President Trump with wildly false allegations that culminated in the appointment of Special Counsel Robert Mueller.

After nearly two years of a massive investigation, Mueller was unable to substantiate the salacious claims Steele made in the dossier, which was proven to be bought and paid for by the Hillary Clinton presidential campaign.

This should have come as no surprise to the FBI, since agents were well aware that the document was thoroughly political in nature when they used it as the basis for a series of Foreign Intelligence Surveillance Act (FISA) warrants to spy on former Trump campaign adviser Carter Page – not once, but four times.

If Steele’s knowledge about the Democratic Party’s fraudulent and treasonous behavior becomes public, Democrats know that Trump will be virtually assured of winning re-election.

Justice Department Inspector General Michael Horowitz is already looking into whether the FBI violated any laws in its handling of the FISA warrants.

And now Attorney General William Barr’s investigators are hot on the trail of former FBI Director James Comey, former CIA Director John Brennan, former Director of National Intelligence James Clapper, and others who played a role in concocting the conspiracy to take down our duly elected president.

If investigators conclude that Comey, Clapper and others engaged in a criminal conspiracy – as seems increasingly likely – then Christopher Steele could easily be named as a co-defendant, which would trigger an extradition request that Britain would almost certainly honor.

Steele obviously doesn’t want that to happen, which is probably why he declined a previous request for cooperation from U.S. Attorney John Durham, one of Barr’s top investigators looking into the FISA warrants scandal.

We don’t yet know which investigators will be interviewing Steele in the coming weeks, but it’s a pretty safe bet that they’ve offered him some form of immunity in exchange for his candor. That should terrify the Democrats who enlisted him in their attempts to execute a Deep State coup against Trump.

If Steele spills the beans on his former handlers, the resulting prosecutions of former high-level federal officials would make Watergate seem trivial by comparison.

In addition to Comey, Clapper and Brennan, it’s entirely possible that Steele’s testimony will yield new insights that could eventually help to implicate even higher-ranking officials in the Obama administration.

Of course, even if famously aloof former President Barack Obama is able to maintain plausible deniability and keep investigators from proving that he knew of the Deep State effort to overturn the results of the 2016 election, the Democratic Party would deserve to be politically and electorally devastated by the revelation that some of its most prominent members engaged in such an illegal and anti-democratic scheme.

That’s why Democrats who weren’t even directly involved in the plot against Trump should be just as apprehensive about Steele’s interview. They are now looking to the 2020 election as their final chance for defeating Trump, after Mueller deflated their hopes of removing the president from office early.

If Steele’s knowledge about the Democratic Party’s fraudulent and treasonous behavior becomes public, Democrats know that Trump will be virtually assured of winning re-election.

The bell is tolling for the corrupt Democratic Party. The upcoming Steele interview proves that Attorney General Barr’s investigators are closing in on the creators of the collusion hoax, and that should absolutely terrify every Democrat planning to run for office in 2020. as the stench of corruption is revealed and seeps into the political campaign season in earnest.