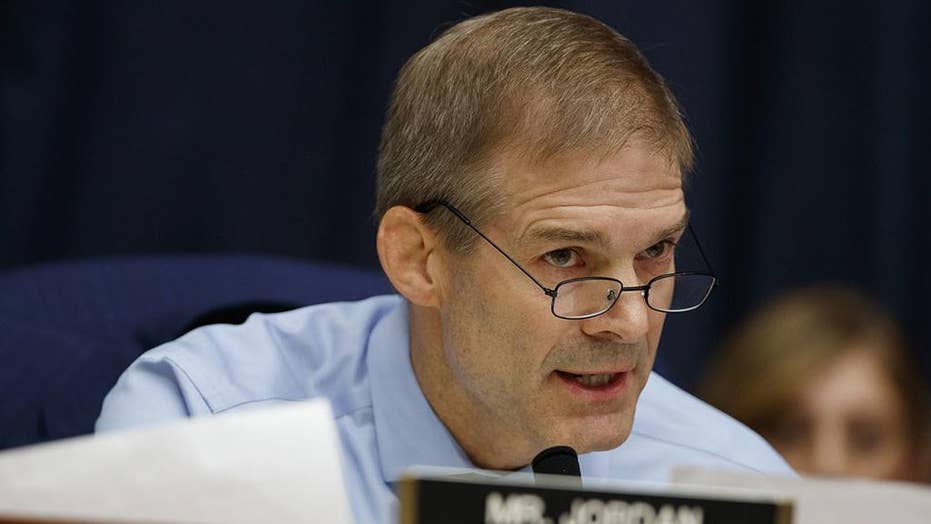 Rep. Jim Jordan to seek speakership in the new Congress

Freedom Caucus co-founder announces campaign for Speaker of the House.

Rep. Jim Jordan, R-Ohio, officially entered the race Thursday to become the next speaker of the U.S. House of Representatives. Now we can sit back and watch political pundits argue in circles over whether he has a legitimate path to become speaker if Republicans retain majority control of the House after the Nov. 6 midterm elections.

The truth is, no Republican running in any race this year has a path to victory right now. The Republican Party has an enthusiasm problem, and current leadership is to blame.

Voters were promised a GOP majority that would advance small government, spending cuts and free enterprise. Speaker Paul Ryan, R-Wis., who is not seeking re-election, worked with President Trump to pass the historic Tax Cuts and Jobs Act – but failed to follow up with corresponding spending cuts.

Instead, Republican leadership forced through approval of a $1.3 trillion spending spree that sent the federal government on a path to trillion-dollar deficits as early as 2020. And the GOP leadership did so without giving colleagues enough time to read the legislation before voting.

Grassroots America was furious, but did leadership care? Not really. They immediately pivoted to a Balanced Budget Amendment “show-vote” that was unlikely to pass but designed to appease GOP voters on the campaign trail. It was a slap in the face of every pro-liberty grassroots activist in the country.

With control of the House, Senate and White House, there is no excuse for GOP leadership to constantly take two steps forward, one step back when it comes to keeping campaign promises. Speaker Ryan started the job of draining the swamp. It’s time to let Rep. Jim Jordan finish it.

Jordan is running on a pro-liberty platform that tackles five big issues, including: welfare reform, spending cuts, ObamaCare repeal, reforming the FBI, and taking meaningful action on the border.

Jordan is well-liked by colleagues because he’s principled. He consistently makes the hard votes when it comes to cutting spending, shrinking government, and returning Congress to regular order.

Jordan sees the dysfunction in Congress and wants to fix it. Current leadership operates in secrecy, making huge decisions behind closed doors and leaving congressional Republicans in the dark.

A Jim Jordan speakership would bring the legislative process into the sunlight, empowering his colleagues (and the constituents they represent) to have a real voice in the GOP congressional agenda.

Historically, every candidate for Republican leadership promises to increase transparency. Grassroots America genuinely believes Jordan will do it.

This speakership race draws a line in the sand, forcing Republican incumbents to put their commitment to pro-liberty values on the record. A vote for Jordan is a vote for transparency and fiscal responsibility. A vote for Rep. Kevin McCarthy, R-Calif., is a vote for more of the same.

If Republicans want to see high turnout in November they must give voters a reason to show up, and empty rhetoric just isn’t going to cut it anymore. A Jim Jordan speakership would be a sign of good faith to the fiscally conservative base of the GOP that the Republican majority is finally ready to start keeping their promises.

Jordan just gave the GOP base the rallying cry it so desperately needed: Vote Jordan for speaker, or I’m staying home.

If House Republicans truly believe in the five policy issues governing Jordan’s speakership bid they should vote for him. They shouldn’t just tell constituents they support spending cuts and regular order from the safety of the podium, but then abandon those principles before the door closes on the campaign bus.

Republicans cannot win in 2018 without engaging the party’s most active voting bloc – fiscal conservatives. And when Republicans start voting like Democrats, these dedicated voters skip the polls and go to a movie instead.

This speakership battle is so much bigger than inside baseball. We are witnessing a political realignment, where voters nationwide are putting ideas first and no longer passively voting the party line.

The country is split just about evenly across the political spectrum. Whoever motivates enough citizens to get their party to 55 percent of the electorate could control American politics for the next generation.

Rep. Jim Jordan is ready to inspire the American electorate and restore faith in the legislative process. He is prepared to make Congress work again.

For Republicans looking to get re-elected in November, the only legitimate path to victory is to embrace the candidate who wants substantive change as badly as their own voters do.