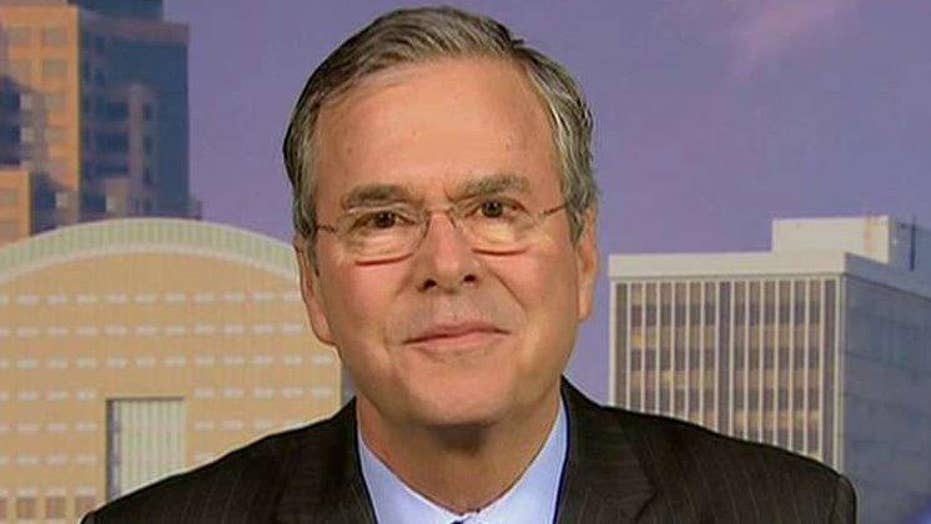 Jeb Bush on new polls, report his donors are worried

ISIS’ barbaric attacks in Paris and elsewhere have once again called the world’s attention to our generational struggle against radical Islamic terrorism. A threat this administration has ignored as it has grown on their watch.

One place where their inaction and lack of moral clarity in this fight has been particularly stark has been in relation to our closest ally in the Middle East, Israel.

Israeli citizens have for decades lived with the daily threat of terror on their doorstep, in their communities, and when they travel abroad.  Today, while old enemies like Hezbollah and Hamas continue to threaten Israel, the Jewish state has also seen a new threat emerge inside its borders.  A string of stabbings, hit-and-runs, and shootings of innocents whose only crime was being Jewish is but the latest form of anti-Israeli terror.

This recent surge in violence has left Israeli citizens vulnerable in their everyday life, and cries out for allies who understand how disruptive such a threat could be.

As president, I will restore resolve, consistency, and moral clarity to America’s efforts to combat terrorism.

Israel has faced radical Shiite terrorists, such as during the 2006 war with Hezbollah, when the Iranian-backed terrorist group rained thousands of rockets on the northern part of the country.

Since then, Iran and Syria have re-armed Hezbollah with more than a hundred thousand rockets, including longer-range sophisticated weapons that can hit Tel Aviv and Jerusalem. Hezbollah has also plotted to slaughter innocent Jews around the world, including in Latin America, Africa, and Europe.

Israel has also faced radical Sunni terrorism, such as Hamas’ campaign of terror, which at times has included daily rocket strikes against civilian areas, bombings, and other attacks against Israel.

Such horrific exploitation of innocents in the promotion of terror reminds us there can be no moral equivalence between Palestinian terrorism and Israel’s efforts to defend itself against it.

In addition to a disturbing trend of anti-Semitism in Europe and even on university campuses in the United States, Israel also faces a concerted international effort to delegitimize it.  The “boycott, divestment, sanctions” (BDS) movement is but one manifestation of this appalling anti-Israel effort and as president I will fight and rebuke it.

Given the deep historic, cultural, and emotional ties that bind the United States and Israel, as well as our shared interests in fighting the growing terrorist threat and combatting Iranian aggression, the U.S.-Israel relationship should be stronger than ever.

Yet under Obama, Clinton, and Kerry we have seen a tremendous erosion of this essential alliance. Obama and Clinton promised to always have Israel’s back, but they went behind Israel’s back in conducting secret negotiations with Iran.

The deal Obama reached with Iran ignores Iran’s support for terrorism and missile proliferation that directly threatens Israel, and has rewarded Iran with more than $100 billion to spend on its terrorist proxies.

The Obama administration has suggested the U.S. might withhold vetoes against anti-Israel resolutions at the UN.

As president, I will restore resolve, consistency, and moral clarity to America’s efforts to combat terrorism.

I will speak against the moral equivalence that criticizes just societies like Israel who defend themselves against terror.

I will hold Palestinian leaders accountable for official acts of incitement that honor terrorists, glorify violence, and teach children to hate.

I will actively combat Iran’s support for terrorism, and aggressively work to interdict and impose consequences for its provision of weapons and support to Hezbollah, Hamas, and Palestinian Islamic jihad.

I will rebuild the trust that has been badly eroded during this administration between the United States and Israel.

I will make clear that the pathway to peace requires an end to violence and the recognition of Israel as a Jewish state.

I will restore the trust that binds America's alliance with Israel, and send the world the unmistakable message that we stand as one in our common effort to defeat the enemies of civilization.

If we cannot stand with our ally Israel in the face of this terror, we cannot be relied on to lead the world in the name of free people any longer.

President Obama and Hillary Clinton have demonstrated they are not up to the task.

Jeb Bush was the Governor of Florida from 1999-2007 and is the current Chairman of the Foundation for Excellence in Education. Follow us on twitter.com/foxnewslatino
Like us at facebook.com/foxnewslatino