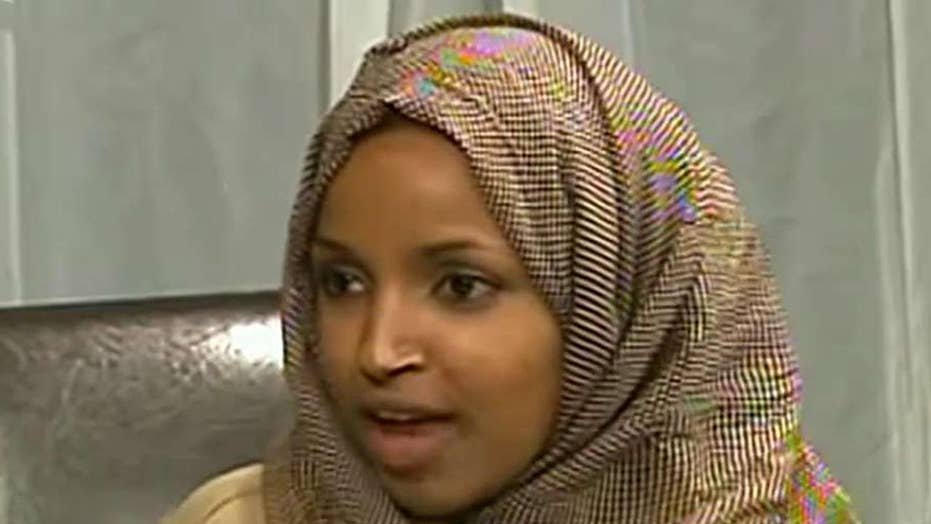 Rep. Ilhan Omar, D-Minn. – who has refused to apologize for past anti-Semitic remarks – introduced a resolution in the House this week supporting the right of people to participate in the anti-Semitic and anti-Israel Boycott, Divestment and Sanctions (BDS) movement.

Omar’s resolution opposes laws banning any boycott of Israel and supports the right of Americans to organize boycotts of other countries. Although the resolution doesn’t specifically name Israel, Omar has told reporters it is directed against the Jewish state.

This deeply flawed resolution deserves to go down to overwhelming bipartisan defeat for many reasons.

The BDS movement that Omar so warmly embraces is an international effort with the ultimate goal of delegitimizing Israel and disrupting its economic stability. It attempts to cause direct harm to the economic interests of people conducting business in and with Israel – or deemed to be affiliated with Israel.

BDS is, in effect, a declaration of economic warfare against Israel. It uses the threat of withholding business to coerce companies to cease or refuse to engage in business relations with the Jewish state, its nationals and its residents. Especially in its accompanying “cultural and academic boycotts,” BDS also often targets people who are Jewish or who do business with Jews.

And in an appalling insulting move, the text of the Omar resolution itself compares a boycott of the Jewish state today to boycotts of Nazi Germany – a nation that carried out the mass murder of 6 million Jews in the Holocaust.

In introducing the resolution, Omar actually equated Israel – the only true democracy in the Middle East and a close American ally – with Hamas, a designated Palestinian terrorist organization.

And in an appalling insulting move, the text of the Omar resolution itself compares a boycott of the Jewish state today to boycotts of Nazi Germany – a nation that carried out the mass murder of 6 million Jews in the Holocaust.

In addition, Omar’s resolution demonstrates a shocking lack of knowledge about the First Amendment of the U.S. Constitution and a fundamental lack of understanding about how anti-discrimination laws work.

Omar does not seem to have a problem expressing her virulent hatred of the state of Israel. As much as we disagree with her view, she has a First Amendment right to express her opinion.

But she should not be allowed to confuse the American people by hiding her opposition to the Jewish state in a misreading of our Constitution.

Omar’s description of the BDS movement is riddled with falsehoods. BDS is not “nonviolent,” as Omar claims. Support of BDS has been a significant factor in the recent trend of anti-Semitic incidents both globally and domestically.

With the unambiguous goal of eliminating the only Jewish state in the world, the BDS movement has been repeatedly and demonstrably linked to radical terrorist groups.

The legislative response to the BDS movement has not been – and should never be – a partisan issue. In their 2016 party platforms, both the Republican and Democratic Parties included language that disavowed BDS.

Many state legislatures have found BDS activity abhorrent and more than half have taken steps to distance themselves from supporting it through the passing of bipartisan anti-BDS legislation. These laws declare that the states will refuse to do business with those who engage in discriminatory business practices that are opposed to the state’s social and economic values.

This is the point about which many BDS proponents – including Omar – are attempting to muddy the waters in an effort to conceal their disdain for Israel behind the pretense that they have First Amendment concerns.

So let us be very clear:

None of the state laws dealing with BDS bans or punishes in any way speech that is critical of Israel. And none of these state laws stops anyone who desires to do so from boycotting Israel.

In the words of Professor Eugene Kontorovich, one of the experts behind anti-BDS bills, “these laws simply say: If you want the state to do business with you, you need to abide by the state’s policies of sound and fair business practices, including anti-discrimination rules.”

As Democratic Gov. Andrew M. Cuomo wrote shortly after he signed Executive Order No. 157 in New York, directing state entities to divest all public funds from entities supporting BDS: “as a matter of law, there is a fundamental difference between a state suppressing free speech and a state simply choosing how to spend its dollars. To argue otherwise would be to suggest that New York state is constitutionally obligated to support the BDS Movement, which is not only irrational but also has no basis in law.”

Consistent with such analysis, the Supreme Court has said that “when government speaks, it is not barred by the Free Speech Clause from determining the content of what it says.”

This means that the government is allowed to pick a side in a debate. And the Supreme Court has continually refused “to hold that the Government unconstitutionally discriminates on the basis of viewpoint when it chooses to fund a program dedicated to advance certain permissible goals, because the program in advancing those goals necessarily discourages alternative goals.”

This means that the government is allowed to say it does not support BDS, and it is not thereby discriminating against those who would like the government to support BDS. In fact, anti-BDS statutes exemplify the states’ right to take a moral position on an issue.

To summarize, anti-BDS bills do not violate the First Amendment because they relate only to government speech, not private speech.

If you’re curious, the general prohibition against these “secondary boycotts” (an attempt to influence the actions of one organization by exerting pressure on another entity) is taken directly from the National Labor Relations Act, and has been expressly upheld by the Supreme Court against a First Amendment challenge.

The language and purpose of the statutes closely tracks those of the Export Administration Act, and the nondiscrimination provision is virtually the same as that of Title VII, albeit in the context of commerce (as opposed to employment). In short, the anti-BDS bills are fully constitutional, supported by good law and solid policy.

Mark Goldfeder is special counsel at the American Center for Law and Justice and a member of President Trump’s legal team.