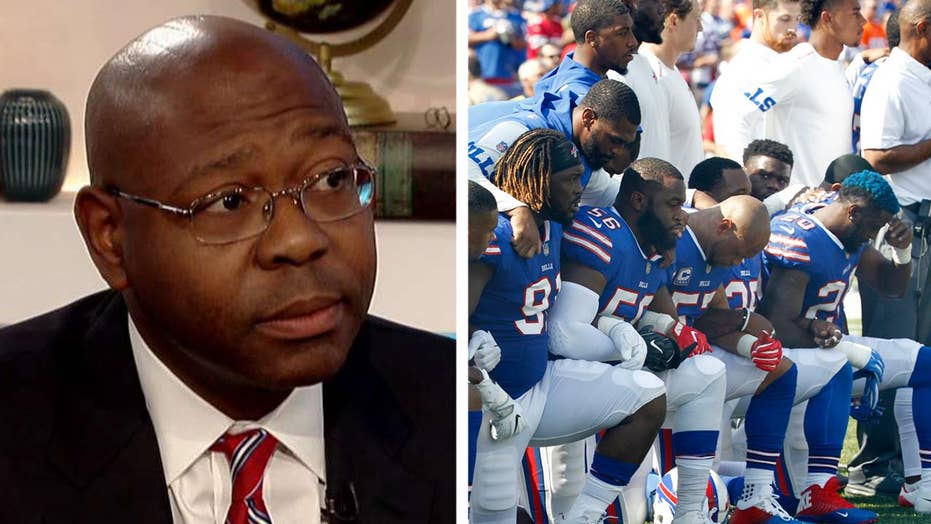 Jason Riley: I used to sit for the national anthem

As a youngster, I didn’t salute the flag or stand for the national anthem. It ran against my religious teachings.

Each year, my mother would take me to the principal’s office on the first day of school and explain that we were Jehovah’s Witnesses, which meant that I would remain silent while my classmates recited the Pledge of Allegiance every morning. When my father, who was divorced from my mother and not a member of the church, took me to sporting events, he stood for the national anthem while I sat. He never said anything to me about it. He respected my mother’s desire to raise her children in the faith of her choice.

Growing up, I was taught that the flag was an idol and that saluting it was a form of idolatry, which was forbidden. Indeed, all forms of patriotism were discouraged. No joining the military. No running for office. No voting or taking sides in political debates. Even membership in civic groups, such as the Boy Scouts, was frowned upon. Over the decades, Witnesses endured fierce opposition for holding such beliefs. They were tried for sedition. Their homes were vandalized and their businesses were boycotted. In the 1930s and ’40s, church members were physically attacked by angry mobs of people who prided themselves on their loyalty and patriotism. The Witnesses turned to courts for protection and were mostly successful in obtaining it, whether the issue was door-to-door proselytizing, conscientious objection to the draft, or mandatory flag salutes.

The reason the principal had to accede to my mother’s wishes is because the U.S. Supreme Court had ruled, in West Virginia State Board of Education v. Barnette (1943), that forcing children to salute the flag violated the Constitution. The court held that saluting the flag is a form of utterance and that the right to not speak is as equally protected under the First Amendment as the right to free speech. “The case is made difficult not because the principles of its decision are obscure but because the flag involved is our own,” wrote Justice Robert Jackson for the 6-3 majority. “Nevertheless, we apply the limitations of the Constitution with no fear that freedom to be intellectually and spiritually diverse or even contrary will disintegrate the social organization. To believe that patriotism will not flourish if patriotic ceremonies are voluntary and spontaneous instead of a compulsory routine is to make an unflattering estimate of the appeal of our institutions to free minds.” The decision was handed down on Flag Day.

To continue reading this column from the Wall Street Journal, click here.

Jason Riley is a Fox News contributor and a member of The Wall Street Journal Editorial Board.