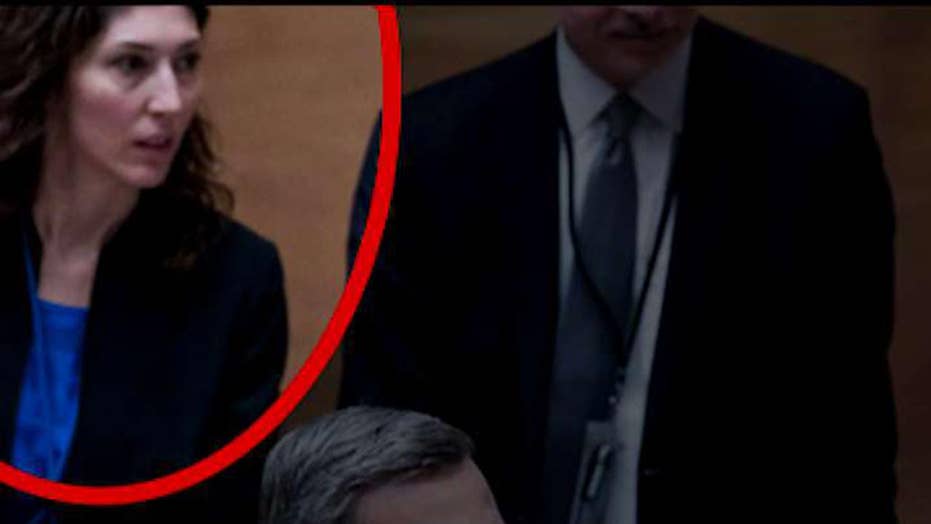 A key figure in the investigation into anti-Trump bias at the Justice Department is refusing to talk to lawmakers; chief intelligence correspondent Catherine Herridge reports.

Public attention was focused Thursday on FBI official Peter Strzok’s televised testimony before two House committees regarding his anti-Trump texts while he was investigating Russian interference in the 2016 presidential race. But the decision by a former FBI lawyer who was Strzok’s lover to defy a subpoena to give a closed-door deposition to the same committees Wednesday was getting far less attention than it deserved.

Former FBI lawyer Lisa Page’s action shows that the deliberate destruction of congressional subpoena power is complete and reveals the impotence of Congress to compel evidence. As a result, the ability of Congress to perform substantive oversight is compromised. Only when she was threatened with contempt of Congress proceedings did Page agree to voluntarily appear for a private interview on Friday, Rep. Bob Goodlatte, R-Va., said Thursday.

Page may yet testify at a public hearing before Congress. But why does she or any other government witnesses get to dictate the terms and timing of their own testimony?  How many of us who are not federal employees would dare refuse a subpoena from Congress? How many of us would even get away with it?

As I explain in my forthcoming book, “The Deep State,” Attorney General Jeff Sessions’ inexplicable failure to prosecute subversions of congressional authority played no small role in my decision to resign from Congress and the House Oversight Committee last year. I knew what harm the attorney general’s wrong decision would cost Congress and the public.

Anyone could have seen this coming. The moment Jeff Sessions told me he had no intention of prosecuting Hillary Clinton IT aide Bryan Pagliano regarding her email scandal, I knew the battle was lost.

Anyone could have seen this coming. The moment Jeff Sessions told me he had no intention of prosecuting Hillary Clinton IT aide Bryan Pagliano regarding her email scandal, I knew the battle was lost. Pagliano, you’ll recall, refused to even appear before Congress – not once, but twice. In my role as chairman of the House Oversight Committee, I sent a letter to Sessions in February 2017 recommending prosecution for Pagliano for refusing to comply with a subpoena from the committee.

Up until that point, congressional subpoenas had not been optional except in cases of executive privilege. That’s why Attorney General Eric Holder, who served under President Obama, tried to use an executive privilege claim to protect documents in the investigation of the Fast and Furious scandal.

Fast and Furious was an operation conducted during the Obama administration by the Bureau of Alcohol, Tobacco, Firearms and Explosives (ATF) that allowed criminals to buy guns from stores in the Phoenix area. ATF planned to track the guns as they were taken to Mexico to be sold illegally there, but the federal agency lost track of more than 1,400 of the 2,000 guns it allowed the criminal gun smugglers to buy.

Tragically, U.S. Border Patrol agent Brian Terry was killed in a gunfight in 2010 by a member of a criminal gang armed with one of the guns smuggled during the botched Fast and Furious operation

When Holder used the executive privilege excuse to hide the facts about Fast and Furious from the House committee that I chaired, he did so because it was the only way to subvert congressional authority.

But thanks to Attorney General Sessions, it’s now a lot easier to flout a congressional subpoena. Now that Page has gotten away with ignoring a subpoena from Congress, other witnesses will follow suit, confident that the Sessions Justice Department will have their backs.

I have argued that both parties would rue the day we stood by passively while Sessions essentially destroyed our ability to provide meaningful oversight. Democrats may have cheered the move when it shielded Hillary Clinton. But what happens when they want to see documents or hear from a witness? Both sides lost when the attorney general refused to do his job.

It actually started in 1857, when Congress inadvertently weakened a check and balance in an effort to strengthen it. Congress passed legislation allowing those found in contempt of Congress to be held criminally liable. That was a good move. But then Congress made a big mistake by agreeing to give the Justice Department – rather than Congress itself – the power to enforce the provision.

The system of relying on the Justice Department worked for more than 100 years. The threat of criminal liability was sufficient to obtain compliance for a time. But there was always a weakness in this system – a possibility that the Justice Department could consider its enforcement responsibilities optional, thereby depriving Congress of a critical tool.

In 1982, the Justice Department for the first time decided to exercise its own discretion. The attorney general chose not to prosecute a Reagan Cabinet official who refused to cooperate with Congress. Environmental Protection Agency Administrator Ann Gorsuch, mother of Supreme Court Justice Neil Gorsuch, was able to claim executive privilege. The Justice Department recognized the claim, even though Congress did not.

That would have been the time to correct this structural weakness. But Congress didn’t do it. Instead, the Justice Department essentially created a new carve-out – from that point forward, Congress could not compel disclosure of privileged information.

Pagliano had no such argument. His work on an illegal secret server in Hillary Clinton’s New York residence had no claim to executive privilege. He was required to testify. He could have shown up and pleaded his Fifth Amendment right against self-incrimination. But he didn’t do that. He simply snubbed Congress. Twice.

Then-Attorney General Loretta Lynch, of course, did nothing. But with the surprise election of President Trump – a non-establishment Republican candidate who ran on draining the swamp – I expected something different. I was disappointed. Sessions had zero interest in draining the swamp. I warned him that this witness had snubbed Congress with impunity.

Now everyone can snub Congress, because Jeff Sessions refused to see the bigger picture. He can’t say he didn’t know. I applied heavy pressure. I told him exactly what was at stake. He made the wrong choice. Now America will pay for it. Getting to the truth just got harder.