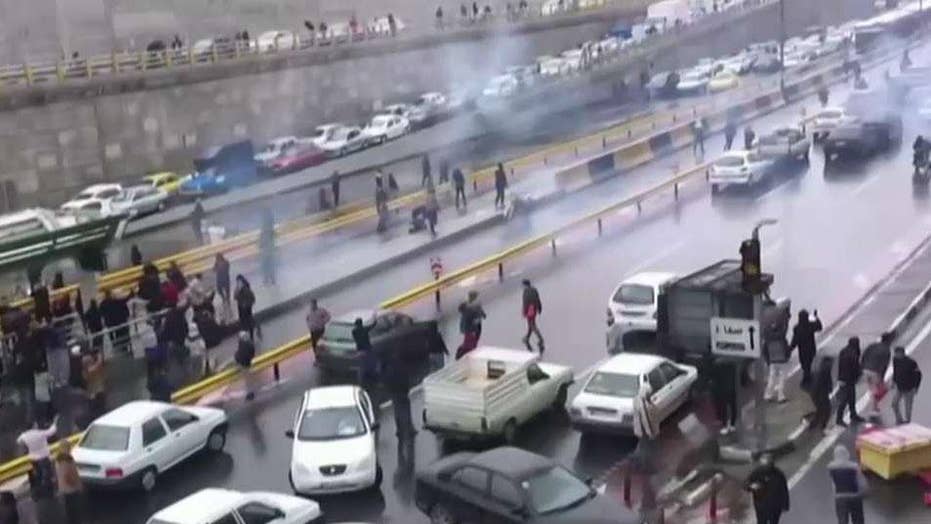 Iran's Revolutionary Guard warns there will be 'decisive' action if the unrest continues; Benjamin Hall reports.

No matter what you think about Donald Trump, you’ve got to admit he has made life miserable for the odious regime in Iran.

That’s not a bad thing. Nor can the mullahs reasonably expect their miseries to end anytime soon — at least, not if they’ve been paying attention to the administration’s policy toward North Korea.

For decades, the Iranian regime has exported extremism, mayhem and chaos throughout the Middle East. Now it’s facing a tremendous backlash across the region — with the worst of it coming from its own backyard. A wave of protests last weekend, sparked by the regime’s decision to reduce state subsidies on gasoline, turned violent. Amnesty International reports that the government killed at least 100 protesting Iranians and arrested more than 1,000.

Rumors are circulating that the protests were actually engineered by hardliners in the regime who seek to push the current government into adopting even more repressive and aggressive polices. There have even suggested hard-liners wanted to use the protests to convince the government to launch a preemptive military strike, possibly against Saudi Arabia or Israel. The idea is that such a wag-the-dog tactic would distract an increasingly dissatisfied citizenry from the nation’s growing domestic woes.

All this sounds like so much conjecture. But if hardline elements did welcome the protests as a crisis “too good to waste,” they have to rue that strategy now. The protests are spinning out of control. The government had to shut down access to the Internet and amp up police oppression to levels unmatched since the “Green Revolution” of 2009.

There is no question that the Trump administration’s “maximum pressure” campaign is backing the regime further and further into a corner. The heavy sanctions and political isolation has made the regime more politically vulnerable and weakened its ability to fund proxies and build up its military.

“The mounting cost of sanctions is putting more and more pressure on the regime to renegotiate the Obama-era nuclear deal and agree to more substantive restrictions,” argues Heritage Foundation Middle East expert Jim Phillips. But Phillips does not expect the mullahs to agree to negotiations until after the 2020 U.S. presidential election.

This is where North Korea comes in. The Iranian regime must be closely watching how the U.S. handles its negotiations with Pyongyang, looking for clues as to what treatment it might expect in future dealings with the Americans.

For the tough guys in Tehran, the best case scenario is that Trump loses next November and that the new U.S. leader is willing to fold and go back to the Obama-era deal.

The second-best hope is that the U.S. caves in denuclearization talks with North Korea, setting a precedent for going soft on Iran.

North Korea apparently still hopes it can bully the U.S. out of sticking to its demand for a total denuclearization. Instead, they want to go back to a negotiating framework where sanctions are lifted first — and then the negotiations begin.

To nudge America in this direction, the North Koreans have been busy brushing-off talks, harrying the South Koreans; and firing the occasional missile into the sea.

So far, however, the U.S. doesn’t seem to be budging. And it shouldn’t.

Staying tough with North Korea serves a dual purpose: It keeps Pyongyang in check, and sends Tehran a strong signal that they shouldn’t expect a sweetheart deal either.

Maintaining maximum pressure is the best strategy for restraining the chief source of misery and instability in the Middle East. Securing a peaceful, stable Middle East is a vital national interest. If we want to accomplish that other than by being the world’s policeman or fighting World War III, we need to show persistence in keeping the pressure on the mullahs.