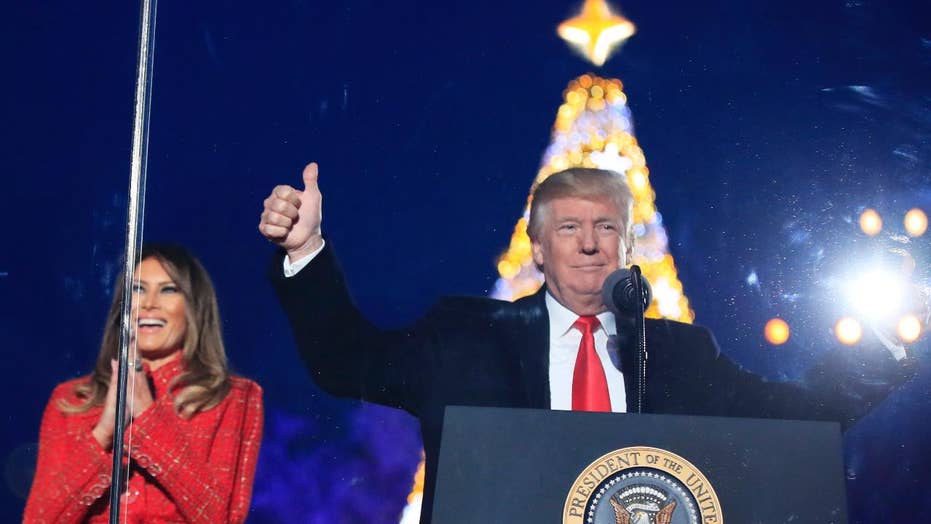 Is President Trump winning the war on Christmas?

Since the early days of his campaign for president, Donald Trump has received an enthusiastic response from crowds when talking about his concerns about Christmas.

“You go to stores, you don’t see the word ‘Christmas’,” he said last year. “It says ‘Happy Holidays’ all over. I say, ‘Where’s Christmas?’ I tell my wife, ‘Don’t go to those stores.’ I want to see ‘Christmas.’”

As president, Mr. Trump has made good on his promise to roundly and regularly talk about Christmas by name. In response, supporters have expressed their enthusiastic approval, with some even spelling out the Yuletide greeting of “Merry Christmas” in large letters at stadium rallies.

Loyalists call it a matter of truth – and a victory in the “War on Christmas.”

Detractors call it a trope – a gimmicky and fabricated distraction to whip up popular support amongst the president’s base.

To be sure, the holiday of Christmas has come a long way since that first starry night over two-thousand years ago. Today, the shepherds and wise men might be hard-pressed to recognize even the most devout celebration.

When I hear President Trump promising to make the phrase “Merry Christmas” popular and acceptable again, I find myself wondering if people truly appreciate the profound power and significance of the greeting itself.

In fact, in the early days of Christianity, Jesus’ birth didn’t receive much attention, if at all. As it was, the Church fathers were more interested in the day a person died than the day they were born.

That all began to change in the fourth century when Christian clergy repurposed the pagan celebration of the winter solstice and declared December 25th to be the day to honor Christ’s birth. In other words, the choice of day was arbitrary. Basically resigned to the fact that people were going to celebrate anyway, it was an attempt to reclaim and redeem something secular for something divine.

Fast forward nearly two millennia to Christmas’ modern-day trappings, and one might be hard-pressed to reconcile many of our beloved traditions with any deep spiritual roots. From brightly lit trees to Santa Claus and the frenzy of Black Friday shopping, there’s no question that Christmas has grown more secular with time. Even an optimist would have difficulty refuting Lucy Van Pelt’s 1965 lament in "A Charlie Brown Christmas" when she complained the holiday had become nothing more than “a big commercial racket.”

So, when I hear President Trump promising to make the phrase “Merry Christmas” popular and acceptable again, I find myself wondering if people truly appreciate the profound power and significance of the greeting itself.

Said more bluntly, despite all the controversy his comments have stirred up, and assuming the president wants to restore an appreciation for the true meaning of Christmas to the public lexicon, is he going far enough in his campaign?

In the Christian context, “mass” is a death sacrifice. It’s referring to Jesus’ crucifixion on Good Friday and, of course, his glorious Resurrection on Easter Sunday. As Christians, we believe that Jesus’ death pays the price for our sins, absorbing our guilt and in return, we share in His eternal glory.  Put even more succinctly, my friend Dr. Tim Keller says, “Jesus lived the life we should have lived and died the death we deserved to die because of sin, so that God could accept us.”

Of course, Christians aren’t celebrating Easter on Christmas per se, but the fact of the matter is that without Christ’s eventual Resurrection 33 years later, His birth in Bethlehem wouldn’t be a story at all, let alone a holiday universally celebrated by the world’s 2.3 billion followers of Jesus of Nazareth.

It is a good thing that we embrace the tried and traditional salutation of old, but may we never lose sight of the profound truth it contains. It was the writer C.S. Lewis who summed up the miracle best, suggesting that on Christmas we remember that “The son of God became a man to enable men to become sons of God.” This is no small claim but it's one that Christians believe is not only true, but a truth that changes your life and mine.

So, from my family to your family, Merry Christmas!