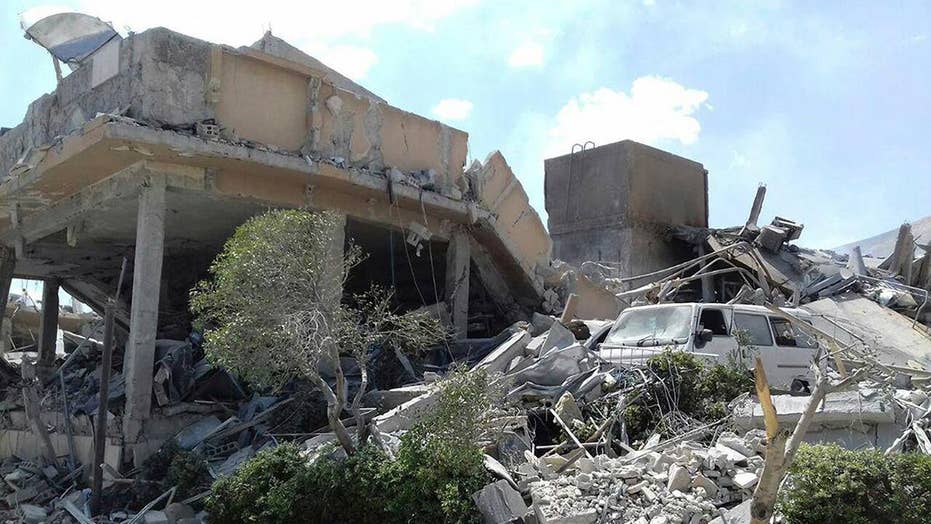 What's next for US troops in Syria after strikes?

Iran has been filling the airwaves and the Internet with anti-American lies, slander and ridiculous conspiracy theories since the U.S., Britain and France launched missile strikes on Syria April 14 in response to dictator Bashar Assad’s use of chemical weapons to kill his own citizens

Approximately one hour after the multinational military campaign began to punish the Assad regime for chemical weapons use, U.S. Secretary of Defense James Mattis issued a warning about an impending deception operation by Iran. His prediction turned out to be accurate.

“We fully expect a significant disinformation campaign over the coming days by those who have aligned themselves with the Assad regime,” Mattis said. What the secretary might have added, however, is that Iran’s attempt to spin the strike is simply the latest lie in its larger ideological war against America.

Iranian propagandists have been working overtime since the strikes against Assad’s chemical weapons infrastructure to paint America as being in league with ISIS and Al Qaeda. Absurdly, they posit that ISIS is an American creation. Such invective is contrasted with a lionization of Iran’s role in the region.

Supreme Leader Ayatollah Ali Khamenei explicitly called the leaders of the U.S., Britain and France “criminals” for their strike against Syria. The Iranian leader proclaimed: “Much like in the past, the Islamic Republic will be present alongside resistance groups, and America’s goals in the region will be defeated.”

Conveniently, Khamenei omitted reference to the sectarian slaughter that Iran-backed “resistance groups” – like Shiite militias – have already perpetuated in the region. He also failed to reference the causal chain between Iran’s supply of men, money and munitions to various Middle Eastern countries and the perpetual war that local populations face. What could be more criminal than that?

Both branches of the Iranian military also issued news releases condemning the missile strikes. One such statement drew on the popular but nonsensical conspiracy theory alleging U.S. support for Middle Eastern terror groups. It said that “whenever the terrorists have been involved in a dire condition in anti-terrorism fights in Syria and Iraq, the US together with some Western countries have entered the scene to compensate terrorists’ defeats.”

In a post-strike phone call with Russian President Vladimir Putin, Rouhani described the military operation against Assad as a way to relieve pressure on Syrian terror groups. The similarly styled “moderate” Iranian Foreign Minister Mohammad-Javad Zarif was not far behind. In a phone call with his British counterpart, Zarif reportedly said the strike occurred “right at the time when the Syrian army had the upper hand against the terrorists.”

Such statements – which aim to dampen the impact of already limited U.S. military action in Syria – underscore the necessity for a U.S. diplomatic offensive against Iran.

In principle, this task should not be challenging. President Trump has already embraced the bully pulpit against the Islamic Republic. The Trump administration has also rightly framed the threats the Iranian regime poses to its own people as well as to the region as part of America’s comprehensive Iran policy, which was unveiled this past October.

Now the Trump administration’s strategy must be taken off the shelf and used against the Islamic Republic in a more creative manner if it is to generate policy results.

On the anti-ISIS campaign, the U.S. has played an outsized role in fighting ISIS and recapturing much of the land the terrorist group had seized. U.S. officials should not be shy about taking credit for this.

Now America must not permit Iran – our chief Middle Eastern adversary – to inherit the gains of yet another hard-fought war. Simultaneously, U.S. lawmakers should refocus their attention on draining the coffers of Iran’s Islamic Revolutionary Guard Corps and its vast array of Shiite militias.

On Syria, Iran continues to frame its intervention there in three ways: religious, strategic and legal. Each one of these should be habitually challenged by U.S. government-funded Persian-language media outlets, as well as by U.S. officials.

More importantly, the U.S. does itself no favors by hyper-focusing on the killing of Syrians by chemical weapons, when Iran has a free hand to support Assad’s conventional means to slaughter his own people.

It’s estimated that more than 400,000 people have been killed in the Syrian civil war – with chemical weapons responsible only for a relatively small number of those deaths.

Communicating to the Iranian people about the high price they are paying for their nation’s military intervention in Syria can function as a domestic pressure point against the Iranian regime. During the recent wave of protests, Iranians chanted highly nationalistic slogans rebuking the Islamic Republic’s foreign entanglements.

As I have previously written: “Consistently highlighting the cost of Iran’s intervention in Syria, be it in terms of blood, treasure, or national reputation, might invigorate the population to return en-masse to the streets. It would also signal solidarity with the countless Iranians whose cries of ‘Abandon Syria, think about us’ during the 2017/2018 protests were derided by pro-IRGC (Iranian Revolutionary Guard Corps) outlets.”

In his statement announcing missile strikes on Syria, President Trump rightly singled out Iran and Russia, asking: “What kind of a nation wants to be associated with the mass murder of innocent men, women, and children?”

Iran should be forced to answer this question in international forums. The next time Iran’s Foreign Minister Zarif mentions the Iran-Iraq War, it must be asked: How can the foreign minister of a country that previously suffered devastating chemical attacks continue to support another state that uses these weapons so unabashedly?

It remains to be seen if the U.S. will ever broaden the scope of its military operations in Syria beyond the anti-ISIS campaign or to punish Assad’s chemical weapons use. But Iran’s narrative about its involvement in Syria and gross misrepresentation about American aims necessitates a powerful and cogent U.S. response. If anything, this is the one domain of the Syrian war the U.S. cannot avoid.