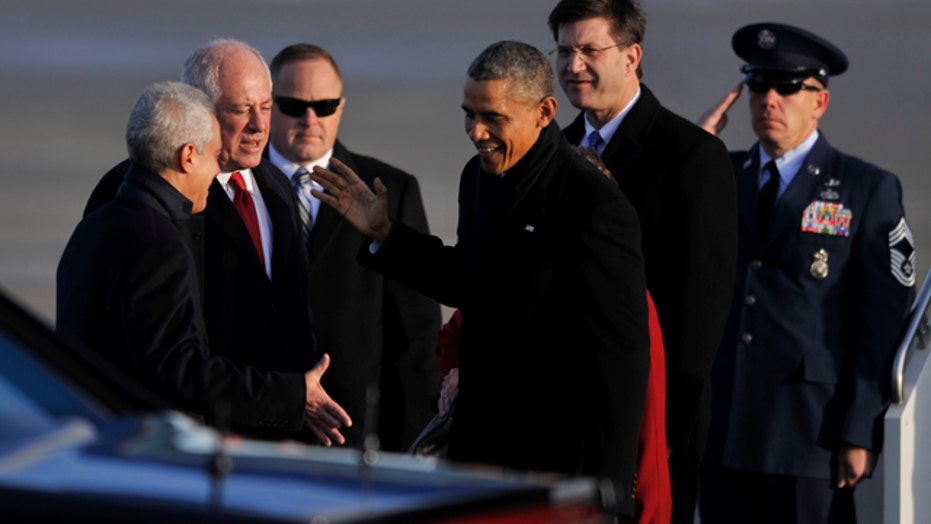 Obama trying to sell his immigration plan in Chicago

As we celebrate Thanksgiving, we continue the tradition started by America’s early immigrants. Those intrepid settlers’ success creating a new society helped spur waves of immigration that continue to this day.

As we renew the debate over immigration policy, our history provides guidance for how we might effectively champion our immigrant heritage while promoting domestic prosperity. [pullquote]

The Pilgrims’ tradition of Thanksgiving continued as the first fledgling settlements took root in the New World and flourished into the independent United States of the late 18th century. Whether they were descended from early colonists or were more recently off the boat, our founding generation enjoyed a unique heritage – their national DNA was comprised of individuals who had braved hardships in order to find a better life. But not everyone was welcome to join them.

Immigration policy has always been a balancing act in the United States. Since our beginning, we have struggled with whom to let in. Our nation’s first leaders took a rather practical stance – they welcomed only those who would benefit the nation.

Legal immigration was viewed positively. But for all their idealistic words about “the wise policy of these states to extend the protection of their laws to all . . . and to admit them to a participation of civil and religious freedom,” our first leaders were also utilitarian.

The nation’s first immigration law, the Naturalization Act of 1790, was passed by Congress and duly executed by President George Washington.

Faithfully abiding by Congress’s law, President Washington welcomed people “of good moral character” who would better the country while readily assimilating with its culture.

He grandly proclaimed that “The bosom of America is open to receive not only the opulent and respectable stranger, but the oppressed and persecuted of all nations and religions, whom we shall welcome to a participation of all our rights and privileges,” but he added “if by decency and propriety of conduct they appear to merit the enjoyment.” That was an important “if.”

While the Founders were far from a monolithic group, the notion of accepting those who would 1. contribute, and 2. assimilate, was a fairly common one.

James Madison summed up their rationale: “It is no doubt very desirable that we should hold out as many inducements as possible for the worthy part of mankind to come and settle among us . . . . But why is this desirable? Not merely to swell the catalogue of people. No, sir, it is to increase the wealth and strength of the community.” He wanted to include those beneficial individuals “without adding . . . the people we are [not] in want of.” But how did they sort the “worthy” from the unworthy?

Alexander Hamilton, an immigrant himself, favored a trial period.  He wrote, “The influx of foreigners … tend[s] to change and corrupt the national spirit; to complicate and confound public opinion; to introduce foreign propensities.”

Therefore, he wanted the individuals to prove themselves over time. “Some reasonable term ought to be allowed to enable aliens to get rid of foreign and acquire American attachments; to learn the principles and imbibe the spirit of our government; and to admit of a probability at least, of their feeling a real interest in our affairs. A residence of not less than five years ought to be required.”

In fact, the Naturalization Act of 1798 required 14 years of residence. Citizenship was something to be earned through a lengthy legal process.

According to the founding generation, potential citizens might demonstrate their commitment to integration by obeying laws, learning English, and contributing to the American economy.

As a proponent of industrialization, Hamilton was particularly eager to welcome those with knowledge of new British industrial techniques – a parallel to the U.S. economy’s demand for today’s highly skilled “new economy” workers. But the broader analogy works for any area of the economy that requires labor, whether skilled or otherwise.

As we seek to amend our failing immigration policy, these precedents provide guidance. We have obviously progressed, broadening the understanding of citizenship beyond white men, but our first leaders’ fundamental principles of citizenship might still be instructive within today’s evolved social context.

Our Founders’ words suggest we might adopt policies that welcome industrious, law-abiding individuals who will not only benefit the nation by filling particular social or economic roles but who will also assimilate into the broader American culture.

The "New Colossus" sonnet inscribed on the Statue of Liberty was not written for a century after America’s founding. But if our Founders had written it, they might instead have added a practical (and provocative) caveat, instead saying ‘"Give me your tired, your poor, your huddled masses yearning to breathe free . . . as long as they will assimilate and benefit the country.”

Logan Beirne is an Olin Scholar at Yale Law School and author of "Blood of Tyrants: George Washington & the Forging of the Presidency" (Encounter Books 2013).