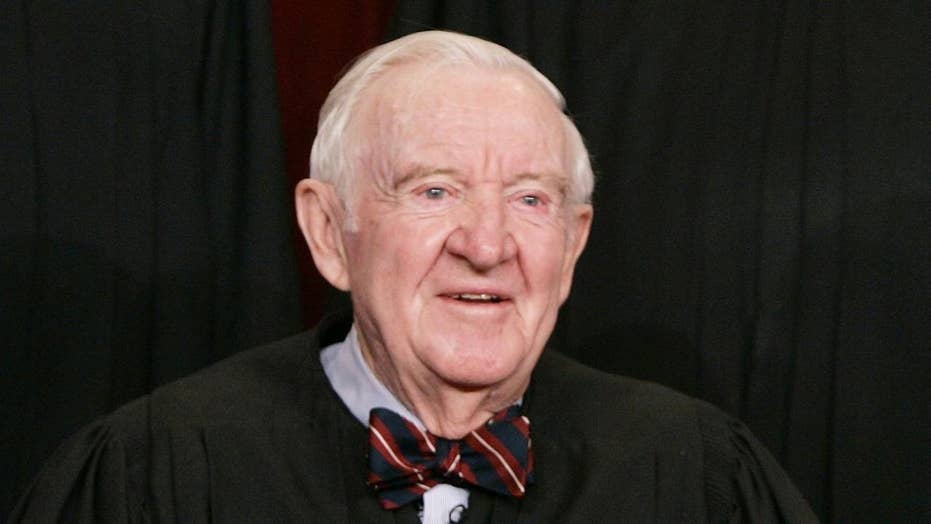 Retired Supreme Court Justice John Paul Stevens is calling to repeal the Second Amendment. A look at his reasoning and why he argues it should be repealed.

The startling new proposal by 97-year-old former Supreme Court Associate Justice John Paul Stevens calling for the repeal of the Second Amendment to our Constitution’s Bill of Rights is unwise, dangerous and totally unrealistic. For 227 years, the amendment has guaranteed that “the right of the People to keep and bear arms, shall not be infringed.” We should not abandon it.

The first 10 amendments to the Constitution make up the Bill of Rights. These amendments are the foundation of our liberty and the lasting legacy of the Founding Fathers who so wisely created a Constitution designed to protect the freedom of generations far into the future. These rights are a major factor in what makes America an exceptional nation and a beacon for freedom that attracts people from the world over.

Once we begin whittling away at one of our rights in the Bill of Rights, what’s to stop the erosion of the others? Freedom of speech? Freedom of religion? Changes like this wouldn’t be minor tinkering – they would amount to major disfigurement of America’s foundational document, equivalent to amputating a person’s arm or leg.

Stevens made his radical call in an op-ed in the Tuesday edition of The New York Times, reacting to massive demonstrations in Washington and around the country held Saturday to oppose gun violence and demand stricter gun control laws.

The hidden argument in Stevens’ pitch is this: An individual’s sacred right to self-defense, to the defense of innocents and against government, boldly embodied in the Second Amendment, is transferable to government.

“These demonstrations demand our respect,” Stevens wrote. “They reveal the broad public support for legislation to minimize the risk of mass killings of schoolchildren and others in our society.”

Stevens wrote that he was impressed by “the civic engagement” of “schoolchildren and their supporters” against violence, leading him to suggest we “repeal the Second Amendment.”

The retired justice said he believes that “simple but dramatic action would move Saturday’s marchers closer to their objective than any other possible reform.”

Yes, that’s true – but only if the objective of these young people is to end every citizen’s right to self-defense and defense of others, and to fundamentally empower the federal government to abuse the American people. Many of the young people speaking at Saturday’s rallies said they wanted more restrictions on guns, but didn’t call for going so far as to repeal the Second Amendment.

America’s Founders, who fought to win our freedom from Britain and to secure ratification for our Constitution and Bill of Rights, would be dumbstruck at Stevens’ blithe default to trust in an all-powerful government, rather than in the good sense and responsibility of “We, The People.”

How simple life would be without the Bill of Rights. Getting rid of our First Amendment would free government of nettlesome critics, end the bother of respecting religious worship, shut up the press, and clamp down on protests like the ones held by young people and their supporters last weekend.

Ending the Fourth, Fifth and Sixth Amendments would allow the federal government to go after any person the government suspected, doubted or disliked; search and seize life and effects at will; force confessions of crimes; and do away with fair trials, confrontation and protections against imprisonment.

How nice life would be – for the government – if we did away with the nag and drag of rights contained in the Bill of Rights, a sacred distillate of natural law and 800 years of Western defense for these individual liberties.

Stevens’ bizarre proposal is outright advocacy of prostrating citizens before a federal government armed to the teeth. Recall the timeless words of British politician Lord Acton in 1887: “Power tends to corrupt, and absolute power corrupts absolutely.”

No wonder the man of peace, Mahatma Gandhi, defended every individual’s right to bear arms. Recalling how Indians were disarmed by the Arms Act of 1879, Gandhi wrote: “Among the many misdeeds of the British rule in India, history will look upon the act of depriving a whole nation of arms as the blackest.”

The idea that we should correct an absence of responsibility by the few through empowering government to strip rights from the many is more medieval than modern – a license to lawlessness, not a defense of legal and moral rights.

The hidden argument in Stevens’ pitch is this: An individual’s sacred right to self-defense, to the defense of innocents and against government, boldly embodied in the Second Amendment, is transferable to government.

Alas, life of a free citizen is hard. It is not about repealing rights, but about learning to use our God-given, constitutionally protected freedoms responsibly. That is why the retired Supreme Court justice is wrong. The fault is not in the Bill of Rights, but in ourselves.