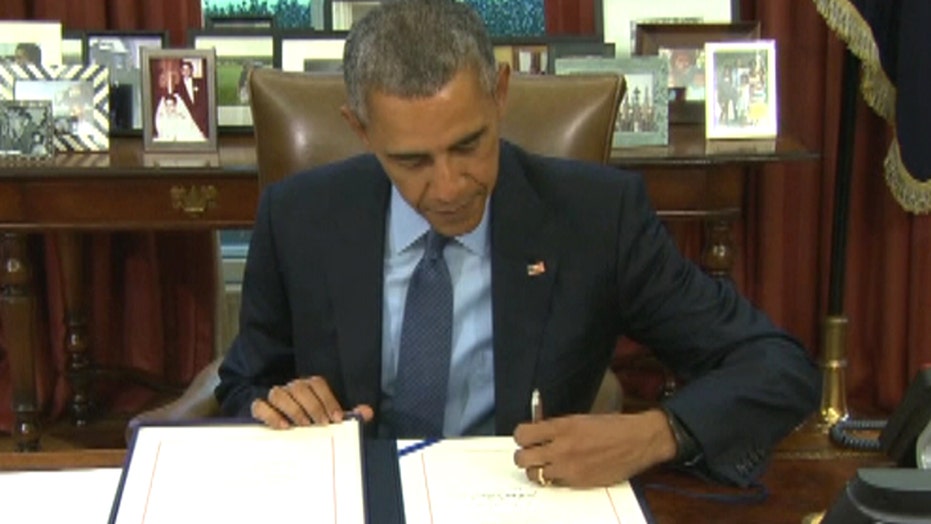 Obama: No better Christmas present for the American people

Yet Republicans in Congress think we should celebrate? This is crazy! Instead of passing this disastrous “fiscal cliff” budget deal, maybe Congress should throw it off a cliff.

As the civilized world watches the horrors of Paris, Syria, and San Bernardino, the cancer of radical Islam continues to spread. Yet this $1.1 trillion new spending bill fully-funds President Obama’s refugee relocation program, protects Obama’s unconstitutional executive amnesty, preserves the dangerous nuclear deal with Iran, strengthens federal support for sanctuary cities, and completely absolves Obama from any responsibility to secure the border. It also includes a $1.6 billion earmark to resettle illegal immigrants in the U.S.

The American people are frustrated and furious because the louder we scream; the more Washington politicians plug their ears and ignore our voices. Why are we building mosques in the Middle East while roads and schools in Middle America crumble? Why are we robbing seniors and veterans of their hard-earned benefits to give handouts to illegal immigrants? It’s time we put Americans first.

Instead of holding President Obama accountable, Congress transformed this budget deal into a Christmas tree covered with shiny ornament handouts and presents underneath for every lobbyist, well-connected corporation and liberal interest group. Everyday Americans didn’t get anything, but a slap in the face.

Instead of holding President Obama accountable, Congress transformed this budget deal into a Christmas tree covered with shiny ornament handouts and presents underneath for every lobbyist, well-connected corporation and liberal interest group. But everyday Americans didn’t get anything, but a slap in the face.

If this is a “victory” for Republicans, then why waste time electing Republicans to the House and Senate?

Tucked away in this deal is also a massive assault on America's workers.  It expands the pro-amnesty, H-2B foreign worker program by increasing the number of visas for foreign workers by 400 percent. I have no idea why any Republican would support immigration programs that import foreigners to replace American workers and drive American wages lower than the Dead Sea!

Why would we import foreigners to steal blue-collar jobs for Americans in trucking, construction, dining, and the hotel industry? Why would we drive down middle-class wages and increase the number of unemployed Americans? Obama's job-killing agenda has done enough damage, and it’s time for Republicans to wake-up and reject these horrible H-2B programs. Americans come first.

The Washington establishment attacks me as a “protectionist.” But when it comes to America, I will never apologize for protecting us militarily, economically, culturally and spiritually.

I will wear this label as a badge of honor because the stakes are too high.

This latest fiscal deal is a disgusting embarrassment, even for Washington. It must be rejected, killed and buried.